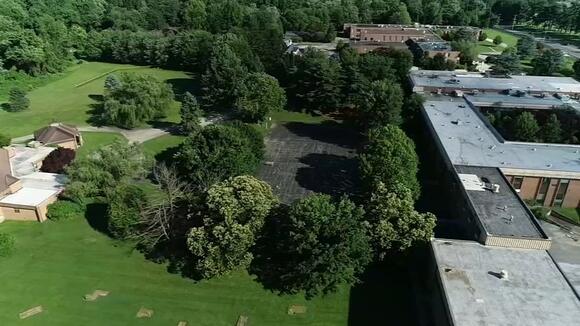 After a battle that had raged on for almost a decade, Delaware County Council said enough. It will now attempt to take a 213-acre crown jewel property in the heart of Delaware County by eminent domain. "We took our cues from the community, which has been working to make sure this gets preserved," said Delaware County Councilwoman Elaine Schaefer. She has been leading the effort to convince council members to take a bold step to take an old-growth forest site along Sproul Road in Broomall, Delaware County, and save it from commercial developers. "We all came together and said, 'Look, this is a once in a lifetime opportunity that's going to be meaningful for this generation, for every generation to come, we're gonna do it,'" said Schaefer. The site, which would become the largest park in Delaware County, had sparked a contentious battle since the Archdiocese of Philadelphia decided to close the Don Guanella School in 2013 and put the property up for sale. Several commercial developments had been proposed for the massive site, but were all rejected by Marple Township commissioners amidst fierce opposition from residents and environmentalists. "This is like winning the lottery in a lot of ways. To suddenly find out, we thought we were going to have to fight this in court for ten years," said environmentalist Ken Hemphill of Save Marple Green Space. "Oh my gosh, I can't even believe it, this has been a long time coming, and we have used everything we could to fight developers," said Broomall resident Maureen Stewart. County Council expects to purchase the massive site from the Archdiocese at fair market value. "What is fair market value? That is to be determined. Is there a ballpark figure? Yes, and it's a pretty big ballpark. What is it? I don't want to speculate right now," said Schaefer. For Charles Protesto, who grew up playing on the land since he was a little boy, this development is a big deal. "Words can't, I can't express what I'm feeling, I really can't. You're about to come to tears? Yes," said Protesto. There could be challenges from the owner and developer. The first reading of the move to take the land will be Wednesday at 6 p.m. during the County Council Meeting at the Delaware County Courthouse.

The recommendation applies to all teachers, students, staff and visitors regardless of vaccination status, when the new school year begins.

Bucks County residents hunkered down during storm: 'It sounded like a bomb went off'

Neighbors in Hopewell Township, Mercer County are cleaning up after a tornado knocked down tree after tree.

"Just look at a bomb went off": A line of severe weather left behind a path of destruction after at least three tornadoes touched down in the Philadelphia region Thursday night.

A line of severe weather left behind a path of destruction after at least one tornado touched down in the Philadelphia region Thursday night.

Tornado Warning in Bucks and Northampton counties in Pennsylvania

LIVE COVERAGE: A Tornado Warning has been issued for Bucks and Northampton counties in Pennsylvania until 5:45 p.m.

Pennsylvania Governor Tom Wolf says he is not considering a new statewide mask mandate, nor will the state require masks in schools.

In an effort to quell rumors, officials said that a massive home explosion in West Brandywine Township on July 21 was not sparked by criminal activity.

In a decision that's already sparked debate in the Delaware Valley, the Centers for Disease Control and Prevention revised its guidance on mask-wearing this week.

The Central Bucks School District, one of the largest districts in Pennsylvania, voted to make masks optional for the upcoming school year regardless of vaccination status.