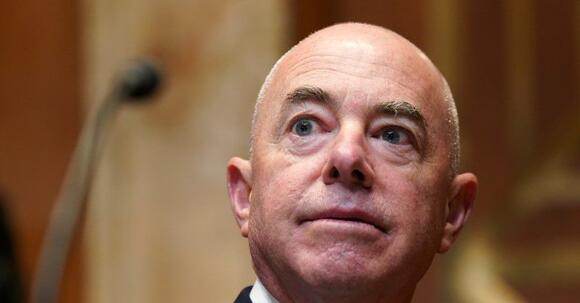 The Homeland Security secretary's remarks during a visit to Mexico City come amid months of high migration that has become an early policy challenge for U.S. President Joe Biden, as hundreds of thousands of people flee violence and poverty in Central America and parts of Mexico.

Mayorkas said both Mexico and the United States were working to curtail irregular migration.

"We have challenged one another," he told a news conference. "It's not just a question of the U.S. asking of Mexico, it's a matter of what we both can do."

Echoing Vice President Kamala Harris's comments to migrants during a visit to Guatemala last week, he said the government has sent a clear message to migrants: "Do not come." read more

He emphasized that the government is working on alternatives he described as "lawful pathways," listing programs such as temporary worker visas and U.S. investment to tackle violence, corruption and weak economies in the countries with high migration rates.

"We are devoted and dedicated to bringing different types of relief," Mayorkas said.

Critics said the U.S. government was sending mixed messages that could fuel further migration, after Harris described the United States as a safe haven for asylum seekers only days after warning migrants they would be turned back at the border.

Mayorkas noted that Title 42, a COVID-19 health order implemented under former U.S. President Donald Trump to slow migration during the pandemic, would remain in place as long as needed for public health reasons.

Biden has faced growing pressure from migrant advocates and health experts to end the policy as more evidence emerges that migrants are being expelled into danger in Mexico. read more

Mayorkas added that his department would be prepared to address border issues once the order is lifted.

"It's not a tool of immigration policy," he said.

In meetings with Mexican Foreign Minister Marcelo Ebrard and other top Mexican officials, Mayorkas also discussed speeding up vaccinations at the border amid efforts to phase out pandemic-related travel restrictions.

The United States is not considering requiring a so-called vaccine passport for crossings, he said.

Trump on Tuesday said he would visit the Texas-Mexico border this month with Texas Governor Greg Abbott, after both complained about a rise in migrants crossing into the United States.

(CNN) — A sitting president of the United States is usually the person who drives political conversation. Former presidents tend to be an afterthought. But even as we stand more than six months into Joe Biden's administration, the President is fighting for attention with his predecessor, Donald Trump, to a degree not seen in recent history. The impact of this dynamic could upend expectations about the midterm elections.

WASHINGTON (Reuters) - The United States on Friday resumed fast-track deportation flights for migrant families that recently arrived at the U.S.-Mexico border, amid a sharp increase in the number of migrants at the southern border. The Department of Homeland Security said in a statement the flights would transport Guatemalan, Honduran...

MEXICO CITY — Frustrated by raging violence, the Mexican government is seeking to overhaul the Merida Initiative, a $3 billion US aid program that’s been the centerpiece of security cooperation between the two nations for more than a decade but that’s failed to reduce bloodshed. Mexican officials say they have...

Advocates end work with US to pick asylum-seekers in Mexico

Vice President Kamala Harris released a sweeping strategy on Thursday to address the root causes of migration amid the recent surge in illegal U.S.-Mexico border crossings. The strategy promises more sustained efforts to address motivations for migration, including refocusing engagement with Central America. The White House also released a "Collaborative...

A duo of top House Republicans unveiled a proposal Thursday to address the migrant crisis at the southern border by finishing construction on former President Donald Trump’s signature border wall. The Border Security for America Act, brought forward by Rep. John Katko (R-NY), the top Republican on the House Homeland...

At this point, it’s not quite accurate to say there’s a crisis at the border. The situation is much worse than that. As a result of the policy changes enacted by the Biden administration, combined with an utter lack of planning or foresight about what those policies would produce, the border is now in chaos — and getting worse by the day.

U.S. Border Patrol Has Stopped Over 19K Nicaraguans at the Border, a New Record

Record numbers of migrants coming into the United States from Nicaragua have been recorded in recent months, according to Customs and Border Protection data, a major increase as the central American country attracts international criticism over arbitrary arrests and human rights abuses. In June, U.S. authorities made contact with 7,425...

TIJUANA, Mexico -- They labor in factories in Mexico producing goods U.S. consumers enjoy. But where American communities are awash in unused coronavirus vaccines, Mexican workers are often hard-pressed to find a single shot. On one recent morning, however, hundreds of workers from the factories known as maquiladoras were waved...

Mexico says security initiative with US doesn't work, is 'dead'

Mexico’s foreign minister in an interview published Thursday declared that a years-long, $3 billion security initiative with the U.S. is “dead,” saying that officials are looking to develop a new agreement to better address growing concerns over crime. Marcelo Ebrard told The Washington Post that the Merida Initiative, launched during...

The Senate confirmed Ur Jaddou to serve as US Citizenship and Immigration Services director on Friday, delivering the agency a permanent head -- and the first woman to hold that position -- after years of acting leadership. As the Biden administration has rolled out a series of immigration measures over...

EL PASO (Reuters) - When U.S. military veteran Ramon Castro began meeting deported veterans living along the U.S.-Mexican border not far from his home in Southern California, he knew that, but for a piece of paper proving his citizenship, he could have been one of them. He’s now in the...

WASHINGTON, July 21 (Reuters) - The U.S. government on Wednesday extended the closure of land borders with Canada and Mexico to non-essential travel such as tourism through Aug. 21 even as officials debate whether to require visitors to have received a COVID-19 vaccine. The latest 30-day extension by the Department...

Why Are Republican Governors Sending National Guard to the Border?

Can a Nebraska highway cop arrest someone in Texas? Are there really more border-crossers now? An attempt at answering simple questions about a complicated topic.

WASHINGTON, July 13 (Reuters) - U.S. Vice President Kamala Harris met on Tuesday with Democratic Texas lawmakers who left the state and told them their "courageous stand" to derail Republican efforts to enact voting restrictions was like efforts throughout U.S. history of civil rights activists and suffragettes. "Defending the right...

The Department of Homeland Security (DHS) on Monday re-designated Somalia in the Temporary Protected Status (TPS) program, which allows some Somalis in the United States to work and live in the country. DHS Secretary Alejandro Mayorkas extended the Somalian TPS designation for 18 months starting in September, when the current...

The Biden administration faces the possibility of another immigration headache, as it weighs whether to more widely reopen US borders in the near future -- just days from the current travel restrictions expiring.

POLITICO obtained a copy of the alleged agreement, which surfaced as the Biden administration weighs reducing military aid to Cairo.

As the U.S. emerges from the pandemic, migrants from Europe and Asia are journeying to the U.S.-Mexico border in search of health and economic opportunity.