GOP senator: I want to make Biden a 'one-half-term president' 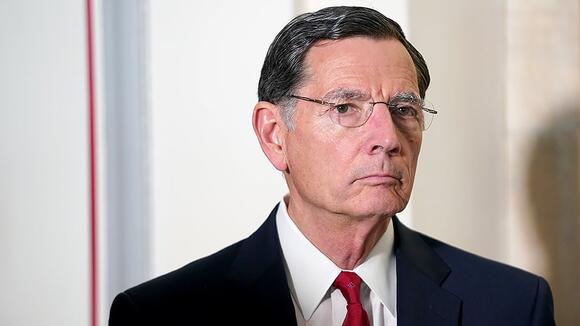 Republican Sen. John Barrasso (Wyo.) last week said he wants to make President Biden a “one-half-term president” in 2022 by ensuring that Democrats no longer have complete control in Washington.

“I’m looking forward to a very successful 2022,” Barrasso said during a breakfast discussion hosted by The Ripon Society on Thursday.

“I want to make Joe Biden a one-half-term president, and I want to do that by making sure they no longer have the House, Senate and White House,” he added.

When asked if Barrasso was advocating for removing Biden from office before his first term is up, Laura Mengelkamp, the senator's communications director, told The Hill he was referring to the GOP winning the House and Senate next year, which would take away Democratic control of Washington and help Republicans win the White House in the next general election cycle.

“Sen. Barrasso’s remarks discussed his work to make sure Republicans take both the Senate and House in 2022, which would be the best way to effectively stop President Biden from moving his liberal agenda post-midterms, and position Republicans to win the White House in 2024,” Mengelkamp told The Hill.

Barrasso noted that Senate Minority Leader Mitch McConnell (R-Ky.) made similar comments about wanting former President Obama to be a one-term president on the eve of the 2010 midterm elections.

“Mitch McConnell came under a lot of criticism for saying at one point he wanted to make sure that Barack Obama was a one-term president,” Barrasso said.

White House deputy press secretary Andrew Bates responded to Barrasso’s comment in a statement to The Hill, writing that Biden “looks forward to continuing to deliver for the American people, continuing to make government work for them again, and continuing to bring our country together – after having reduced cases of the worst public health crisis in over a century by more than 90%, signed historic economic legislation that helped fuel unprecedented job growth for any administration’s first 100 days in office, protected Americans’ health care, and restored our leadership and competitiveness in the world.”

Barrasso, who serves as chairman of the Senate Republican Conference, also attacked the Senate Democratic Conference for not making efforts to attract Republican cooperation, accusing the party of “heading as far to the left as they can.”

“There’s a 50-50 Senate, which should be a mandate to move to the middle. Instead, they seem to be heading as far to the left as they can,” Barrasso said.

Barrasso also weighed in on the infrastructure battle transpiring in Washington as the White House and congressional negotiators work to land a bipartisan package.

A chief sticking point among the parties has been how to pay for the infrastructure investments. Barrasso, during the breakfast discussion, advocated for an infrastructure package to be paid for with repurposed COVID-19 funding, which the White House previously said it would not lean toward.

“There’s a lot of money out there that, as [Sen.] Roy Blunt [R-Mo.], who's on the Appropriations Committee, is pretty clear about, is orphaned money from the first five bipartisan coronavirus relief bills that are pretty specific in how they need to be spent — and it’s never going to be spent,” Barrasso said.

“We have to repurpose that. There’s a lot of money in the more recent Joe Biden coronavirus bill that is either unneeded or unrelated to coronavirus that is meant to basically pay off and bail out big cities. The money isn’t even going to go out for another couple of years,” he added.

Sylvan Lane contributed to this report.

Joe Biden was caught-off guard on Friday and had to be told there was something on his chin by an aide. The US president, who was in a meeting with governors and officials, received a card with a hand written note saying: “Sir, there is something on your chin”. The incident, which happened as his vice president Kamala Harris was addressing officials on the issue of wildfires, was caught on camera – and immediately went viral on social media. Mr Biden appeared to eventually remove whatever was on his chin, and was seen rubbing his face to remove the...

Pelosi and Sanders brace for Democratic upheaval over Biden agenda

Once the Senate passes a bipartisan infrastructure deal, Democrats' path forward on two spending bills could get messy.

(CNN) — A sitting president of the United States is usually the person who drives political conversation. Former presidents tend to be an afterthought. But even as we stand more than six months into Joe Biden's administration, the President is fighting for attention with his predecessor, Donald Trump, to a degree not seen in recent history. The impact of this dynamic could upend expectations about the midterm elections.

WATCH: Elizabeth Warren Pushes Back on Pelosi, Says Biden ‘Does Have the Power’ to Cancel $50K in Student Debt

President Joe Biden, 78, last week delivered a rambling and bizarre answer to a question from CNN host Don Lemon that prompted renewed questions about his mental acuity. “When will children under 12 be able to get vaccinated?” Lemon asked. Here’s Biden answer (and we swear we’re not making this up):

While 51% of Voters Approve of Biden's Performance, Only 25% Approve of Congress

A recent study by the George Washington University Politics Poll shows that the majority of voters are in favor of President Joe Biden's performance as commander-in-chief, though the job Congress is doing is considerably less popular. The poll, which was released on July 26 shows that 51 percent approved of...

‘Something has to change’: GOP Sen. Graham and Democratic Rep. Cuellar urge Biden to tap Jeh Johnson or someone similar for border czar

Democratic Rep. Henry Cuellar and Republican Sen. Lindsey O. Graham are teaming up to urge the White House to name former homeland security secretary Jeh Johnson or someone with similar credentials to coordinate efforts to combat the influx of migrants to the southern border — a fresh signal of frustration with President Biden’s strategy among prominent lawmakers.

Joe Biden probably knows more about picking judges than any new president in American history. A longtime member and former chair of the Senate Judiciary Committee, Biden oversaw hundreds of judicial confirmations. He chaired the 1987 hearing that successfully convinced the Senate to reject Judge Robert Bork’s nomination to the Supreme Court; then presided over a far less successful hearing that preceded Justice Clarence Thomas’s confirmation in 1991.

While President Biden (D) may have characterized himself as a unifier literally moments after his inauguration, a new poll has shown that the new president has not yet lived up to that promise. The breaking poll reports that 51% of Americans so far, disapprove of Joe Biden’s job as president.

WATCH: Biden Says He Ran for President for 3 Reasons, Forgets to Name One

President Joe Biden trailed off during a Wednesday speech in Pennsylvania, leaving an audience hanging after he promised to remind them of the “three reasons” he ran for the White House. “I said I was running, when I announced my campaign — and not many people took it seriously,” Biden...

Christian Datoc of the Washington Examiner reports on the Biden political team’s electoral strategy. President Joe Biden’s domestic travel schedule appears to have two clear goals in mind: ginning up support for his infrastructure and economic proposals while boosting Democrats’ electoral chances heading into the 2022 midterm elections. Several of...

How the left is handling the Biden presidency

If two years ago I had told you that Joe Biden would defeat Sen. Bernie Sanders (I-Vt.) to become the Democratic presidential nominee and then win the general election, you probably would have predicted a frosty relationship between the Biden White House and Sanders’s large army of supporters, if not open and vicious hostilities. An accommodationist such as Biden was exactly what Berniecrats feared, and they’d surely devote their energies to excoriating his timid centrism and lost opportunities.