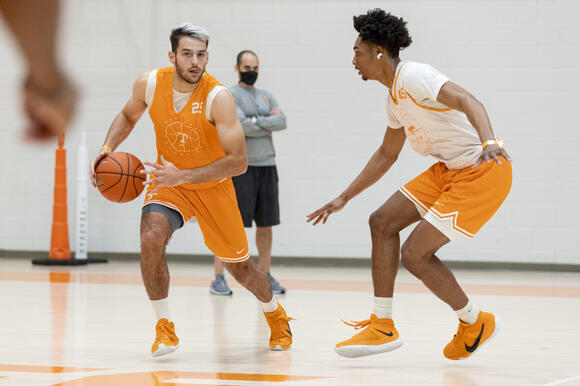 Tennessee guard Santiago Vescovi has been one of several fan-favorite players in Rick Barnes's program over the last few years. Now, Vescovi will have a chance to represent the Vols on a national scale, as he is currently challenging for a spot on Uraguay's Olympic. Below is a quick look at the press release from Tennessee.

"Tennessee basketball junior guard Santiago Vescovi has been selected as one of 16 players vying for a spot on Uruguay's 12-man Olympic qualifying roster.

"Uruguay's current 16-man team begins practice on June 14 and will then cut its roster from 16 to 12 prior to contending for a spot in the Tokyo Olympics field through competing in a FIBA Qualifying Tournament, which is scheduled for June 29 through July 4 in Victoria, Canada."

"The members of Uruguay's final 12-man roster are set to begin competition in group stage games against Turkey and Czech Republic on June 29 and July 1, respectively, before advancing to a bracket stage that will also include Greece, China and Canada. The winner of the bracket stage will earn a spot in the Tokyo Olympics, which are scheduled to run from July 25 through August 7."

Vescovi played through injury at times last season, but he was still a key for Tennessee down the stretch. He played in 27 games last season, while averaging 8.7 points per contest along with 3.7 assists per game

Americans have accused Australia of cheating after they won gold in the women's 4x100 medley relay race. The Aussie swimmers clinched gold in the epic race on the weekend and Kaylee McKeown (backstroke), Chelsea Hodges (breaststroke), Emma McKeon (butterfly) and Cate Campbell (freestyle) stood proud on the podium. However, they...

Simone Biles pulled out of two more events at the Olympics on Saturday, raising major doubts over whether she will compete again in Tokyo as Nigerian sprinter Blessing Okagbare was thrown out after failing a doping test. - Okagbare fails doping test - The morning action at the Olympic Stadium was overshadowed by Okagbare's failed doping test.

THE Olympic Games prides itself on fair play and top conduct as nations from around the world unite for the love of sport. But there was no love lost between Canada and Brazil in the women’s rugby sevens on Thursday. Tensions ran high in Tokyo as Canada romped to a...

Australian basketball player Aron Baynes will have to sit out the rest of the Tokyo Olympics after a “complicated” series of events that started on the court and ended in the bathroom. Baynes, who also plays for the Toronto Raptors, first suffered a neck injury during Australia’s game against Italy...

Fans watching a women’s field hockey game during the 2020 Tokyo Olympics found themselves at the mercy of a cameraman and a cockroach. Here’s the inside field hockey scoop. With a little more than five minutes left in a preliminary round game, Argentina held a 1-0 lead over Spain earlier in the week. Then, the cameraman at the 2020 Tokyo Olympics all of a sudden became fixated on a cockroach.

It is not that often in Olympic boxing that stoppages occur. Now though, with the new rules in recent times and the removal of the head guard, the opportunities for stoppages are more possible. Team USA’s Keyshawn Davis showing as much a short time ago in Tokyo:. Impressive to say...

Pamela Wade was expected to contend for a medal in the 3 meter springboard diving event at the 2020 Summer Olympics in Tokyo. Unfortunately, she did not come to realize that fate. Wade completely botched her final dive in the semifinals and failed to advance to the finals of the...

Sha’Carri Richardson left conjecture over how she would have done in the Olympic 100-meter final to others on Twitter. The American track star, left off the Olympic team for using marijuana, had only positive vibes on Saturday to send to Jamaica’s Elaine Thompson-Herah, Shelly-Ann Fraser-Pryce and Shericka Jackson for their gold, silver and bronze-winning performance in Tokyo.

I've never been as nervous in my life as the day in 2019 I competed to qualify for the Tokyo Olympic Games. Somehow I managed to keep my cool and when it was officially announced that I would be representing Jamaica in gymnastics, it was the best feeling. I was able to finally see my name on that list of qualifiers after years of hard work.

Miami Heat: Kyle Lowry signs with Heat in piece from The Athletic

Kyle Lowry will certainly be on the radar of the Miami Heat this offseason. Most believe he will leave Toronto this offseason, but the question is where will he choose to go?. Many teams will enter the sweepstakes. Lowry is an All-Star caliber, veteran point guard who has the ability to immediately impact winning.

After dropping a pair of exhibition games to Nigeria and Australia, the United States men's basketball team got off to an ugly start at the Tokyo Olympics by losing its group-stage opener to France. It put the U.S. in position to have to win its next two games to make it into the quarterfinal round, which it did, defeating Iran and the Czech Republic by a combined 89 points.

Jayson Tatum took over Saturday in a Team USA Olympic victory over the Czech Republic. Kevin Durant thinks we’re going to see a lot more of that. Tatum has had a fairly nondescript showing in the exhibitions leading up to the Olympics as well as in Tokyo itself. That resulted in him losing his starting job, but he bounced back in a big way Saturday with a 27-point showing, with 15 points coming off 3-pointers.

Kevin Durant, Damian Lillard, and the rest of Team USA dropped their second straight defeat, this time at the hands of Team Australia. After a surprising defeat against Nigeria on Saturday, the might national team couldn’t bounce back and fell flat against Patty Mills, Joe Ingles, and the rest of the team from down under in a tough 91-83 loss.

Team USA held on for a big 119-84 win over the Czech Republic on Saturday to march their way into the quarterfinals of the Tokyo Olympics. While it was an impressive team performance, it was Boston Celtics star Jayson Tatum who led the charge with an international career-high 27 points.

The women's gymnastics is always one of our favorite events at the Olympics, and at this year's Games, Team USA is one of the best it's ever been. With Simone Biles leading the charge, you know watching the competition is going to be impressive. With the Olympics taking place in Tokyo, though, some of the event times might be hard to keep track of, but don't worry, we've put together a schedule of when to turn on your TV to catch the women's gymnastics in action.

Team USA took home more golds in swimming on the eighth day of the Tokyo Olympics, with swimming powerhouse Katie Ledecky wrapping up her second gold – and fourth medal – at the Tokyo Olympics. She is now one medal away from tying the all-time medal count for a U.S. female swimmer.

TOKYO (AP) — Transgender weightlifter Laurel Hubbard finally got to compete at the Tokyo Olympics. It didn’t last long, but it was significant. Hubbard couldn’t complete any of her first three lifts on Monday night, ruling her out of medal contention in the women’s over-87-kilogram division. Hubbard made a heart...

How to Watch USA Basketball vs Spain (Olympic Quarterfinals)