By Emily Brooks
Posted by
WashingtonExaminer
2021-06-15 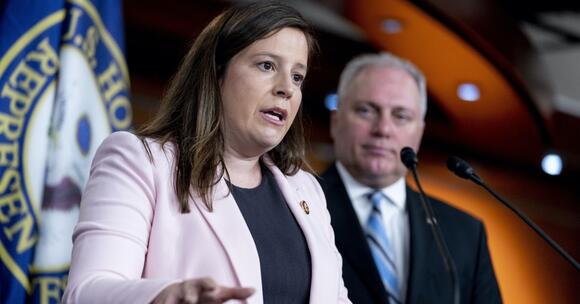 Stefanik, the No. 3 House Republican, brought up Schiff, the top Democrat on the House Intelligence Committee, after she was asked about reports that former President Donald Trump’s Department of Justice seized phone records from members of Congress, aides, and reporters.

“Let's also be perfectly clear, here, that Adam Schiff, as chairman of the House Intelligence Committee, released information regarding the ranking member Devin Nunes’s phone calls, as well as reporters',” Stefanik said. “That is unethical. Frankly, I believe that's illegal.”

Democrats on the committee said at the time that they did not subpoena records from Nunes and Solomon and that those records showed up in other subpoenaed material.

That differs from what the New York Times reported last week, which said that members of Congress’s records were directly subpoenaed by the Department of Justice.

Department of Justice prosecutors in 2017 and 2018 “subpoenaed Apple for data from the accounts of at least two Democrats on the House Intelligence Committee, aides, and family members” during a leak investigation, the report said, and that “the records of at least a dozen people tied to the committee were seized.”

Directly addressing reports of actions from federal prosecutors, Stefanik said: “I certainly think the inspector general is going to look into this, whether there was any overreach by the Department of Justice.”

Stefanik did not address whether she would like to see former Attorneys General William Barr and Jeff Sessions testify about the phone records seizure, a threat made by Senate Majority Leader Chuck Schumer that was promptly criticized as a “witch hunt” by Senate Minority Leader Mitch McConnell.

“But make no mistake, there have been illegal leaks from members of Congress,” Stefanik said. “That's a national security risk. That is a federal crime. It's very serious. And we want to make sure that the Department of Justice is able to pursue any type of criminal illegal leaks.”

The House Judiciary Committee will launch an investigation into the secret subpoenas.

“Congress must make it extraordinarily difficult, if not impossible, for the Department to spy on the Congress or the news media," New York Democratic Rep. Jerrold Nadler, chairman of the committee, said in a statement on Monday. "We should make it hard for prosecutors to hide behind secret gag orders for years at a time. We cannot rely on the department alone to make these changes.”

Stefanik calls for Cuomo to be arrested

House Republican Conference Chairwoman Elise Stefanik (N.Y.) called for New York Gov. Andrew Cuomo (D) to be arrested after an investigation found the governor had harassed multiple women. In a statement, Stefanik also said President Biden should call for the governor’s resignation. “No one is above the law and today...

Former President Trump won't immediately try to stop several former Justice Department officials from testifying before Congress but is willing to put up a fight over executive privilege if legislators try to secure further interviews with his former aides and officials, a letter from lawyer Doug Collins reads. Collins said...

U.S. House Speaker Nancy Pelosi is again calling on the Biden White House to extend a ban on evictions for people who have been unable to pay rent during the coronavirus pandemic, after the COVID-19 moratorium lapsed over the weekend. "We all agree that the eviction crisis is an enormous...

The latest drip in his cascade of defamation lawsuits, Rep. Devin Nunes (R-Calif.) sued MSNBC over a Rachel Maddow segment accusing him of “unexplained interactions” with a Ukrainian Parliament member suspected to be a Russian agent. Two days after the intelligence community released a report exposing continuing Russian government efforts...

Will Trump ever be held accountable? The Justice Department just increased the odds.

Laurence H. Tribe is Carl M. Loeb University Professor emeritus and a professor of constitutional law emeritus at Harvard Law School. Donald Trump managed to evade legal accountability throughout his presidency. That might be about to change — and the newest sign comes in a brief filed by the Justice Department. It doesn’t directly address the former president, yet has ominous implications for his ability to avoid responsibility for his role in the Jan. 6 insurrection.

I am incredibly disappointed to see the Watertown Daily Times amplify Rep. Elise Stefanik’s false claim with a front page headline blaming Speaker of the House Nancy Pelosi for the Jan. 6 insurrection (“Stefanik blames Pelosi for Capitol riot,” July 28). While the article itself was somewhat evenly balanced, the...

Devin Nunes has more cash on hand than any other Republican. What does he want to do next?

WASHINGTON — Rep. Devin Nunes has more campaign cash on hand than any House Republican as he prepares for a 2022 reelection race that he’s favored to win. The campaign committee for Nunes, R-Calif., who became a national political figure after aligning himself with former President Donald Trump, had more than $11.5 million on hand as of June 30.

Tom Kean, Jr. has now picked up the endorsements of the top three Republican leaders in the U.S. House of Representatives as he seeks a rematch with Rep. Tom Malinowski (D-Ringoes) in New Jersey’s 7th district. House GOP Conference Chair Elise Stefanik today backed Kean for the Republican nomination, joining...

Stefanik must consider the other side

This is an opener letter to U.S. Rep. Elise Stefanik. Wow, only in your new leadership position for a short time and your priorities are shaping up. Instead of supporting and advocating a bipartisanship congressional investigation of the seditious insurrection of the US Capital on Jan. 6; you and your fellow leaders think it is a better use of resources to investigate the claims of a TV personalities’ unproven claims of an NSA investigation. That seems logical, I think not.

In the years before passage of the Child Victims Act in New York state, Bridie Farrell was a common sight in the halls of the state capitol in Albany. Farrell was a member of the U.S. National Speed Skating between 1998 and 2014, with three American records under her belt — in spite of being abused for years by her much older coach.

Trump objects to release of tax returns to Congress

An attorney for former President Donald Trump objected to the release of his client's tax returns to Congress.

The California Republican's lawsuit accuses Maddow of defaming him with her on-air suggestions he’d conspired with a Russian agent to rig the 2016 presidential election for Donald Trump.

Devin Nunes Gets Out His Libelslander Lawsuit Dartboard, Lands On NBC

Well, to be fair, he never left. Rep. Devin Nunes and his razzledazzle libelslander lawyer Steven Biss have been filing whackadoodle complaints for years, apparently undaunted by their complete lack of success. And yesterday he added to his collection with a spiffy new defamation suit against NBC over a March 18, 2021 broadcast in which Rachel Maddow allegedly accused Nunes of accepting a package from Ukrainian politician Andriy Derkach — who was later sanctioned by the US government for trying to influence the election by falsely smearing Joe Biden — and failing to turn it over to the FBI.

Three U.S. agencies have extended federal foreclosure-related eviction moratoria in an effort to protect renters after the House failed to pass legislation that would extend the ban. Driving the news: House Democratic leaders did not secure enough votes to pass the legislation on Friday, adjourning the chamber for a six-week...