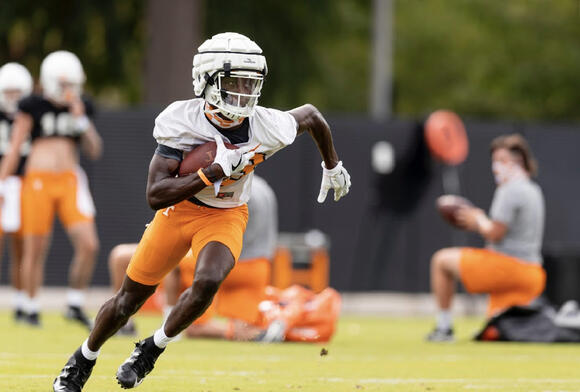 Malachi Wideman was widely viewed as one of the biggest recruiting win's of Jeremy Pruitt's tenure. Tennessee went into the Sunshine State and poached one of the most highly sought-after two-sport stars in the country. Wideman, at the time, was being recruited to play football and basketball at the Power Five level.

After arriving at Tennessee, like most freshmen on the roster, Wideman was impacted by the setbacks of COVID-19. However, after the coaching change in Knoxville, many believed Wideman would be a potential breakout star in Josh Heupel's attacking-style system. For the majority of the spring, Wideman was a limited participant due to injury, but now, according to multiple sources, he is no longer with the team after not returning from the short break Tennessee had following the conclusion of spring practice. A program official confirmed that Wideman is no longer with the team at this time on Tuesday morning.

Wideman played in six games in 2020 as a reserve and only caught one pass during his true freshman season. Coming out of Venice High School (Fla.) Wideman was rated as the 117th overall player in the country in football, and he was rated as the 146th best player in basketball.

Tennessee has removed him from the 2021 roster currently, so it remains unclear if he will return to the team at this time or not, but the Vols are fully entrenched in off-season work at this time.

At this time, Wideman is not currently in the transfer portal, nor has he made any public statement regarding his future in sports.

Former Pittsburgh Steelers wide receiver Martavis Bryant has been suspended from the Canadian Football League, the Toronto Argonauts announced. Bryant, 29, signed with the Argonauts on Jan. 25. Head coach Ryan Dinwiddie said over the weekend that the suspension is passport related as the Canadian-USA border continues to open after the COVID-19 pandemic.

What does Mike Leach think of the internet rumor that Craig James killed 5 hookers at SMU?

Trey Elling chatted with Mike Leach, aka ‘the Bill Murray of college football’, in a conversation that aired both on Shirts & Skins and Trey’s Books on Pod podcast. Questions include:. Does Mike like Zoom calls? (01:42) Is he ever asked about his ‘fat girlfriends’ quote? (02:47) How does Gardner...

Re-ranking the SEC now that Oklahoma and Texas have joined

With the Oklahoma Sooners and Texas Longhorns on the way to the SEC, where would the Big 12 power schools fit in the rankings for this year?. Oklahoma and Texas moving to the SEC is a gamechanger for college football at large. For the SEC, it means adding two powerful...

Bobby Roundtree, the former Illinois standout defensive end who was paralyzed from the waist down in a swimming accident two years ago, died Friday, the university announced. The school did not disclose a cause of death. Roundtree died in Tampa, where he had rehabbing from the spinal cord injury. “All...

Mike Leach on the Air Raid, the Tennessee coup and more

Mike Leach's first SEC Media Days appearance didn't disappoint. Mississippi State's second-year head coach took the podium and told reporters to get straight to questions. He discussed his offense, the transfer portal, and his past interest in the Tennessee job on the main stage. Bulldog linebacker Aaron Brule and receiver Austin Williams then spoke after their head coach.

Big Ten college football fans likely were hoping the northern-based conference would have been the one to get the call from Oklahoma and Texas rather than the SEC. And, honestly, given the level of competition in the SEC — with Alabama, LSU, Florida and Georgia consistently fielding elite teams — perhaps it would have been the better move. But one Big 12 school is reaching out to the Big Ten, looking to potentially depart the South-Midwest conference.

In the summer of 1990, Frank Broyles was pondering a move that would send shockwaves through the college football world. The former Arkansas athletic director was tired of dwindling attendance at conference rivals’ games and being the only school in the former Southwestern Conference outside of the state of Texas, which the Razorbacks had been since 1925.

HOOVER, Ala. — Following an eventful showing from Ole Miss coach Lane Kiffin on Tuesday, Alabama coach Nick Saban took to the podium Wednesday at SEC Media Days and touched on his relationship with his former offensive coordinator. Saban said that after watching Kiffin help change Alabama's offense from 2014-16,...

The Ol' Ball Coach was inducted into the South Carolina Football Hall of Fame on Thursday. Before coaching the Gamecocks Steve Spurrier was head coach of the Florida Gators, winning a national title in 1996 over Bobby Bowden and Florida State.

HOOVER, Ala. — There’s something different about when Nick Saban shows up in Hoover. It’s not just that he’s got a swarm of people around him everywhere he goes. It’s an aura that surrounds him. It’s evident when he speaks. There’s a reason that he’s the greatest coach of all-time, and even in his 19th SEC Media Days, Saban’s presence still feels unlike any other.

From Lane Kiffin to the Oklahoma Sooners: SEC Media Days winners and losers from Day 2

HOOVER, Ala. — SEC Media Days featured the first full day with four coaches on the stage on Tuesday. And it didn't disappoint. Here are three winners and losers from Day 2, which included Georgia, Tennessee, Kentucky and Ole Miss players and coaches. Winners. Ole Miss coach Lane Kiffin. Are...

Vols LB commit sees Tennessee 'starting to get back on track'

The reported move of Oklahoma and Texas to the SEC is leading to a lot of speculation about the rest of the Big 12 Conference. What will happen to the league’s remaining schools if the Sooners and the Longhorns do bolt for the SEC? Will the league choose to remain in tact, perhaps adding other schools? Or will it dismantle, with everyone on their own, hoping to find a new landing spot?

After having a historic five players selected in the first 10 rounds of the 2021 MLB Draft on Monday, Tennessee baseball followed suit on Tuesday as two more players, one commitment and one signee were selected in the final 10 rounds. Overall, this year marks the fifth time in program...

A butter sandwich is more interesting than Bryan Harsin, and probably healthier, too. Could be wrong about this, and hopefully I am wrong about this, but it’s probably not the greatest sign of things to come from Auburn’s new football coach that the most memorable thing he said on Thursday at his first SEC Media Days was that vaccines are a personal choice, and he’s not encouraging anyone to get one.

Tate Martell‘s college football career has certainly been a journey. The former Ohio State and Miami quarterback (and briefly, wide receiver) has found his third school since the start of his college career in 2017: UNLV. For Martell, this is a something of a homecoming. He grew up in the...

Stephen A. Smith Has Blunt Message For U.S. Basketball Team

Stephen A. Smith is among those who have taken to social media to react to the United States men’s basketball team’s shocking loss on Sunday. Team USA, led by Spurs head coach Gregg Popovich, suffered a loss in its opening game of the Summer Olympics on Sunday morning. The Americans were upset by France, 83-76, in the opening contest of the group stage.