McCarthy pushes back on Biden criticism of GOP at NATO 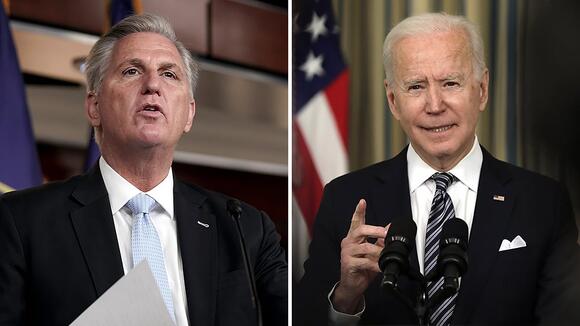 House Minority Leader Kevin McCarthy (R-Calif.) on Tuesday pushed back on President Biden ’s criticism of the Republican Party, claiming that the GOP has “never been more united.”

Biden, at a NATO press conference in Brussels on Monday, was asked how he has been able to reassure allies that the U.S. will be a reliable and stable partner in the future, especially given the violent Jan. 6 attack on the Capitol and former President Trump ’s strong grip on the GOP.

He responded by offering his analysis on the current state of the Republican Party, claiming that it has “vastly diminished in numbers.”

“The leadership of the Republican Party is fractured. And the Trump wing of the party is the bulk of the party. But it makes up a significant minority of the American people,” Biden continued.

“I think it is a shock and surprise that what’s happened in terms of the consequence of President Trump’s phony populism has happened. And it is disappointing that so many of my Republican colleagues in the Senate, who I know know better, have been reluctant to take on, for example, an investigation because they’re worried about being primaried,” he added, referring to a majority of Senate Republicans’ refusal to support a bill that would have created a commission to investigate the events of Jan. 6.

When asked about Biden’s critique of the party during a “Fox & Friends” appearance on Tuesday, McCarthy rejected the president's assessment, then pivoted to an attack on the Democratic Party, saying “I believe what he’s saying is backwards.”

“We're a dying party that has the closest majority in more than 100 years. It's a 50/50 Senate. I'm not quite sure what Mr. Biden is expecting. He's got a party back here in the Democrats fighting among themselves, where [Rep. Ilhan] Omar [D-Minn.] is antisemitic and anti-American and his own Speaker of the House will not rebuke that,” McCarthy responded.

“So I believe what he's saying is backwards. The Republicans have never been more united," he continued. "And remember what he said at the inaugural; he was going to be the president for everyone. That meant Republicans, too. So ... I'm rather shocked by his comments."

McCarthy’s comments come just over one month after the caucus voted to oust Rep. Liz Cheney (R-Wyo.) from her role as House Republican Conference chair largely because of her refusal to accept Trump's false claims of election fraud.

She was later replaced by Rep. Elise Stefanik (R-N.Y.), who has branded herself as a staunch supporter of Trump.

CNN host Jake Tapper confronted Pennsylvania Senator Pat Toomey about the Republican Party's resistance to the House committee investigating the deadly January 6 Capitol riot. On State of the Union Sunday, Tapper asked the Republican senator on why there are not many in the GOP who want to treat the matter as a priority.

Brian Stelter says Donald Trump’s continued promotion of the Big Lie makes sense “when viewed through the prism of narcissism.” He also points out that political reporters are becoming more explicit about describing Trump’s “delusions.”

'What you're doing is unprecedented': McCarthy-Pelosi feud boils over

(CNN) — The relationship between House Speaker Nancy Pelosi and Minority Leader Kevin McCarthy was never very warm. Now it's in the down-right gutter. After a whiplash week of power plays between the two party leaders over the January 6 select committee, tensions are at an all-time high between the California lawmakers, and there are zero signs of that simmering down anytime soon -- with both lambasting each other publicly and erupting at each other privately.

A new poll showed former President Donald Trump's son, Donald Trump Jr., is significantly more popular among Republicans than the GOP heads in both chambers of Congress. Trump Jr. has remained a vocal force within the Republican Party after his father left office and has been floated as a potential presidential or senatorial candidate. He hasn't committed to making a run for office but has been an active member on the campaign trail working to get Republicans elected and it's possible his endorsement could be an asset to candidates, as his father's is.

House Minority Leader Kevin McCarthy referred to Wyoming Rep. Liz Cheney and Illinois Rep. Adam Kinzinger as "Pelosi Republicans" when Daily Mail reporter Emily Goodin asked if they would be punished for serving on the January 6 Capitol Riot committee, to which he replied, "We'll see." The encounter took place...

Ted Cruz has hit out at Nancy Pelosi and branded the January 6 commission a "sham" in a scathing Twitter attack. The firebrand Republican Senator called out the Democrat House Speaker as she prepares a panel to examine the cause of the riot at the U.S. Capitol and how to avoid repeat scenes.

Distinguished pol of the week: Someone finally put their foot down

There were many outstanding figures worthy of recognition this past week. Anthony Fauci, director of the National Institute of Allergy and Infectious Diseases, told Sen. Rand Paul during a hearing on Tuesday that the Kentucky Republican didn’t know what he was talking about when he accused the National Institutes of Health of funding research that resulted in the coronavirus pandemic. “And I want to say that officially,” Fauci declared to the amusement of many tired of the persistent Paul’s unfounded accusations and belly-aching about lifesaving pandemic restrictions.

After House Speaker Nancy Pelosi (D-Calif.) rejected two of the House GOP's indefensible selections for the Jan. 6 investigatory committee, House Minority Leader Kevin McCarthy (R-Calif.) issued a furious statement in response. Republican lawmakers, he wrote, "will not be party to [Pelosi's] sham process." Even at the time, it was...

Democrats are bracing for a slog as they try to craft a sweeping $3.5 trillion spending plan that is the key to President Biden 's legislative agenda. Though much of the public focus has been on separate bipartisan talks on a $1.2 trillion deal — which one senator characterized as the “easiest part” of the two-track strategy because of its narrow focus — big headaches await Democrats on their go-it-alone strategy for their larger bill that faces intense GOP opposition.

Pelosi to blame for Capitol security 'breakdown' on Jan. 6, wants to 'stick to her narrative': Rep. Banks

House Speaker Nancy Pelosi, D-Calif., is responsible for the "breakdown" in security at the Capitol during a deadly riot on Jan. 6, and only wants to "stick to her narrative" as she appoints anti-Trump Republicans to the committee investigating the attack, Rep. Jim Banks said Sunday. Banks, R-Ind., made his...

Will Pence primary Trump — and win?

Not too long ago, The New York Times floated the idea of a Donald Trump -Ron DeSantis presidential primary. Aside from the lame attempt to sow division among Republicans, it was an absurd suggestion. DeSantis does not have the profile or national experience to challenge Trump. Plus, he must burn over a year running for reelection.

When Congress reconvened following the Jan. 6 riot at the Capitol, Democratic Speaker Nancy Pelosi and Republican House Administration Committee ranking member Rodney Davis met in the chamber and agreed that Congress should call for a bipartisan investigation into the unprecedented events of that day.

CNN’s Jake Tapper presses Sen. Pat Toomey (R-PA) on why he thinks there are so few Republicans who seem to want to get to the bottom of what happened at the January 6 Capitol riot.

Rep. Adam Kinzinger (R-Ill.) said after accepting Speaker Nancy Pelosi 's (D-Calif.) appointment to the Jan. 6 select committee on Sunday that "lies and conspiracies" have threatened "our self-governance." "For months we have searched for answers and what process we should use to get them. For months, lies and conspiracy...