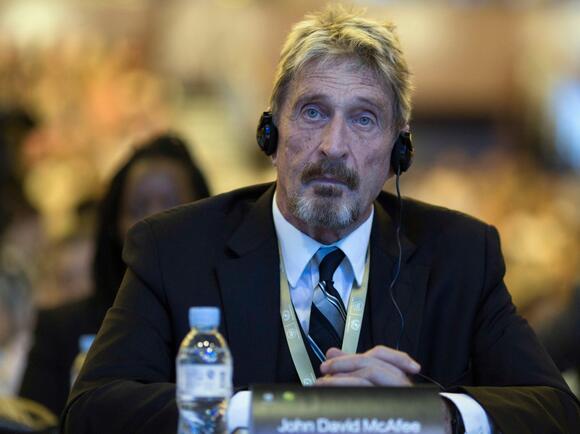 John McAfee, the founder of the antivirus software McAfee, testified in Spain on Tuesday to fight his extradition to the United States on tax-related criminal charges, the Associated Press reported.

The 75-year-old argued that if extradited to the US, he would spend the rest of his life behind bars, according to the report.

His charges carry a sentence of up to 30 years in prison, the AP reported.

Prosecutors in Tennessee say McAfee failed to disclose earnings made from cryptocurrency , speaking fees, and income he made from selling the rights to his life story for a documentary, according to the report.

During the virtual hearing at the Spanish National Court on Tuesday, McAfee also claimed the charges against him were politically motivated. A judge is expected to rule on whether he is to be extradited to the US in the next few days, according to the AP.

McAfee was arrested in October 2020 at an airport in Barcelona, the AP reported. The outspoken exec has continued to praise cryptocurrency and rail against his jailers using posts shared to his Twitter account.

There's been a lot of theories surrounding the death of John McAfee who authorities said died of an apparent suicide. McAfee was found dead in his prison cell in Spain where he was waiting to be extradited to the United States on tax charges. However, there's still a lot of questions remaining about his death. His wife, Janice McAfee, previously revealed that she had doubts about his death. She explained that John showed no suicidal tendencies before pointing to the U.S. government as the true culprit.

AN author has claimed that the late John McAfee was BROKE when he died in prison after blowing his $100 million fortune on "bizarre" mansions. Mark Eglinton, who collaborated with the tech pioneer on a book for six months while he was on the run, believed McAfee was penniless at the time of his passing – citing evidence from a series of exclusive interviews.

'Bill Gates of Britain' Mike Lynch CAN be extradited to face criminal charges in US over claims he cooked the books at software firm he sold for £8bn, judge rules

The founder of British software giant Autonomy can be extradited to face criminal charges in America, a judge ruled yesterday. Billionaire Mike Lynch, once dubbed Britain's Bill Gates, is accused of cooking the books at his former firm before it was sold to US firm Hewlett-Packard for £8billion in 2011.

JOHN McAfee's wife has slammed suggestions her late husband was suicidal over money woes and says the "truth" will come out. Janice McAfee's comments come after an author claimed John was broke when he died in prison after blowing his $100 million fortune on "bizarre" mansions. Mark Eglinton, who collaborated...

John McAfee Was Broke When He Died: Biographer

NASHVILLE – A federal indictment unsealed today charged Chieu K. Tran, 54, of Nashville, the owner of Signature Nails Spa, (Signature) with tax evasion and obstruction of justice charges, announced Acting U.S. Attorney Mary Jane Stewart for the Middle District of Tennessee. Tran was arrested by IRS Criminal Investigation Agents at his home this morning and will appear before a U.S. Magistrate Judge later today.

PITTSBURGH, PA – A resident of Hermitage, PA, has been sentenced in federal court to 18 months of incarceration followed by 18 months of supervised release on his conviction of tax evasion, Acting United States Attorney Stephen R. Kaufman announced today. The Court also imposed a fine of $10,000.00 and ordered restitution to the IRS in the amount of $510,235.08.

The late tech tycoon and crypto advocate John McAfee died broke while awaiting extradition to the US on tax evasion charges in a Spanish prison last June, according to Scottish author Mark Eglinton. McAffee had spent his fortune on lavish mansions, says the writer who collaborated with the controversial antivirus pioneer on a book.

Minnesota AG Keith Ellison asked the judge to remove language suggesting girls who witnessed Floyd's murder were responsible for their own safety.

A U.S. District Court Judge this week couldn’t resist an attempted mic drop in response to a class action lawsuit related to Maxwell House brand coffee labeling. In an order granting final approval of a $16 million settlement in a class action case initiated last October, U.S. Southern District of Florida Judge Rodolfo A. Ruiz II declared the settlement agreement “good to the last drop” — a reference to the Maxwell House brand tagline that dates back to at least 2015.

President Biden's latest executive order promoting competition in the U.S. economy could make it easier for Americans to quit their jobs. Mr. Biden is proposing the Federal Trade Commission curtail the use of noncompete agreements, which are contracts that often restrict lower-paid employees from taking another job within their industry. CBS MoneyWatch reporter Irina Ivanova joined CBSN's Elaine Quijano to discuss.

Her Brother Died. The Government Says She’s ‘No Longer Welcome’ to Ask Questions

Andrew Gnazdowsky was “pretty much the coolest guy in the entire world,” according to his sister Nicole. Which is why, when he died in October 2020, Nicole was hit particularly hard. Hearing that her brother, an engineer, had died while on a job site was tough enough. But when she turned to officials for answers, she was labelled “inappropriate” and “disrespectful.” Now, the government says she’s “no longer welcome” to contact staff, and it will not respond to any further calls.

Why are Biden, Dr. Fauci and the CDC publicly blaming and shaming “unvaccinated Americans” for this new wave of Covid? That’s a great big lie. It’s time to think. Our own government is trying to demonize one group of Americans. Why?. This lie is so over-the-top, Pinocchio would object. Bernie...

Biden is NOT ruling out fourth stimulus check – as $2,500 bonus money debunked

JOE Biden has not ruled out sending Americans a fourth stimulus check after bogus claims about a $2,500 payment emerged on social media. The slew of posts on Facebook claiming that the United States government will provide another round of stimulus relief at the end of July were all part of an elaborate hoax.

Nathan Baggaley, who won two silver medals at the 2004 Athens Olympics, was arrested in 2018 alongside his brother, Dru.

Former NSA whistleblower Edward Snowden warns: “The greatest danger to national security has become the companies that claim to protect it”

About two weeks ago, former NSA whistleblower Edward Snowden revealed a new terrifying leak that he said is going to be “the story of the year.” Snowden sounded the alarm bell about the military-grade Pegasus spyware developed by an Israeli cybersecurity startup NSO Group. As we first warned in 2018,...

After attempting to smuggle millions of dollars in cash, a ‘Kim Kardashian lookalike’ was arrested and sentenced to prison.

‘Kim Kardashian Lookalike’ Jailed After Trying to Smuggle Millions In Cash. A British woman was sentenced to prison after being found trying to smuggle millions of pounds out of the country in luggage. Tara Hanlon, 30, was stopped from boarding an aircraft from London to Dubai in October of last...