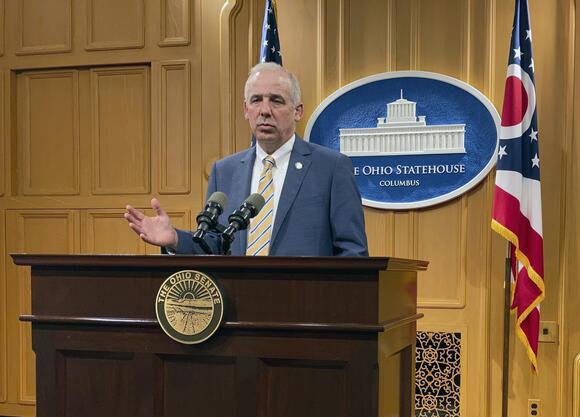 COLUMBUS, Ohio (AP) — Ohioans receiving food stamps would have to undergo a new “asset test” that measures total worth, including the value of cars owned by anyone in a household, under a provision in the Senate’s version of the state’s upcoming two-year budget.

The goal of the test is to be sure needy recipients of food stamps, or SNAP benefits as they’re now known, get what they deserve, said Senate President Matt Huffman, a Republican from Lima.

“There are a lot of folks who can afford to pay for a variety of things who are still receiving these benefits,” Huffman said earlier this month.

The measure incorporates elements of stand-alone legislation introduced earlier this year in the GOP-controlled Senate. Dozens of people representing food banks, legal aid groups and health care advocacy groups have testified against it. The legislation is pending in the Senate Government Oversight and Reform Committee.

Opponents of that bill and its reappearance in the budget say it comes at the worst possible time, as emergency federal benefits enacted during the coronavirus pandemic expire. Those include maximum allotments for food stamp recipients, the $300 weekly unemployment payment, and a moratorium on evictions.

“It will force low-income Ohioans to choose between having food and owning a car to get to work, or saving money to prepare for an emergency,” she said.

Under current law, income is the only test for receiving food stamps. Ohioans making 130% of the poverty level, or about $2,350 a month for a family of three, are eligible.

The Senate measure would still allow ownership of vehicles used for work, to transport a physically disabled family member, or to carry heating fuel or water for home use, under federal guidelines, said Senate GOP spokesperson John Fortney.

The asset test was not included in the House version of the state’s two-year, $75 billion budget, which House lawmakers approved in April. A bipartisan conference committee ironing out differences between the Senate and House version of the budget was scheduled to begin work Tuesday afternoon.

The story has been updated to correct that Kelsey Bergfeld is director of Columbus-based Advocates for Ohio’s Future.

Feds to release $120M in COVID-19 funds for Vermont towns

MONTPELIER, Vt. (AP) — The U.S. Treasury Department cleared the way Friday for Vermont towns to receive an additional $120 million in COVID-19 relief funds. The Vermont congressional delegation said the funding had been held back because of a technicality related to local governing bodies. In Vermont, the usual unit of local government is municipalities whereas counties are in much of the country.

ST. PAUL, Minn. (AP) — State Rep. John Thompson agreed Friday to publicly apologize for calling a colleague a racist during a heated debate on the Minnesota House floor last month. The embattled St. Paul Democrat agreed to apologize to Republican Rep. Eric Lucero, of Dayton, on the floor the...

OLYMPIA, Wash. (AP) — A federal freeze on most evictions enacted last year is scheduled to expire Saturday, after the Biden administration extended the original date by a month. The moratorium, put in place by the U.S. Centers for Disease Control and Prevention in September, was the only tool keeping millions of tenants in their homes. Many of them lost jobs during the coronavirus pandemic and had fallen months behind on their rent.

Georgia GOP starts push for takeover of local election board

ATLANTA (AP) — Republican lawmakers in Georgia have started a process that could lead to a takeover of elections in the state’s most populous county. Many in the GOP continue to claim wrongdoing in reliably Democratic Fulton County had stolen the 2020 election from Donald Trump, even though an independent monitor found no evidence of fraud or impropriety.

Michigan: 350K who got unemployment aid won’t have to repay

LANSING, Mich. (AP) — About 350,000 Michigan residents who received federal unemployment aid will not have to repay benefits after the state had informed them that some reasons for eligibility it approved at the start of the pandemic were not OK. The Unemployment Insurance Agency said Friday it will give...

Polis: Unvaccinated state workers must get 2 tests a week

DENVER (AP) — Gov. Jared Polis has announced that state employees who are not vaccinated against COVID-19 will have to be tested twice a week for the coronavirus and continue to wear masks indoors in public spaces. The Colorado Sun reports Polis made the announcement Friday, citing the rise of...

LAS VEGAS (AP) — U.S. Rep. Mark Amodei of Nevada had three surgeries and an outpatient procedure over the past 10 months for cancerous tumors on his kidneys and a cancerous spot in his esophagus, the Republican congressman disclosed Friday. Amodei told The Associated Press that he he did not...

To get shots in arms, governments turn to money in pockets

Millions of people in the U.S. who haven’t gotten the COVID-19 vaccine could soon have a new reason to roll up their sleeves: money in their pockets. President Joe Biden is calling on states and local governments to join those that are already handing out dollars for shots. New York, the nation’s biggest city, started doling out $100 awards on Friday.

WASHINGTON (AP) — The Senate advanced a roughly $1 trillion infrastructure plan on Friday with a bipartisan group of senators helping it clear one more hurdle and bracing to see if support can hold during the next few days of debate and efforts to amend it. Senate Majority Leader Chuck...

ALBUQUERQUE, N.M. (AP) — A broad coalition of Indigenous leaders in New Mexico called for the resignation Friday of the director of a legislative agency on public education, arguing undisclosed comments made by the top official were disparaging toward Native Americans. At a rally and news conference convened by the...

Berkeley, Mo. (AP) — Civil rights advocates, religious leaders and others on Friday said they were outraged by St. Louis County Health Director Faisal Khan’s claims that he was assaulted and bombarded with racial slurs after defending a new mask mandate. But a county councilman questioned whether Khan was telling the truth.

OKLAHOMA CITY (AP) — The Oklahoma Republican Party faced fierce criticism on Friday for a Facebook post likening COVID-19 vaccine mandates to the persecution of Jewish people in Nazi Germany. The post on the party’s official Facebook page urged people to call the lieutenant governor and ask him to call...

AP FACT CHECK: No, Pelosi is not out to arrest mask refusers

WASHINGTON (AP) — A member of the House Republican leadership is spreading a false accusation that House Speaker Nancy Pelosi wants people arrested if they refuse to wear a mask inside the premises. Pelosi does not direct law enforcement in the House, and Capitol Police officials, who do, aren’t threatening...

INDIANAPOLIS (AP) — Indiana’s top health officials made pleas Friday for people to get vaccinated and continue wearing masks as an especially contagious coronavirus variant spreads throughout the state, but they said they had no plans to reinstate statewide health mandates. In recent weeks, the number of new COVID-19 cases...

WASHINGTON (AP) — Defense Secretary Lloyd Austin is vowing he “won’t let grass grow under our feet” as the department begins to implement the new vaccine and testing directives. But Pentagon officials on Friday were scrambling to figure out how to enact and enforce the changes across the vast military population and determine which National Guard and Reserve troops would be affected by the orders.

MINNEAPOLIS (AP) — The job of recovering money for the victims of Minnesota businessman Tom Petters’ Ponzi scheme has come to an end, as a federal judge has closed the receivership, which recovered $722 million. Petters, of Wayzata, is serving a 50-year prison sentence for defrauding investors out of $1.9...