Troopers: Motorcyclist airlifted from scene of serious crash in Steuben 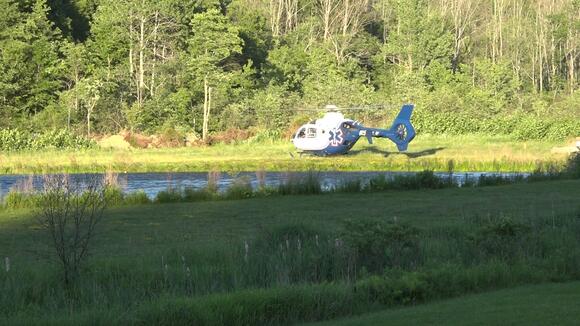 State police are investigating a motorcycle accident that happened in the town of Caton near Corning on Monday.

Around 7:15 p.m. troopers were dispatched to the scene of a motorcycle crash at the intersection on Thurber Road.

According to police, no other vehicles were involved. However, the operator of the motorcycle was airlifted to Guthrie Hospital.

Troopers say the person is in serious condition at this time. The crash remains under investigation.

The Wayne County Sheriff’s Office reported a two-car crash that happened on State Route 21 at the intersection with North Creek Road in Palmyra. It happened Wednesday, a little before 2 p.m., according to deputies. Emanuel Hernandez, 33, of East Rochester was turning left onto North Creek Road from State...

The Seneca County Sheriff’s Office says a 14-year-old was airlifted after a shotgun malfunctioned and its barrel exploded. On Tuesday around 11:35 a.m. investigators responded to the area of Nielsen Road and Route 96A in Fayette for the report of a teen who had sustained a gunshot wound to the arm.

Police say a Penn Yan man was speeding when he lost control of his vehicle while rounding a curve in the town of Benton, resulting in a crash. Joshua Riley, 33, was traveling west on Ferguson Corners Road near Lovejoy Road when his car went off the road. It traveled...

Two people were hurt after a car crossed into their lane of travel and struck them- causing their vehicle to rollover in Yates County. Schuyler Smith, 17, of Naples was traveling north on State Route 245 in Middlesex when he went into oncoming traffic and a vehicle occupied by John Hobart and Helen Hobart.

Firefighters say 22 male tenants were able to escape a fire at a boarding home in Bath safely. First responders from a number of nearby agencies were called to a structure fire on E. Morris Street. The road was closed off for several hours as crews worked the scene. The...

A Sunday morning motorcycle crash ended fatally around 1 a.m. in Cortland. Casey Stockton, 26 of Harford, was driving a motorcycle when involved in a police pursuit with Cortland Police Department. The area was closed off after the crash. Want the latest headlines in your inbox each morning? Click here...

A motor vehicle accident involving a Corvette on Monday afternoon resulted in the death of a 71-year-old man. The passenger of the Corvette, Gregory Damon, died when the 2017 Corvette driven by a 75-year-old veered off the road into a tree. The accident happened on Richmond Road East around 2:45...

Police have identified the man who drowned after jumping into the Erie Canal to save his dog Tuesday. Michael Singer, 36, was recovered by first responders around 9:45 a.m. He was fishing with his son, and their dog, by the stairs that led to an area in front of Lock 30.

A man allegedly robbed a convenience store in Elmira and is now in police custody. Elmira Police responded to a call at the 7-Eleven store on Main Street in Elmira on Thursday around 12:50 a.m. The call was to report a robbery. The suspect had fled the scene before officers...

The Ontario County Sheriff’s Office reports the arrest of two people following a burglary investigation. Adam Donnelly, 19, of Victor and Tyler Westerberg, 18, of Waterloo are accused of breaking a window to an office building at Old Castle, entering the building, and stealing property. The burglary alarm was activated...

Missing man in Livingston County has been located unharmed

Deputies arrested a Spencerport man in Wayne County on an array of charges after a domestic incident on July 17. It happened in the town of Walworth, according to deputies, who say that Jason Courtney, 31, was charged with assault, strangulation, endangering the welfare of a child, and grand larceny. He was also charged with unauthorized use of a motor vehicle.

Deputies report the arrest of a Phelps teen following an investigation by the Ontario County Sheriff’s Office. Troy Strickland, 19, of Phelps was charged with criminal mischief while in custody at the Ontario County Jail. He’s accused of damaging his cell mattress- causing $94.90 in damage. He was left at...

Hornell residents are expressing frustration over Norfolk Southern trains that now sit idle at the railroad crossing between East Avenue and Henry Street, obstructing traffic for a few hours at a time to an entire day. Unsuspecting motorists find themselves trapped and locals end up directing traffic away from the...

Man drowns trying to save dog in Erie Canal

Police in Macedon report a man died attempting to save his dog after it jumped into the Erie Canal. A man was with his dog and 4-year-old son when the dog jumped into the canal by Lock 30 after 8a. The man jumped in after it and yelled for help...

Deputies: Lyons man failed to appear after being found passed out in car

Deputies report the arrest of a Lyons man on a warrant for failing to appear in local court. The failure to appear charge is related to a previous incident, where Cody Williamson, 29, of Lyons was charged with criminal possession of cannabis. He was observed, unconscious sitting in the passenger’s...

A woman who was being sentenced for previous charges escaped police custody in court. Kristin Oakes, 31 of Penn Yan, ran away from the officers in court during her sentencing and a warrant was issued for her arrest. When police arrived to her home they saw her in the residence...

Police continue to investigate the fatal shooting that happened on the 200 block of Taughannock Boulevard on July 20. Now, they are asking for the public to help them with it. The victim was identified as 32-year-old Alan Godfrey, who was likely targeted, according to police. The homicide occurred in...

A hearing was held in connection with John Gray III’s case in Seneca County Court, and whether statements he made in connection to an alleged murder can be used. Gray is being charged with first-degree murder after police found his wife, Ashia Chilson-Gray, murdered in her home last November. One...