The 38-year-old television personality said Monday on Instagram Stories that Waddell, 35, is at home and recovering after spending nine hours at the hospital.

Bass shared a photo of Waddell in a bed at the hospital. He referenced his health scare on Bachelor in Paradise Season 3 in the caption.

"Carly's first ambulance ride - she's gonna be ok and, my goodness, this brings back some memories," Bass wrote. 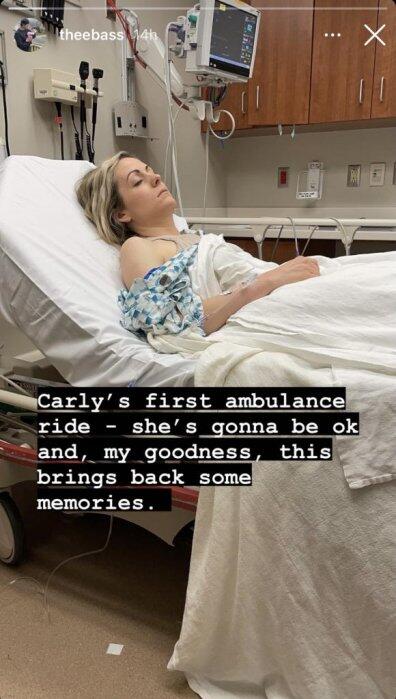 "Thanks for all the prayers and support. After 9 hours we left the hospital but she's still in pretty rough shape and may have to go back. Continued thoughts and prayers are so appreciated. And she knows she's beloved," Bass wrote.

"I know y'all wanna know what's going on but it's her health and story to tell if she wants to share. (I did get her permission to share photo from earlier so you can relax Jan from Wisconsin)," he said. "In all the madness, she lost her phone and she really needs to rest so it might be a bit."

Bass and Waddell met and started dating during Bachelor in Paradise Season 3, which aired in 2016. The pair married in June 2017 and have two children, daughter Bella, 3, and son Charlie, 19 months.

Bass and Waddell announced their split in December after more than three years of marriage.

"We will always cherish our time together and continue to have the utmost respect for one another as we focus on what's best for the future of our family," the pair said.

Raven Gates and Adam Gottschalk are expecting a baby in January 2022.

Bachelorette’s Blake Moynes’ Net Worth Is Surprising: Inside His Job as a Wildlife Manager

Bachelorette contestant Blake Moynes has a hefty net worth thanks to his job as a wildlife manager in Canada. However, appearing on two seasons of the reality dating show has most likely helped to boost his bank account. The 29-year-old has an estimated net worth of around $200,000 to $500,000,...

Julianne Hough to Be Named Next Bachelorette?!

If you're a fan of the Bachelor franchise, we probably don't need to tell you that there have been quite a few major shakeups in recent months. Chris Harrison was fired; two Bachelorettes filmed their seasons back-to-back, and it's looking more and more as though Tayshia Adams is poised to become the new face of the franchise.

Jennifer Love Hewitt took to her Instagram stories to candidly open up about how she's been dealing with her pregnancy. The 42-year-old is currently pregnant with her third child with husband Brian Hallisay. You'd think each time would be easier than the last, but that's clearly not the case. WATCH:...

Kaitlynn Carter has a cutie on the way! The Hills: New Beginnings star has been sharing her baby bump progress since her June announcement. The reality star, 32, showed her stomach’s shadow in the Instagram reveal. Her boyfriend Kristopher Brock‘s silhouette could also be seen in the sweet shot. Later...

As seen throughout previous seasons things slip. Things get said on social media or pics and videos leak out. Bachelor Nation is pretty die-hard when it comes to spoilers and figuring out who wins. Since the entire season has been filmed in one location, spoilers for Reality Steve have been harder to come by. So, fans dig and they dig deep. Now, a comment has been shared on a TikTok about Blake Moynes that has many wondering if it’s a hint or a slip. Warning!!! Huge Spoilers Ahead.

So, What Exactly Does Blake From 'The Bachelorette' Do for a Living?

Well, well, well: Blake Moynes is back on The Bachelorette! We became very well-acquainted with Blake back on Season 16, the season that featured both Clare Crawley and Tayshia Adams. Now, he's trying to win over Katie Thurston. Blake made his first appearance this season on Episode 4. He and Katie had actually spoke on social media, and Blake made it very clear that he's serious about her.

Wait a minute! We thought we still had a couple more episodes to go until hometown dates kick off. As Katie Thurston continues her search for love on The Bachelorette, a new preview may just prove she's more than ready to take the next step with one special contestant. In...

BACHELORETTE fans said they’re “furious” and “devastated” after Katie Thurston sent home “sweet” Connor Brennan. The shock elimination took place during Monday’s episode. The 30-year-old made the decision to send home Connor after she admitted to feeling like they were stuck in the “friend zone.”. Following their one on one...

A new episode of Chrisley Confessions dropped yesterday featuring Todd, Chase, and Julie Chrisley. The family spent some time talking about Chase and his sobriety. Turns out, Chase Chrisley is eight months sober. Eight months from what? Well, Chase clarified this applies to ALL controlled substances. But, he mostly had an issue with marijuana and alcohol.

TEEN Mom star Catelynn Baltierra is pregnant with TWINS. She shared the news one year after she suffered a miscarriage with husband Tyler. The 29-year-old took to Twitter on Wednesday to share the exciting news. Alongside a photo of the sonogram, Catelynn wrote: “Our secret is finally out- it’s TWINS!”

The perfect getaway! Christina Haack rang in her birthday with her boyfriend, Joshua Hall, on a romantic escape shortly after taking their relationship public. “Thank you to my man for kicking off my 38th with a whimsical dream vacation ❤️. 🔒 🗝,” the Christina on the Coast star captioned an Instagram slideshow on Sunday, July 11, sharing her favorite moments from the trip with her followers. Comments were disabled on the post.

After being sent home on Monday’s latest episode of The Bachelorette, four of Katie Thurston’s guys are getting a second chance at love in Bachelor in Paradise Season 7!. Aaron Clancy, Tre Cooper, Connor Brennan, and James Bonsall will be joining the upcoming season, which premieres on Monday, August 16 on ABC.

On Wednesday, the 90 Day Fiancé star, 55, snapped a glamorous selfie from her night out in Las Vegas to celebrate fellow reality star Nick Hogan's 31st birthday. The photo, which was shared to her Instagram, showed Deem clad in a white jumpsuit with her blonde hair slicked back to a high ponytail. She accessorized her look with gold chains and pink hoop earrings.

ABC's Bachelor franchise has seen a lot of new developments in recent months. Following a public controversy and substantial payout, Chris Harrison was replaced by Tayshia Adams and Kaitlyn Bristowe on The Bachelorette, and rotating celebrity hosts will be brought in for the next Bachelor in Paradise. Now, in the midst of all the changes, one of the most notorious Bachelor Nation alums, Colton Underwood, is getting blunt about his relationship with the franchise.

‘Bachelor In Paradise’ Spoiler: One Couple Spotted Together Post Filming

This time will be different... we hope! Former Bachelorette couple Clare Crawley and Dale Moss are betrothed — again. “They’re engaged but still are working on building a solid relationship. They’ve discussed future plans but aren’t necessarily wedding planning,” an insider told Us Weekly of the pair. “They aren’t rushing to tie the knot.”