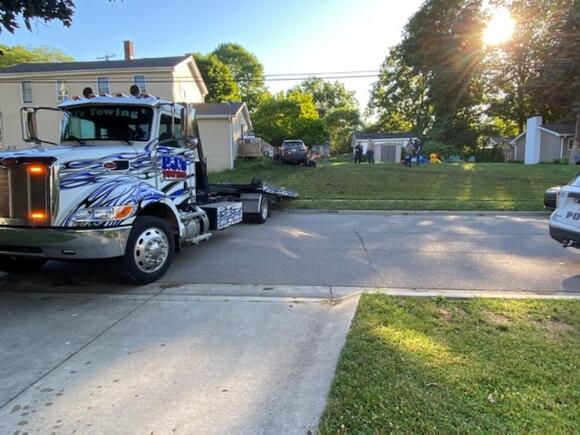 Five suspects are in custody following a police chase and manhunt in Grand Ledge Tuesday morning.

Several law enforcement agencies responded to a call of a vehicle traveling over 100 mph on M-100 around 6:30 a.m. Tuesday. A police chase ensued, the car crashed into the front porch of a home.

One suspect was captured at the scene. The other fled on foot.

Eaton County Deputies along with Michigan State Police arrested the male who fled from Grand Ledge after a traffic stop on Interstate 96.

"My daughter came in waking me up to tell me a car hit our house," he wrote. "I thought she was pranking me. I ran outside, not knowing anything. I went to ask if the people were okay. That’s when the MSP rolled up and guns drawn screaming at me to get back inside. We are OK but very shaken up."

Ava Barber shares her experience of the car hitting her home

Ava Barber also lives at duplex where the car crashed. She said she was getting ready for school when she heard sirens, and then she felt the house shake.

“I was kind of nervous because when all the cops got their guns out and were yelling at us to go inside, I was kind of scared if there was a really dangerous man in the car that was going to come inside and maybe take one of us hostage. You know you never know.”

Multiple agencies including Michigan State Police, Ionia County Sheriff, Grand Ledge Police, and Eaton County Sheriff were on scene at the corner of Greenwood and Front St after the initial crash occurred.

Police K-9s and authorities from the US Drug Enforcement Administration were also on hand.

Through a law enforcement investigation and witness statements, a second suspect vehicle was identified with four additional occupants.

This vehicle was found and stopped on I-96 near Lansing Road.

All five individuals were taken into custody without incident.

Stay in touch with us anytime, anywhere.

Charges have been filed against a man accused of shooting a woman who was going door-to-door handing out information as a volunteer for Right to Life of West Michigan.
IONIA COUNTY, MI・13 HOURS AGO
WSYM FOX 47

A woman was shot and killed early Friday morning in a parking lot near the Oak Park YMCA. Lansing Police Department officers were dispatched around 1:40 a.m. to the 900 block of Long Boulevard.
LANSING, MI・19 HOURS AGO
WSYM FOX 47

The new crisis assessment team could help people dealing with mental health issues. One mother said that if her son would’ve had resources like the crisis team, her son may still be alive.
LANSING, MI・6 HOURS AGO
WSYM FOX 47

Williamston man arrested in connection to suspicious death in May 2021

EAST LANSING, Mich. — A Williamston man was arrested Monday after a warrant was issued by the Ingham County Prosecutor's Office for the crime of torture and domestic violence. According to a news release from the Williamston Police Department, this arrest is in connection to an ongoing investigation into...
WILLIAMSTON, MI・4 DAYS AGO

Lane changes could be coming to Lake Lansing Road

An elementary school in Ovid went into a hard lockdown Tuesday morning, but all students and staff are okay.
OVID, MI・8 DAYS AGO
WSYM FOX 47

Ingham County Animal Control and Shelter is offering a voucher program aimed at giving pet owners a low-cost way to have their fur babies spayed or neutered.
INGHAM COUNTY, MI・11 HOURS AGO

The Holmes Street School in Lansing was built 100 years ago. It's been vacant for almost two decades, but it will soon become a home to dozens.
LANSING, MI・19 HOURS AGO
WSYM FOX 47

Former superintendent of Grand Ledge Public Schools, Brian Metcalf, has been awarded close to $880,000 after he was fired in 2020 surrounding a social media controversy.
GRAND LEDGE, MI・3 DAYS AGO
WSYM FOX 47

Hillsdale County’s Courthouse has been under renovation for several years. The price tag is now approaching more than $5 million.
HILLSDALE COUNTY, MI・3 DAYS AGO
WSYM FOX 47

Jackson’s City Council has voted to change directions on a plan to rehab five targeted homes in the city. It’s a program that was meant to give low-income residents a chance at affordable housing.
JACKSON, MI・2 DAYS AGO

East Lansing is having their first Vintage Festival this Saturday, and the East Lansing City Council passed a policy providing funding to private businesses who want to hold events on public streets.
EAST LANSING, MI・1 DAY AGO
WSYM FOX 47

The East Lansing Police Department has hired an independent, nonprofit research organization to examine its policing practices, and they want to hear feedback from the community.
EAST LANSING, MI・9 DAYS AGO
WSYM FOX 47

Food, fair rides and fun, the Hillsdale County Fair is back

The Hillsdale County Fair is back this week for its 172nd year. Organizers say this year’s event has something for everyone.
HILLSDALE COUNTY, MI・4 DAYS AGO
WSYM FOX 47

The city of Charlotte is looking to fill a very important role. The search is on for a new fire chief because the current chief has resigned.
CHARLOTTE, MI・7 DAYS AGO
WSYM FOX 47

Several elected officials and students rallied in Lansing today about issues impacting them. They say they want to see some changes and plan to make their wishes known at the ballot box.
LANSING, MI・6 HOURS AGO
WSYM FOX 47