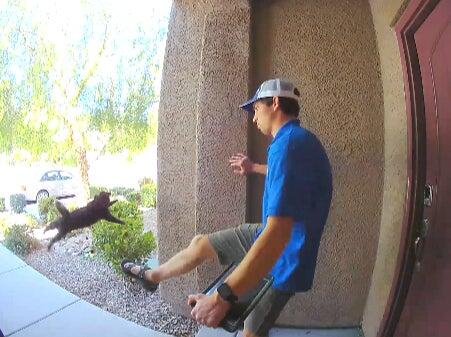 The incident was captured on a Ring doorbell camera outside a home in Las Vegas last month.

In the clip, the young worker can be seen approaching the doorstep of the house as the black cat follows happily at his side.

The man then looks around, apparently to check if anyone is watching, before booting the animal – sending it soaring into the air.

The recording was initially posted on Ring’s Neighbors app, which allows users to share activity in their area.

The man who uploaded the video, Aaron Aguilar, said it was his wife’s cat, and that the “dude who kicked [it]” was a representative of Williams Pest Control, a company based in Nevada.

He claimed that he had contacted the firm and had been trying for “three weeks to right this wrong with no progress.”

Twitter user @bookofjonah shared the video on Twitter after a friend who lives in the neighbourhood sent it to him.

Here’s how viewers responded to the now-viral encounter:

The backlash also prompted scores of people to post the footage on the company’s Yelp page, with captions including: “Animal abuser,” and “proud employee of Williams Pest Control torturing neighbourhood pets for fun.”

In an interview with local broadcaster 13 Action News, Aguilar said he had posted the clip to spur the company into action.

Royce Williams, the company’s president, said he was horrified by the worker’s behaviour.

“His actions should not in any way reflect the values or the standards of Williams Pest Control,” he told 13 Action News.

Williams said that the perpetrator was an unpaid sales trainee, not an employee, and that he had gone off on his own to try to solicit clients without his knowledge.

When the boss learned of the animal abuse, he terminated the man’s contract.

Williams insisted that he had been in regular contact with Aguilar and had complied with almost all of his requests.

“We’ve done every single thing he’s asked us to do except when asked for our employees and their names and information, we didn’t give it to him and we stopped that conversation,” he said.

Williams added that he’d never received so many negative phone calls as in the wake of the video’s release.

He stressed that he loves animals of all kinds and was glad to see the cat wasn’t seriously hurt.

“I want to make sure that it is understood that there’s never, ever a time that abuse is accepted,” he said.

JACKSONVILLE (CBSMiami/AP) — A man who climbed over a barrier was injured after he got too close to a jaguar at the Jacksonville Zoo and Gardens. The attack occurred Wednesday at the Range of the Jaguar exhibit. The man was hospitalized with non-life-threatening injuries, zoo officials said. The man climbed...

A security guard has been jailed for more than five years for stabbing 16 cats in a series of night-time attacks. Steven Bouquet killed nine cats around Brighton between October 2018 and June 2019. Seven more were injured. The 54-year-old had denied 16 counts of criminal damage and possession of...

Police officers in Las Vegas are investigating an incident at Circus Circus hotel-casino. Authorities responded to reports that a person was waving a gun around.

Michigan woman shot her neighbor’s cat with a crossbow, the cat returned with the bolt still in his neck after days

After seeing his cat missing for a few days, Eric had the shock of his life when he finally found his cat on his doorstep. The injured cat was lying on the ground with a crossbow running through his neck. It was on July 15 when he found his cat,...

A Freehold man died Friday after his co-workers found him at the bottom of a swimming pool on their employer’s property in Monmouth County, authorities said. Guilebaldo Ramos, 30, was found about 6:43 p.m. in the pool at a home on Conover Road in Millstone, according to New Jersey State Police Sgt. Philip Curry.

A man was killed and several people were injured by a huge swarm of bees after a 100-pound hive was disturbed, authorities say

A man died and at least six people were injured after a swarm of bees stung people "hundreds of times," Tucson's Northwest Fire District said.

As many of us in Maine already know, you can never be sure just what you'll find around any corner--or in this case, along any stretch of road. But sometimes, you just get lucky; you're in the right place, at the right time, with your wits about you enough to catch it all on camera.

Boy stabs 12-year-old ‘friend’ over 70 times, tries to behead him & cut off his hand

A jury is currently deliberating a 15-year-old’s sentencing after he was convicted of killing his friend and trying to decapitate them. On December 12, Roberts Buncis, of Boston, Lincolnshire, England, was found deceased in a wooded area near his home. The 12-year-old had been stabbed over 70 times and showed markings on his neck consistent with someone trying to behead him.

400-Pound Grizzly Bear Pulls Woman From Her Tent, Kills Her

A California woman was killed in her sleep by a grizzly bear while camping in Montana. Leah Davis Lokan, 65, was sleeping in her tent when the 400-pound bear attacked her. Campers in another tent heard the commotion and used bear spray to scare the animal away. Officials said the...

Police have released CCTV footage showing two men who detectives want to speak to after a young woman was allegedly raped inside a toilet block. It is not suggested the men shown have committed any offence, only that police believe they can assist with inquiries. The alleged sexual assault occurred...

Providers were shocked to see such a young girl come into the hospital with a baby on the way. Authorities say Juan Miranda-Jara, 24, walked into Hillcrest Hospital in Tulsa, OK on July 14th with the young pregnant girl. The doctors called the police and told them they had a potential rape on their hands. Miranda-Jara was then arrested and charged with first-degee rape of a minor. However, the man’s relationship to the girl remains unknown.

Teen who jumped to death from Vessel was laughing with sister before leap, guard says

The 14-year-old boy who leaped to his death in front of his horrified family at the Vessel in Hudson Yards was laughing and running with his sister right before, according to a worker who witnessed the tragedy. “There were lots of tourists around. The kid was racing up the stairs...

‘Friends’ call girl to go outside and play together, hours later she returns home covered in blood and bruises, being beaten continuously for hours

Brittany, the mother of the 10-year-old Callie, was happy to let her daughter play with her friends after they knocked on the front door of her apartment to ask if she could come next door to play with them. The mother regretted her decision a few hours later when the little girl came back home covered in blood all over her face and bruises.

Body of boy, 3, found in lake holding hands with sister, 9, who died trying to save him

The bodies of a three-year-old boy and his older sister, who were holding hands, have been pulled from the bottom of a lake. The two children tragically drowned with three members of their family at Derinoz Dam near the city of Amasya in Turkey. The boy, who was celebrating his...

Angela Deem has undergone a dramatic transformation over the course of the past year. Not in terms of her behavior -- which remains so bad that many fans want Angela fired from 90 Day Fiance. But her appearance, from how she styles her hair and dresses to her physical figure,...

A Chinese man nearly died after allegedly inserting a wiggling 8-inch eel into his backside to treat his constipation. The live fish bit through the man's colon before getting stuck in his abdomen, doctors said. The unnamed patient claimed he decided to use the creature to solve his bowel problems...

A brown bear attacked a group of campers, eating one and forcing the others to flee barefoot into the mountains

The bear snuck up on hikers and devoured their friend in Ergaki national park in south-central Russia in the second fatal attack in a month.