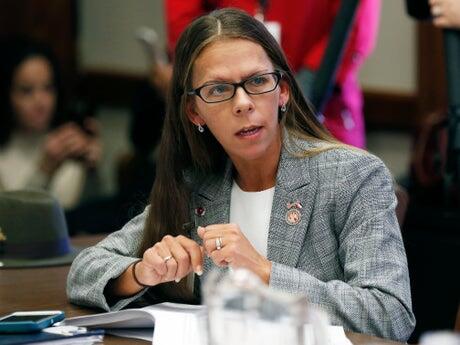 A former Mississippi lawmaker’s body was discovered in the same spot where her sister-in-law was found dead last year, days after the politician vowed to seek justice in the case of her relative.

Ashley Henley, 40, a former Republican , was found dead from a gunshot wound on Sunday night in Yalobusha County, the North Mississippi Herald reported.

Assistant District Attorney Steven Jubera said in a statement that the gunshot was “non-accidental” and they are investigating the case as a homicide .

Henley appeared to have been mowing grass in her lawn near the trailer where the burned body of her sister-in-law, Kristina Michelle Jones, was found on 26 December.

Her sister-in-law died in a trailer fire, according to reports. But police said they are looking at the case “with fresh eyes.”

“We are going back to square one (in Jones’s case) after receiving an initial Fire Marshal’s report and lab reports,” Mr Jubera was quoted as saying by Mississippi Today.

The attorney added that the “family has gone through a lot in the last six month” and they would thoroughly investigate the matter.

Henley is survived by her husband Brandon Henley, and a son.

“Yes it was my wife Ashley Henley that was found murdered in the same place my sister was. She was running a weed eater and was shot in the back of the head according to local authorities,” Henley’s husband wrote on Facebook. “That’s all they have told us at the moment,” he said.

Henley recently expressed her frustrations about her sister-in-law’s case on social media and said she will continue to push for justice in the case.

Representative Dan Eubanks of DeSoto County said he was heartbroken with her death and organised a GoFundMe account to assist her family financially as they have “suffered several financial difficulties over the last few years.”

“What an absolute loss to our state, county, me personally, and most importantly her dear family,” he said on Facebook. “Please pray for her husband and son and their extended family….and that God’s justice will be served on those responsible.”

House Speaker Philip Gunn’s office also released a statement: “We are all shocked and saddened by this news. Our thoughts and prayers are with Ashley’s family and friends.”

Henley, a former teacher, served a four-year term from 2016-2020 in the state House of Representatives but lost her re-election bid in 2019 by 14 votes.

Mystery as missing mum, 26, is found murdered inside a Nazi bunker four days after she vanished

A MISSING mum has been found murdered in a Nazi bunker in a forest in eastern Germany. Bianca S., 26, is feared to have been abducted and stabbed after she was last seen cycling away from a train station in Oranienburg last Thursday. A friend who saw her at noon...

AURORA, Colo. (CBS4) – A woman was found lying in the grass, bleeding from a gunshot wound, late in the morning of June 28 in Aurora. She was identified by the Aurora Sentinel as 30-year-old Seteria Nicole Black. Investigators eventually landed on Eric Huff as the man they believed responsible for Black’s death. Eric Huff (credit: Colorado Department of Corrections) Huff, however, was found July 9 when Denver Police Department officers answered a shooting call in the 700 block of South Alton Way. He was dead. A spokesperson with the Denver PD said there is, at this time, nothing criminal in nature regarding Huff’s...

A Texas firefighter was found dead at a hotel in Cancún. His family believes he was kidnapped and murdered.

Mom Offered Baptisms Before Her Kids Were Found Dead in a Canal. She’s Now Charged With Murder.

A Florida mom who offered to baptize neighbors soon before her two young daughters were found floating dead in a canal in Broward County three weeks ago was arrested Tuesday and now faces murder charges. Tinessa Hogan, 36—who’s been charged with two counts of first-degree murder—was reportedly reciting Bible passages...

Girl, 17, ‘beaten to death and hung from bridge for wearing jeans’ dreamed of becoming police officer

A TEENAGE girl allegedly beaten to death by members of her family before being hung from a bridge because she wore jeans had ambitions to join the police force. Neha Paswan, 17, reportedly became embroiled in a row with her grandparents after she donned denim during a religious ritual in India, and was later found hanging from a bridge.

The National Police Association on Wednesday slammed Congress’ investigation of the Jan. 6 Capitol riot as a politically motivated "dog and pony show" that has no intention of uncovering the truth of what really happened that day. In an interview with Fox News on Wednesday, association spokeswoman Betsy Brantner Smith,...

Teenager, 16, 'carried disabled girl to a park before stabbing her 50 to 60 times', court hears

A 16-year-old schoolboy carried a disabled girl to a park before stabbing her up to 60 times, a court has heard. The teenage girl, also 16, was found in a field off Highsted Road in Sittingbourne, Kent, just after 8am last Thursday before paramedics rushed her to a London hospital where she remains.

36-year-old Sheena West and 30-year-old Kelsey Paton both loved animals, to refurbish furniture and were both loved by many in the Hampton Roads community. They were both found dead in the same apartment months apart.

Girl, 5, is rescued by neighbors after yelling for help and banging on the windows after being 'kidnapped by monster' who lived across from her apartment where cops found her father dead

A five-year-old girl was rescued from her kidnapper, whom she called 'a monster,' after several days in captivity inside his Detroit apartment when a neighbor saw the child banging on a window and calling for help. The abduction of Maggie Millsap in late June took an even more sinister turn...

A 16-year-old boy has been charged with the murder of a 13-year-old fellow student, whose body was found in the bathroom of a school in Singapore. Police rushed to River Valley High School on Monday afternoon after receiving reports of a boy found dead. The officers found a 13-year-old student lying motionless in the bathroom with multiple wounds. The boy was pronounced dead at the scene and an ax, found beside the body, was seized as evidence, BBC reported.

Phone records of a woman who allegedly stabbed to death a retired nurse suggest her mobile had been near where the body was found, the trial has heard. Shifnal grandmother Judith Fox, known as Judy, disappeared from her home in Haughton Drive in June last year. The trial of her...

A HUSBAND who was imprisoned for beating his wife to death in front of their children was found dead in his prison cell this week. The Utah family was aboard an Alaskan cruise in 2017 when the husband beat the wife to death. He was sentenced to over 30 years in prison.

Hikers discovered a pair of red Nike shoes and a human foot in a Maryland national park in June. Now the FBI has identified the woman who died. The foot was found in a remote part of the woods, away from established paths of Catoctin Mountain Park, according to McClatchy News. Rangers found the rest of the woman’s body, except for a missing hand and foot, fewer than 100 yards away.

LAUDERHILL, Fla. - A 36-year-old South Florida woman has been arrested, weeks after the bodies of her two young daughters were found floating in a canal. Tinessa Hogan, 36, was arrested Tuesday night on two counts of first-degree murder, news outlets reported. The bodies of Destiny Hogan, 9, and Daysha...

Officers said they got a call from the mansion, now known as the Villa Casa Casuarina, a luxury boutique hotel. Housekeepers told police they discovered two bodies inside one of the hotel rooms. Cops and fire rescue responded to the scene and indeed reportedly found two deceased men around 1...

A former California mayor has been sentenced to six years in prison for molesting an 11-year-old girl. On Tuesday, David Cook, 55, was found guilty of molesting the victim, who was referred to as "Jane Doe," over the course of two months. Judge Robert LaForge in Sonoma County Superior Court decided to hand Cook the sentence based on impact statements from the victim, her stepmother, and father, as well as Cook's wife and legal team.

A mother of biracial twins who look very different from each other has said that she often needs to explain to strangers that they are related. Jade Ball, 32, from Salford, Greater Manchester, said strangers can’t believe that her biracial twins are related because one twin has blue eyes and blonde hair, while the other has brown hair, brown eyes and dark skin.