Group pushes to get Honor and Remember flag flown at capitols 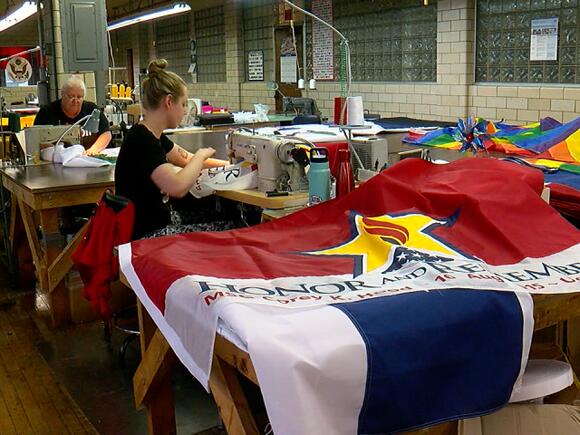 There’s an active push in Ohio and an ongoing effort in Kentucky to mandate the flying of a new flag at each state’s respective capitol building. It’s a practice already put into place in Indiana.

“We want the Honor and Remember flag flown by everyone,” said Tom Mitchell, Ohio HONOR and REMEMBER State Chapter Director.

The non-profit organization has been lobbying to get the Honor and Remember flag adopted in 26 states. The Ohio House voted May 19, 2021, to adopt it and fly it on Memorial Day at the state capitol building. The bill now awaits a call to the Senate floor.

“We've been after this for ten years,” Mitchell said.

The flag is meant to honor those who served and sacrificed their life in the name of serving their country. It’s a sacrifice Kentucky resident and retired Marine Corps Gunnery Sergeant Samuel Deeds knows all too well, having lost several of his fellow Marines from the 3rd Battalion, 8th Marines.

“There's 25 guys that we lost between 2005 and 2006 that I know every single one of them personally,” Deeds said. “Two of them from Northern Kentucky. One I put in the Marine Corps. Another one, I helped get into shape so he could join the Marine Corps. I'm not a Gold Star family member. But I have lost 27 brothers to combat. I've lost numerous others since then to suicide."

In 2019 and 2020, Deeds helped lobby at the Kentucky statehouse to get the Honor and Remember flag adopted in the state. He was the guest of Kentucky Republican Representative Ed Massey.

“The first two years that we pushed this, I went to committee, testified in the committee for it, and it passed unanimously through the committee. Then we go to the House to the floor unanimous through the House. And then it gets held up in the Senate, for whatever reason,” explained Deeds.

He said Representative Massey has a plan to pre-file the bill for January 2022 and Deeds says he’ll be right there on the front line pushing for it once again.

Meanwhile, he’s watching across the river to see what they do in Ohio.

“I'm going to be pushing as hard as I can, push to get it through Kentucky and do whatever I can do from this side of the river for Ohio,” Deeds said.

The National Flag Company in Cincinnati makes the majority of the flags and company president Artie Schaller III said it’s an honor to be part of helping to honor those who died in the line of duty.

“It just hits you on a daily basis of the sacrifice that is going on, and we're glad we can be a tiny part of giving back,” he said.

The Honor and Remember flag is a very personal memorial for families who request and receive them.

The flags given to families have their loved one's name, date of death and service sewn onto them in red lettering.

“Families will actually trace their loved ones' names with their fingers, because this is a moving monument,” Mitchell said.

You can find out more information on the Honor and Remember flag by going to honorandremember.org .

If you have a veteran story to tell in your community, email homefront@wcpo.com. You also can join the Homefront Facebook group, follow Craig McKee on Facebook and find more Homefront stories here.

CHEYENNE, Wyo. (KIFI) – Governor Mark Gordon has ordered both the U.S. and Wyoming State Flags be flown at half-staff statewide from sunrise to sunset on Wednesday, July 21, 2021 in honor and memory of First Lieutenant Alva “Ray” Krogman. A Worland native, Krogman's plane was shot down during the...

South Dakota Governor Kristi Noem has ordered that flags be flown at half-staff at the State Capitol in Pierre from sunrise until sunset tomorrow (July 30, 2021) in honor of former State Senator Wendell Hanson. Wendell served as state senator from 1977 to 1978 and from 1981 to 1982. Funeral...

Army Maj. Gen. Maurice Rose To Be Honored With Statue At State Capitol

There is a campaign to build a statue honoring Maj. Gen. Maurice Rose at the state Capitol. He had a courageous career in the Army.

Opal Lee, the "Godmother of Juneteenth" honored with portrait in State Capitol

Opal Lee has long been an activist for the recognition of Juneteenth as a national holiday. In fact, the Fort Worth woman is known as the "Godmother of Juneteenth." For years, Lee would march two and a half miles in order to further her cause and last month, her dreams were made true when Juneteenth was finally recognized as a federal holiday.

(COLUMBUS, Ohio)—In honor of the life and service of Ohio State Highway Patrol Sergeant Jared M. Ulinski who died today, Governor DeWine has ordered that the flags of the United States and the State of Ohio be flown at half-staff upon all public buildings and grounds throughout Hancock County, as well as at the Ohio Statehouse, Vern Riffe Center, and Rhodes State Office Tower in Columbus. This order is effective today and will remain until sunset on the day of his funeral. Sergeant Ulinski joined the Patrol in 1999 and served at the Findlay Post.

Police departments across Ohio have received a recommendation from the Ohio Attorney General to implement a program created in Cincinnati to aid police response to a scene where a veteran is in crisis. The Military Liaison Group was the idea of Cincinnati Police Sergeant Dave Corlett.

A woman waving a Trump 2024 flag drove her car onto Minnesota state Capitol grounds Monday in the middle of a news conference being held by an embattled Democratic state lawmaker. Authorities said that the woman, whom they identified as Tammi Jeka, drove her vehicle on the sidewalk during state...

Flags fly in honor of veterans in Monroe County

MONROE COUNTY, Ohio — It's hard to miss the flags stationed off State Route 145 in Beallsville. Each one – 133 in all -- honors a fallen Monroe County veteran who died from World War II to present day. They’re proudly displayed along the hillside on the Field of Honor...

Ohio trooper dies on duty; flags to be lowered statewide

The Ohio State Highway Patrol has announced the death of a sergeant while he was on duty.

In a world where life is cheap, America never gives up on the lost. At a time when deadly flooding in Europe, a surge in coronavirus cases among the unvaccinated and the latest political finger-pointing dominated the news, most people didn’t hear about Airman 2nd Class Edward J. Miller’s trek home last weekend.

SERGEANT BLUFF, Iowa (KCAU) – The Medal of Honor Flag is on the move again. At the Sergeant Bluff Legion Post, veterans gathered to dedicate signs to the Iowa segment of the Medal of Honor Highway and send off the flag as it passes onto Illinois. “Just think of their...

Former Montgomery County Police Chief Tom Manger took the helm of the United States Capitol Police Friday. He heads up a force in which two officers died and nearly 150 officers were injured following the Jan. 6 attack on the U.S. Capitol. “I am humbled and honored to join the...

Flags To Fly At Half-Staff to Honor Fallen U.S. Navyman

IA, (KICD) — Iowa Governor Kim Reynolds has ordered all flags in Iowa to fly at half-staff from sunrise to sunset today. (July 31st, 2021.) The flags will fly at half-staff to honor fallen U.S. Navy Hospital Apprentice 1st Class John M. Mulick, who was killed at Pearl Harbor during World War II. He is returning to his hometown of Elma, Iowa, after nearly 80 years.

(7-28-21) The flag pictured above was donated by the Rockford American Legion Post 508 in honor of the Rockford Bicentennial and is a replica of the USA flag of 1820 when Rockford was established. Ohio was the 17th state entered into the United States on March 1, 1803. In 1820...

These 11 States Are Seeing the Worst COVID Surges Right Now

This year's Independence Day holiday weekend showed signs of a big return to normalcy for Americans after more than a year of life under the COVID-19 pandemic. Record numbers of travelers were expected to take to the skies, roads, and rails to attend celebrations and gatherings as the daily national average of COVID-related deaths dropped 23 percent over the past two weeks to less than 300, The New York Times reports. But even as new infections continue to plateau around 12,000 a day, some states are seeing COVID surges hit their populations, according to data from The Washington Post.

CLEVELAND, Ohio (WJW) – The FOX 8 I TEAM is getting to the bottom of yet another fight over a thin blue line flag meant to honor police officers. This one hangs along I-90 on the west side as you enter Cleveland. The flag was put up to honor David Fahey, a Cleveland Police officer killed in the line of duty in 2017.

OCEANSIDE, Calif. (CBS13/AP) — The families of eight Marines and one sailor who died when their amphibious assault vehicle sank off the Southern California coast last summer plan to sue the manufacturer of the vehicle that resembles an armored seafaring tank, their lawyers announced Thursday. BAE Systems knew for a...

A group of parents in Mississippi are asking Gov. Tate Reeves to ban mask mandates after a superintendent in the state overrode the school district's board, which had voted to make mask wearing optional. Former Trump-era Environmental Protection Agency chief of staff Mandy Gunasekara and other parents are organizing to...