By Emily Brooks
Posted by
WashingtonExaminer
2021-06-14 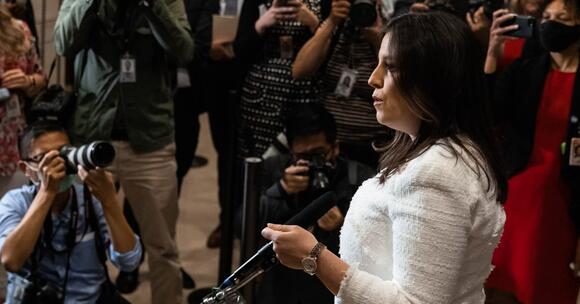 "Elise Stefanik is a threat to ‘spaghetti dinner towns,” Putorti said in an announcement video including a mashup of news coverage accusing Stefanik from pivoting from a centrist Republican to a Trump loyalist. “If we continue to divide people, they’re not going to be able to share that meal together."

Putorti, a lawyer, also addressed his sexual orientation in his announcement.

“I do think that being gay gives a different perspective in leadership that is important so that we can understand each other better,” he said.

Putorti faces steep odds of beating Stefanik in the rural upstate New York district that used to be a battleground but has turned increasingly Republican. In addition to midterm elections historically favoring the party opposite of the sitting president, the district has a Cook Political Report partisan voter index of R+8.

Democratic nominee Tedra Cobb challenged Stefanik in 2018 and 2020, with Stefanik defeating her by 14 and 18 points, respectively. Cobb, who started a PAC dedicated to electing rural Democrats, encouraged her followers to donate to Putorti’s campaign.

Stefanik’s campaign responded to Putori’s entry into the race by saying he only changed his voter registration from New York City to upstate Washington County just two weeks before his announcement.

Alex DeGrasse, a senior adviser to Stefanik, called Putorti a “Far-Left Socialist Democrat candidate” and pledged that “the Stefanik campaign will continue to make sure voters know the choice next November between real results for the North Country versus another Far-Left Socialist who will be a rubber stamp for Nancy Pelosi, Joe Biden, and Andrew Cuomo’s failed policies.”

Stefanik had $2.5 million in campaign donations as of March 31.

One other Democrat so far is seeking the Democratic nomination to challenge Stefanik: Eric Watson, an advocate for Medicare for All and a “Green New Deal.”

Bongino: 'Nothing will happen' to Andrew Cuomo because Democrats are 'a protected class'

New York Gov. Andrew Cuomo is unlikely to face true justice if a criminal proceeding is commenced and he is found guilty of any crimes based on the New York attorney general's report that the governor sexually harassed several women, because Democrats are rarely if ever held responsible for their actions, Dan Bongino said Tuesday on "The Dan Bongino Show."

Pelosi, other Democrats call on Cuomo to resign or be impeached

House Speaker Nancy Pelosi, who like New York Gov Cuomo is also from a political family, also called on Cuomo to resign amid allegations of sexual harassment.Ms Pelosi’s remarks come after the New York attorney general’s office released a report detailing the extent of Mr Cuomo’s sexual misconduct.“As always, I commend the women who came forward to speak their truth,” she said. “Recognizing his love of New York and the respect for the office he holds, I call upon the Governor to resign.”New York Democrats are plotting Gov Andrew Cuomo’s impeachment while New York Republican Rep Elise Stefanik called for...

Stefanik calls for Cuomo to be arrested

House Republican Conference Chairwoman Elise Stefanik (N.Y.) called for New York Gov. Andrew Cuomo (D) to be arrested after an investigation found the governor had harassed multiple women. In a statement, Stefanik also said President Biden should call for the governor’s resignation. “No one is above the law and today...

(NEWS10) – House Speaker Nancy Pelosi is now calling for Governor Andrew Cuomo to resign. This after an investigation into sexual harassment claims against the governor spearheaded by Attorney General Letitia James found evidence of sexual harassment by the governor. “Under Attorney General Letitia James, a comprehensive and independent investigation...

WASHINGTON (AP) — Several House Democrats have called on House Republican Leader Kevin McCarthy to apologize to House Speaker Nancy Pelosi or resign after audio surfaced of him saying at a weekend fundraiser that it would be "hard not to hit her" with a gavel if he's sworn in as speaker after the 2022 midterm elections.

WASHINGTON, D.C. (WWTI) – Representative Elise Stefanik released the below statement on the New York Attorney General’s investigation into New York Governor Andrew Cuomo. Attorney General James’ report found that Cuomo sexually harassed and assaulted multiple women, including state employees. “No one is above the law and today justice must...

New York Governor Andrew Cuomo has a lengthy response to the findings of the New York Attorney General’s Office that includes photos of himself and other prominent politicians hugging and kissing people. The investigation concluded that Cuomo sexually harassed 11 women. In his on-camera statement Tuesday, the governor said, “I...

Confronted with revelations, Cuomo runs out of Democratic friends

It was late morning yesterday when New York Attorney General Letitia James (D) unveiled the findings of a months-long investigation into harassment allegations surrounding Gov. Andrew Cuomo (D). The conclusions were brutal: investigators determined that the governor sexually harassed 11 women, and Cuomo and his team retaliated against a former employee for coming forward.

President Joe Biden called for New York Gov. Andrew Cuomo to step down on Tuesday, in hours after the release of a bombshell report that found Cuomo had sexually harassed several women. “I think he should resign,” Biden told reporters at the White House. “I understand that the state legislature...

And the Biden administration reversed itself on extending a ban on evictions.

Hiltzik: Stefanik, GOP smear everything they don’t like as ‘socialism’

GOP Rep. Elise Stefanik Gets Dragged For Not Understanding Medicare

If you’re going to criticize socialism, it helps to know what socialism is. But that doesn’t seem to be the case for Rep. Elise Stefanik (R-N.Y.), who, despite graduating from Harvard in 2006 with a degree in government, has no clue about socialism. The evidence comes in the form of...