By Charles Hilu
Posted by
WashingtonExaminer
2021-06-14 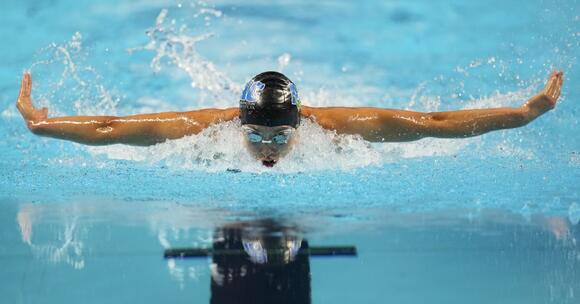 An 18-year-old Arlington Aquatic Club swimmer from Virginia broke an Olympic record in the 100-meter butterfly by less than half a second over the weekend.

Torri Huske surpassed the American Olympic record for the event by two-tenths of a second at the Olympic trials in Omaha, Nebraska, finishing in 55.78 seconds on Sunday night.

“Huske in [lane] 4 is ahead and will touch first. And an American record: 55.78,” play-by-play commentator Mike Tirico said as Huske finished the race.

The previous record of 55.98 seconds belonged to seven-time medalist Dana Vollmer, who set it at the 2012 Summer Olympics in London.

Huske was closely followed by 16-year-old Claire Curzan, who is predicted to make the Olympic team for the event in Tokyo. Curzan finished half a second behind Huske. Each country may send two swimmers per event to the Tokyo Olympics.

In the first major meet of her junior year of high school, Huske, who is preparing to swim competitively at Stanford University in the fall, won four events at Northern Virginia’s 2019 6A Regional Championships, setting new records in three of them. At the 2019 World Junior Swimming Championships, she helped the United States win the gold medal in three team events and won gold medals for herself in two events, along with one silver.

In the months leading up to the trials, Huske faced difficulty finding adequate places to swim, according to the Washington Post. Pandemic-related restrictions and decisions drove most local pools to stay in a 25-yard setup rather than switch to the Olympic standard of 50 yards, so Huske was only able to swim in short-form pools.

Huske and Curzan will compete in the 100-meter butterfly at the final circuit Monday night, with the two top finishers claiming spots in Tokyo.

US swimmer claims race was 'probably not clean' after winning silver

A Team USA swimmer walked back comments he made Friday saying the race in which he had just placed second behind a Russian athlete was "probably not clean."

The Everett Railroad brings back the magic of the steam engine

HOLLIDAYSBURG, Pennsylvania — If you were the president of a railroad 100 years ago, you were kind of a big deal. Yet when Alan Maples became president of the Everett Railroad Company in 1983, a purchase that made him the youngest person in the history of the industry to hold that title, the Alabama native knew full well he would not wield the prominence, power, and influence that title once held.

"Let's do this!" Michelle Carter, a stay-at-home mother in Midlothian, Virginia, told her son Toby at Target.

Former Sen. Carl Levin, a Michigan Democrat, died Thursday at his home at the age of 87.

House Republicans want answers about the “dramatic change” in how a top scientist first talked about the coronavirus, from initially saying some of COVID-19’s features “(potentially) look engineered” to calling it a “crackpot theory” a few days later.

A South Carolina man succumbed to his injuries after he and his wife were struck by lightning while vacationing in Florida.

The Centers for Disease Control and Prevention released a study Friday backing up its stricter new mask guidance, one that concluded that people infected with delta variant may transmit COVID-19 even if they're vaccinated, based on an outbreak at a Cape Cod beach party.

First lady Jill Biden underwent a "successful" procedure to remove a mystery object from her left foot on Thursday, according to her office.

Baltimore schools to require masks for all teachers and students, including those vaccinated

Baltimore County Public Schools will require all students, teachers, staff, and visitors to wear masks during the school year.

The large number of sick and unvetted migrants entering the country has raised fears among Republican governors that the Biden administration's handling of the crisis at the U.S.-Mexico border is propelling COVID-19 outbreaks.

A "special counsel" has been appointed the power to expand a GOP-backed investigation into the 2020 election in Wisconsin.

Pedro Castillo, a populist socialist and former primary school teacher with no prior political experience, was inaugurated as president of Peru on Wednesday.

Subscribe today to the Washington Examiner magazine and get Washington Briefing: politics and policy stories that will keep you up to date with what's going on in Washington. SUBSCRIBE NOW: Just $1.00 an issue!

NO MORE MR. NICE GUY: The days of police pleading and cajoling are coming to an end. In announcing new vaccine rules for federal workers, President Joe Biden said he wants to require all members of the military to roll up their sleeves and get a vaccine to stem the spread of the new delta variant of the coronavirus.

Rhode Island Gov. Daniel McKee and Providence Mayor Jorge Elorza, two Democrats who may face off in a gubernatorial challenge, were separated on Wednesday following a heated exchange.

A trial has been scheduled in connection to a lawsuit filed by a Loudoun County, Virginia, physical education teacher who was suspended after saying he would not address transgender students by their preferred pronouns, using their biological pronouns instead.