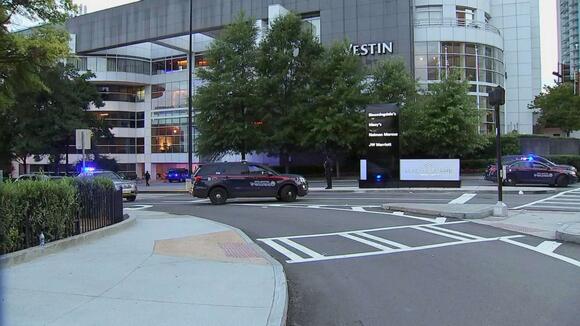 A 15-year-old boy and a 15-year-old girl have been arrested for allegedly shooting a security guard at an Atlanta mall to try to get into the Apple store after hours, authorities said.

The security guard, a man in his early 40s, was in "critical but stable condition" on Monday, Atlanta police Deputy Chief Charles Hampton said at a news conference.

The guard was shot in the torso at the Lenox Square Mall at about 8:30 p.m. Sunday, police said.

The mall had closed at 6 p.m. Police believe the teenagers' "end goal was to try to gain access into the Apple store" after the shooting but were unsuccessful, Hampton said.

After the shooting, the teens "were definitely trying to hide their clothing" and discarded some items as they fled, Hampton said.

MORE: 4 mass shootings in 6 hours leave 38 wounded, 6 dead across US

Witnesses at the mall gave officers a description of the suspects, and within 10 minutes, police said they found the two teenagers outside a nearby Westin.

A gun has been recovered, police said.

The investigation is ongoing, Hampton said, adding that police are looking to identify the driver of a small blue car who may have taken the teens to the mall.

"We are working very closely with the Fulton County District attorney's office as we move forward to the prosecution," Hampton said.

The Lenox Square Mall said in a statement, "We cannot find words strong enough to condemn this violent and unprovoked action against a valued member of our security team who was providing afterhours patrol outside the mall. Our hearts go out to this officer who was brutally attacked, and we are praying for his full recovery."

"We are immensely grateful to the APD for their strong partnership,” Lenox Square added. "Because of our longstanding work together and effective response plans, they were on the scene within minutes, rendering critical aid to our colleague and swiftly capturing the criminals involved."

New video shows a Colorado police officer using his pistol to beat a man he was trying to arrest, choking him and threatening to kill him

Police: Attack on 14-year-old Dutch girl may be LGBTQ-linked

An Indiana man has received a life prison sentence for stalking his estranged wife to Florida, shooting her and burying her body in Tennessee

Inside a KKK murder plot: 'Do you want him six feet under?'

In 2015, three Ku Klux Klan members hatched a plot to murder a Black man who had been recently released from a state prison

Man charged in death of Michigan woman missing since 2005

Inside a KKK murder plot: Grab him up, take him to the river

In 2015, three Ku Klux Klan members hatched a plot to murder a Black man who had been recently released from a state prison

Jury finds South Carolina man guilty of kidnapping, murdering woman who mistook his car for her Uber ride in 2019

Jury finds South Carolina man guilty of kidnapping, murdering woman who mistook his car for her Uber ride in 2019