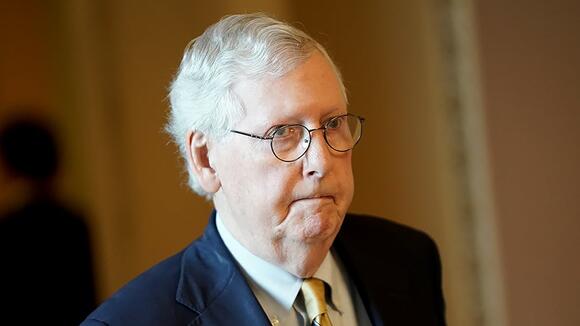 Senate Minority Leader Mitch McConnell (R-Ky.) warned on Monday that he and his allies are willing to step into Republican Senate primaries to try to prevent a candidate they view as unelectable in November 2022 from advancing.

McConnell, during an interview with conservative radio host Hugh Hewitt, was asked if he and the Senate Leadership Fund, an outside group closely aligned with the Kentucky Republican, would be willing to intervene in 2022 Republican primaries.

"If necessary," McConnell told Hewitt about their willingness to get involved in Republican primaries.

"There's no question that in order to win ... you have to appeal to the general election audience," McConnell added. "I'll be keeping an eye on that. Hopefully we won't have to intervene, but if we do, we will."

Republicans are hoping to take back the Senate majority in 2022, where they are defending 20 seats compared to 14 for Democrats. Among those states are four open seats, and two seats in states won in 2020 by President Biden . They are also hoping to unseat Democrats in states like Georgia, Arizona and New Hampshire, states all carried by Biden last year.

McConnell's warning comes as the party watched themselves lose seats they had hoped to flip in the 2010 and 2012 cycles after GOP candidates won the primary only to unravel in the general election.

He previously didn't rule out in February the potential that he would get involved.

But his new remarks come as the party is facing renewed primary headaches heading into 2022; they face crowded fields in states like Missouri, North Carolina and Pennsylvania, where loyalty to former President Trump remains a critical factor.

Trump has also come out hard against some GOP incumbents, including vowing to challenge Sen. Lisa Murkowski (R-Alaska), who hasn't formally announced if she's going to run for reelection. He also previously heavily criticized Sen. John Thune (R-S.D.), McConnell's No. 2.

Jack Pandol, a spokesman for the Senate Leadership Fund, told Axios earlier this month that the group reserved "the right to intervene in cases where a candidate is a clear threat to lose a seat in a general election" and to support GOP incumbents.

A month after President Biden and a group of senators reached a bipartisan agreement on an infrastructure package, Senate Majority Leader Chuck Schumer (D-N.Y.) tried to advance the debate last week. Republicans refused, saying they needed more time to wrap up the details of the deal. GOP senators were surprisingly...

Miranda Devine: Why Nancy Pelosi's days as Speaker of the House are numbered

Nancy Pelosi used to point her angry finger at Donald Trump, but she leaves him in the dust when it comes to busting norms, dividing Congress and causing mayhem. If anyone is to blame for the hyper-partisanship in Washington these days, it’s the spiteful House speaker. She behaves more like...

House Minority Leader Kevin McCarthy (R-Calif.) and Senate Minority Leader Mitch McConnell (R-Ky.) both said they did not watch Tuesday’s opening hearing of the select committee investigating the Jan. 6 attack on the Capitol. The panel probing the January riot convened for the first time on Tuesday to hear testimony...

Rep. Chip Roy of Texas tweeted out the names of the Republican senators who unsuccessfully voted against a proposal that would make women eligible for a military draft on Monday. He also included the names of Republicans who voted "yes" or "not present" on the proposal, which was part of the larger annual defense bill approved by the Senate Armed Services Committee on July 21.

Talks bogged down Monday on the Senate’s roughly $1 trillion bipartisan infrastructure package as pressure from both the left and right put the deal in jeopardy. Lawmakers at the center of the deal are struggling to draft a proposal acceptable to all sides but time is running out. The deal is hung up on disputes over how much to spend on public transit, water projects and broadband internet, and disagreements about how to pay for the flood of new spending.

The negotiations are in acute danger of collapsing after a weekend of fruitless discussions.

Former President Donald Trump lambasted Republican leadership for working with Democrats in what he described as the "so-called 'bipartisan' infrastructure bill." In a statement, paid for by his Save America PAC, Trump wrote that Senate Minority Leader Mitch McConnell and his group of "RINOS" (Republicans in name only) want to complete the deal done "at any cost" to show they can work with the "Radical Left Democrats."

Senate Majority Leader Charles Schumer (D-N.Y.) is urging Republicans to ignore former President Trump ’s pressure to walk away from weeks-long bipartisan infrastructure talks. Schumer, speaking from the Senate floor, pointed to Trump’s comments as an example of external forces “rooting for failure.”. “Will our Republican colleagues follow the absurd...

A new poll showed former President Donald Trump's son, Donald Trump Jr., is significantly more popular among Republicans than the GOP heads in both chambers of Congress. Trump Jr. has remained a vocal force within the Republican Party after his father left office and has been floated as a potential presidential or senatorial candidate. He hasn't committed to making a run for office but has been an active member on the campaign trail working to get Republicans elected and it's possible his endorsement could be an asset to candidates, as his father's is.

Florida Representative Matt Gaetz has suggested that Democrats are "scared" of any possibility former President Donald Trump will run to become the next House Speaker. Gaetz made the remark following Pennsylvania Democratic Representative Brendan Boyle's introduction of the MEMBERS Act, which would require that only elected members or delegates be eligible to serve as the Speaker of the House of Representatives.

Senators scramble to save infrastructure deal

The White House and senators from both parties are scrambling to pull their infrastructure talks back from the point of collapse, a sudden turnabout after key negotiators expressed confidence they were nearing a final deal. If the talks on the $1.2 billion framework fall apart, it would deal a serious...

Manchin weighs another term as his influence peaks

Sen. Rob Portman Says GOP, Dems About '90 Percent Of The Way There' On Infrastructure Deal

As Senators look to finalize a bipartisan infrastructure deal as early as Monday afternoon, GOP Sen. Rob Portman said that the negotiating Republicans and Democrats are "about 90 percent of the way there," the Associated Press reported. Sen. Mark Warner of Virginia, a Democrat, also expressed hope that both sides could settle the agreement by Monday afternoon.

Prepare to Work Weekend, Schumer Warns as Recess Nears With No Infrastructure Deal

U.S. Senate Majority Leader Chuck Schumer has told senators to be prepared to work through the weekend and threatened to keep them in session to the scheduled August recess, as negotiations on a bipartisan infrastructure package continue. "For years Republicans and Democrats have spoken about the need to invest more...

Washington — Democratic senators and White House officials negotiating the bipartisan infrastructure deal put forth a "global offer" to their Republican colleagues Sunday addressing all remaining issues, according to a Democratic source close to the talks, as members continue working toward an agreement on the nearly $600 billion plan. The...

Will Pence primary Trump — and win?

Not too long ago, The New York Times floated the idea of a Donald Trump -Ron DeSantis presidential primary. Aside from the lame attempt to sow division among Republicans, it was an absurd suggestion. DeSantis does not have the profile or national experience to challenge Trump. Plus, he must burn over a year running for reelection.