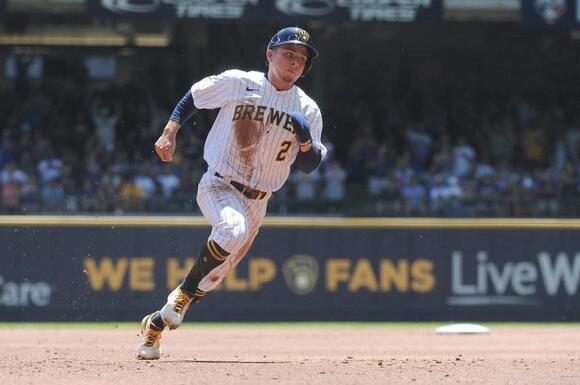 Avisail Garcia’s two-run homer in the sixth inning Sunday put the Milwaukee Brewers ahead for good as they topped the visiting Pittsburgh Pirates 5-2 to complete a three-game series sweep.

Luis Urias added an RBI triple and Daniel Vogelbach an RBI double for the Brewers, who have won nine of 10.

Brent Suter (8-3) got the final out in the sixth, and Josh Hader pitched the ninth for his 17th save, including one in each game of the series. 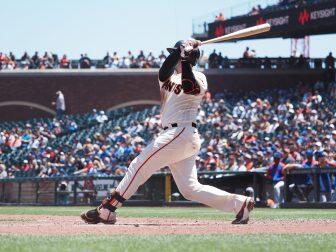 Jacob Stallings homered for the Pirates, who have lost seven straight.

Pittsburgh starter Wil Crowe pitched into the sixth, allowing two runs and two hits. He had one walk and a career-best eight strikeouts.

David Bednar (0-1) gave up two runs in his only inning, the sixth. 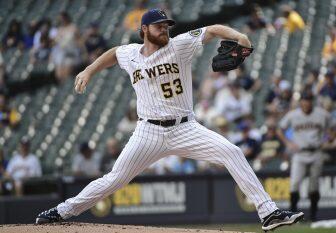 Pat Murphy served as acting manager for the Brewers, as Craig Counsell was excused to attend a family function.

Milwaukee took a 1-0 lead in the first. Urias led off with a base hit. Vogelbach doubled him home.

The Pirates answered in the second. Colin Moran opened with a single. An out later, he went to second on Gregory Polanco’s single, to third on Ben Gamel’s single and scored on Kevin Newman’s fielder’s choice.

While running to third, Moran slowed and grabbed at his lower back. He left the game after he scored with what the Pirates termed back tightness.

Stallings gave Pittsburgh a 2-1 lead with a two-out homer to center, his fifth, in the sixth inning.

Crowe retired 15 in a row after Vogelbach’s double before, in the bottom of the sixth, he issued a 10-pitch walk to leadoff batter Tim Lopes.

The Pirates pulled Crowe for Bednar, who gave up Urias’ triple to tie it 2-2 and, an out later, Garcia’s two-run homer to right, his 13th, to give Milwaukee a 4-2 lead.

In the seventh, Manny Pina doubled, went to third on Jackie Bradley Jr.’s groundout and scored on Christian Yelich’s sacrifice fly to make it 5-2.

We’ll likely see plenty more action this summer, with the countdown already on to the July 30 trade deadline. Let’s

10 MLB star players most likely to be traded at 2021 deadline, ranked

Major League Baseball’s non-waiver July 30 trade deadline is fast approaching. MLB teams are determining whether they want to ‘sell’ off their star talent in order to acquire young, future assets or ‘buy’ premier talent to contend for a championship this season. According to reports, the slumping Chicago Cubs are...

With the MLB trade deadline less than 48 hours away, the first-place Milwaukee Brewers have struck gold in a blockbuster

For the past two season the Milwaukee Brewers have found themselves in a situation that they are not too familiar with. That is lacking offensive production. Gone are the big bombers in Yasmani Grandal, Mike Moustakas, Eric Thames, and Jesus Aguilar. Those players were a near lock to hit 25-30 home runs each season. Christian Yelich remains with the Brewers but has yet to find his power stroke in 2021.

As we are now mere days away from the July 30th MLB Trade Deadline, the Miami Marlins have yet to make any notable moves. However, that could very easily change at any moment now. Miami holds multiple sought-after trade targets to contending teams around the league, with the arguable most-notable...

The Milwaukee Brewers have "checked in" with the Minnesota Twins on third baseman Josh Donaldson and Colorado Rockies shortstop Trevor Story, per Jon Heyman of MLB Network and The Score. However, Heyman noted that a Twins-Brewers agreement for Donaldson "seems like a long shot" considering the money left on the...

PITTSBURGH – Omar Narvaez homered and had four RBI, Brett Anderson pitched six strong innings and the Milwaukee Brewers scored eight runs in the first two innings to roll past the Pittsburgh Pirates for a 9-0 victory on Tuesday night. Narvaez's two-run homer started a three-run first inning, and his...

The Milwaukee Brewers and Arizona Diamondbacks have agreed on a trade that sends All-Star infielder Eduardo Escobar to the Brewers, the teams announced Wednesday. In return, the Diamondbacks are getting minor-league outfielder Cooper Hummel and minor-league infielder Alberto Ciprian. Escobar, 32, is hitting .246/.300/.478 (107 OPS+) with 14 doubles, three...

The Milwaukee Brewers need some help at first base, and rumor has it that there is a well-known first baseman available for trade at the Trade Deadline. The San Diego Padres are rumored to be looking to cut cap space after making a deal for Pittsburgh Pirates second baseman Adam Frazier.

Nogowski went 1-for-5 with a two-run double in Sunday's 7-6 loss to the Mets. He's started 10 consecutive games at first base for the Bucs, going 19-for-42 with four doubles and eight RBI. Starting first baseman Colin Moran (wrist) still has no return date, giving the 28-year-old additional opportunity at first base. In fact, with Erik Gonzalez (side) also sidelined, Phillip Evans is the only other healthy option at first. Nogowski's small sample size signals regression at some point, but in the meantime fantasy managers continue to enjoy production from an unexpected source.

Lineups in flux for Pirates, Brewers

Nothing has come easily this season for the Pittsburgh Pirates, who at the rate they are going could end up challenging for the cellar in the National League -- and that seems to be magnified during a stretch of change. Certainly, the Pirates are not handling change as well as...

Small (finger), who was placed on the 7-day injured list at Triple-A Nashville on Thursday, won't throw for at least two weeks before being re-evaluated, Adam McCalvy of MLB.com reports. Once he's cleared to throw again, Small will need additional time to ramp up for starting duty, so he could...

The Kansas City Royals benefited from three unearned runs in the sixth inning, capped by Nicky Lopez’s bases-loaded two-run double with two outs, to beat the Milwaukee Brewers 6-3 at American Family Field on Wednesday afternoon. Five of the six Royals’ runs were unearned as they took advantage of two...

The Milwaukee Brewers did not list Avisail Garcia in their lineup for Sunday's game against the Chicago White Sox. Garcia will catch a breather Sunday, while Tyrone Taylor covers right field and Jackie Bradley enters the lineup in centerfield and bats eighth. Our models project Garcia for 224 more plate...

UNDATED (AP) — The Milwaukee Brewers enjoy a large lead in the National League Central right now, but they were never able to beat the worst team in the AL Central this season. The Brewers put together a sloppy performance in a 6-3 loss to the Royals, allowing Kansas City...

Lance Lynn delivers on the mound and at the plate, leading the Chicago White Sox to a 3-1 victory against the Milwaukee Brewers to avert a sweep

MILWAUKEE — Earlier this season, Lance Lynn gave fellow Chicago White Sox pitcher Dylan Cease some hitting tips. Cease then had three hits against the Cincinnati Reds. Lynn followed his own advice Sunday against the Milwaukee Brewers, knocking in two runs with a second-inning single to right field. Lynn was...

Brewers' Luis Urias: Gets Sunday off

Urias is out of the lineup for Sunday's game against the White Sox. Jace Peterson will pick up a start at third base while Urias sits for the first time since the All-Star break. Through the Brewers' first seven games of the second half, Urias has gone 6-for-25 (.240 average) with a home run, two doubles, seven runs, three RBI and a 6:4 BB:K.