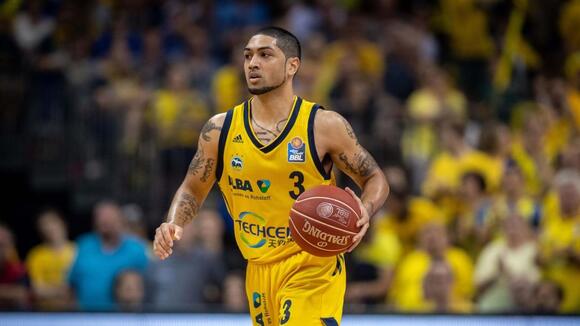 The 6-foot, 185-pound point guard was unable to play in the best-of-five championship series, after suffering a muscle injury in his thigh in game one of the semifinals against Ulm. However, that didn't stop the Albatrosses from winning two games on the road to take the series, including an 86-79 victory to clinch the series.

In 21 games between the regular season and the playoffs, the Seattle, Wash. native averaged 10.5 points, 5.0 assists and 1.5 rebounds while shooting 39.3% from the field and 39.3% on three-point attempts.

Siva has spent the last five seasons with Alba Berlin after signing with them prior to the 2016-17 season, and is the second-longest tenured player on the team. He was named best easyCredit BBL Point Guard in 2018 and runner-up in 2019.

Prior to Berlin, he spent a single year with the Italian club JuveCaserta. He was drafted by the Detroit Pistons with the No. 56 overall pick of the 2013 NBA Draft, but spent most of his time in the D-League (now G-League).

A four-year player from 2009 to 2013, Siva is one of the top point guards in program history. He has the second-most assists and steals with 677 and 254, respectively, and is a 1000-point scorer with 1,215 career points. As a senior, his collegiate career culminated with the Cardinals' third national championship.

The Cardinals hope to build on their first ACC win of the season when they host the Seminoles.
TALLAHASSEE, FL・1 DAY AGO
LouisvilleReport

Read what the head coach of the Cardinals, guard El Ellis and forward Kamari Lands said after their loss vs. the Seminoles:
LOUISVILLE, KY・15 HOURS AGO
LouisvilleReport

Brohm spoke to the media Wednesday for the traditional signing day, and answered a plethora of questions surrounding the Cardinals.
LOUISVILLE, KY・2 DAYS AGO
LouisvilleReport

How to Watch: Louisville Cardinals vs. Florida State Seminoles

The Cardinals hope to build on their first ACC win of the season when they host the Seminoles.
LOUISVILLE, KY・2 DAYS AGO
LouisvilleReport

The North Carolina wing in one of the top prospects in the Class of 2024.
LOUISVILLE, KY・1 DAY AGO
LouisvilleReport

Tale of The Tape, Predictions: Louisville vs. Florida State

Take a look at how the Cardinals stack up against the Seminoles for their Saturday matchup, and who the statistical models favor:
LOUISVILLE, KY・1 DAY AGO
LouisvilleReport

The Cardinals are the slim favorite to win the Atlantic Division, and are co-favorites with Wake Forest to win the conference as a whole.
LOUISVILLE, KY・2 DAYS AGO