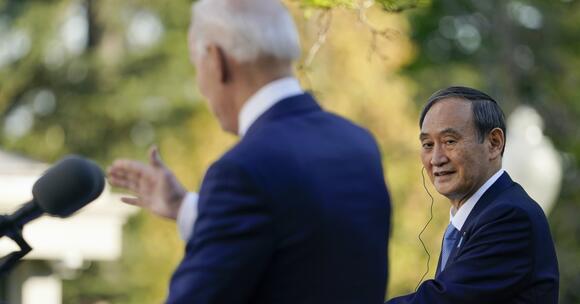 President Joe Biden offered a full-throated endorsement of next month's Summer Olympic Games during his sideline talks with Japanese Prime Minister Yoshihide Suga at the G-7 summit in the United Kingdom.

Biden's backing is a boost for Suga as he and organizers grapple with criticism over their planning of the quadrennial sporting event amid the pandemic after it was delayed by a year due to the COVID-19 outbreak.

"President Biden expressed pride in the U.S. athletes who have trained for the Tokyo Games and will be competing in the best traditions of the Olympic spirit," according to a readout of their conversation.

The pair also discussed climate change, North Korea, China, and Taiwan during their conversation at the three-day G-7 meeting.

The White House previously seemed less enthusiastic about the Olympics as Japan struggled to vaccinate its population against COVID-19. Japan's major newspaper last month called on the government to cancel the event, and the U.S. State Department issued guidance recommending U.S. citizens not travel to the country.

Others have also expressed concern about the event's safety protocols. Roughly 10,000 Olympics volunteers quit, some of whom were concerned about Japan's latest COVID-19 surge.

The Biden administration has since softened its stance, however, stressing the travel advisory was not a ban on attending the Olympic Games.

"The travel advisory is [an] advisory. It's not a ban," White House spokeswoman Karine Jean-Pierre told reporters on May 26. "We respected the decision to delay the Olympics, the games, last summer, and we understand the careful consideration that the Japanese government and the International Olympic Committee are weighing."

She added, "The government of Japan has stressed that the public health remains the central priority as they plan to host the games. Tokyo has assured us that they will keep in close contact with Washington as they — as their plans develop."

In response to the questions about whether the games should be canceled for a second time due to the pandemic, International Olympic Committee member Dick Pound said last month nixing the Olympics was "essentially off the table" because "the fact-based indications are that the bubble can be created and maintained."

Japan has seen a spike in COVID-19 cases since early March, with a seven-day average of 2,214 new cases per day as of last Wednesday, according to the Johns Hopkins University coronavirus tracker.

The Olympics are set to start in Tokyo on July 23.

President Joe Biden signaled the onset of more restrictions to stem the spread of COVID-19 as the highly contagious delta variant rips through the nation. While departing for Camp David on Friday, the commander in chief shouted a response to a reporter who asked if people should expect tougher constraints than what’s already been implemented.

TOKYO, Aug 2 (Reuters) - A Belarusian sprinter refused to get on a flight from Tokyo on Sunday after being taken to the airport against her wishes by her team following her complaints about national coaching staff at the Olympic Games. Krystsina Tsimanouskaya, 24, sought protection from Japanese police at...

What I Heard Trump Say on His ‘Perfect Call’

One phone call changed my life. On Thursday, July 25, 2019, I was seated at the table in one of the two Situation Rooms in the basement of the West Wing. The bigger room is famous from movies and TV shows, but this room is smaller, more typically businesslike: a long wooden table with 10 chairs, maybe a dozen more chairs against wood-paneled walls, and a massive TV screen. This was the room where President Barack Obama and his team watched a feed of the Osama bin Laden raid. This morning, the screen was off. We were all focused intently on the triangular conference-call speaker in the middle of the table. President Donald Trump’s communications team was placing a call to President Volodymyr Zelensky of Ukraine, and we were there to listen.

TOKYO — The United States nearly got Lilly King out of Japan without her going in on Russia’s controversial presence in these Olympic Games. But in her final media appearance before departing, King made her feelings clear—without actually mentioning Russia by name. The topic of doping came up at a...

The Biden administration aims to spend millions of dollars to cover the cost of lawyers for migrants who have illegally entered the country, a prospect that has infuriated immigration restrictionists.

US President Joe Biden is calling on states to offer 100 dollars to people to get vaccinated against Covid-19. Mr Biden is urging states and local governments to use funds provided to them by the coronavirus relief package to pay 100 dollar (£71) incentives to people who get jabbed. The...

Hunter Biden was asked Thursday about critics of his art sales who say the transactions may leave his father, President Joe Biden, and the White House in an ethical dilemma, to which he said, "F*** 'em"

While President Biden (D) may have characterized himself as a unifier literally moments after his inauguration, a new poll has shown that the new president has not yet lived up to that promise. The breaking poll reports that 51% of Americans so far, disapprove of Joe Biden’s job as president.

PRISTINA (Reuters) - Kosovo's president on Sunday awarded a medal to the late son of U.S. President Joe Biden for his service in building the country’s justice system after war ended more than two decades ago. Beau Biden worked in Kosovo after the 1998-99 war, helping to train local prosecutors...

South Korean President Moon Jae-in entered office in 2017 with a personal mission: facilitate a new round of diplomacy with North Korea and create a period of peace, stability and tranquility that has eluded the Korean Peninsula for his entire life. For Moon, the mission was as much a legacy item as a personal one. His parents fled the North during the 1950-53 Korean War, which ravaged the entire peninsula, killed millions of people and ended in an armistice agreement that continues to this day.

NO MORE MR. NICE GUY: The days of police pleading and cajoling are coming to an end. In announcing new vaccine rules for federal workers, President Joe Biden said he wants to require all members of the military to roll up their sleeves and get a vaccine to stem the spread of the new delta variant of the coronavirus.

White House: National vaccine mandate not under consideration 'at this time'

The White House is downplaying President Joe Biden stoking speculation that his administration was open to a national mandate for coronavirus vaccines.

WASHINGTON — The Biden administration announced new sanctions on Friday against Cuba’s national revolutionary police and its top two officials as the U.S. looks to increase pressure on the communist government following this month’s protests on the island. The Police Nacional Revolcionaria and the agency’s director and deputy director, Oscar...

Joe Biden said that he has felt self-conscious in the role of president, in a town hall hosted by CNN in Ohio. "The first time I walked down the stairs and they played Hail to the Chief I said, 'Where is he?'" he told a vaccinated crowd on Wednesday. "You...