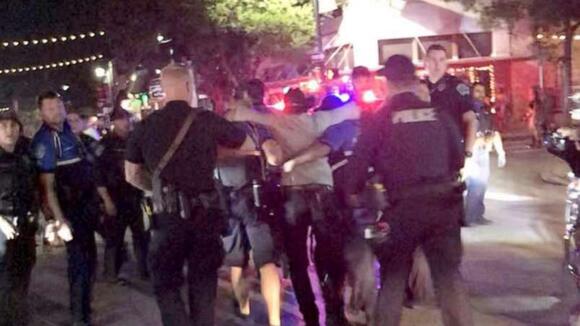 At least four major U.S. cities were reeling from an onslaught of mass shootings over the weekend that left at least 38 people wounded, six dead and police officials alarmed that the surge in gun violence is a prelude to a bloody summer as the nation emerges from the pandemic.

Police in Austin, Cleveland, Chicago and Savannah were all investigating on Sunday mass shootings that erupted over a six-hour streak that began around 9 p.m. on Friday and spilled over into Saturday morning.

On Sunday morning, Savannah police were working to identify the suspect or suspects who rolled up in a dark-colored sedan and unleashed a barrage of gunfire around 9 p.m. Friday on a group of people standing in front of a home in a residential neighborhood of east Savannah. Minter identified a 20-year-old man killed in the ambush as Arthur Milton of Savannah.

He said two of the adults hit in the shooting were in critical condition. The baby and the two teenagers, ages 15 and 16, suffered non-life-threatening wounds.

Minton said investigators collected 60 shell casings from the shooting scene and added that three houses and several cars were damaged by gunfire.

The chief said the targeted home is the same one someone sprayed with bullets on Tuesday, a shooting that left no one injured.

"We don't think it was a coincidence," Minter said.

Roughly four hours after the Savannah shooting, gunfire erupted on a street in Austin's downtown entertainment district, leaving one dead, 13 people wounded and one person in critical condition, police said.

One suspect was arrested and a second is being sought, said interim Police Chief Joseph Chacon.

Chacon said the mass shooting broke out about 1:24 a.m. and appeared to have been prompted by a dispute between two groups. He said most of the shooting victims were innocent bystanders.

"But this crisis requires a broader, coordinated response from all levels of government," Adler said. "One thing is clear - greater access to firearms does not equal greater public safety."

MORE: 3 graphics tell the story of mass shootings during the pandemic

The Austin mass shooting was quickly followed by one that erupted on a sidewalk on the South Side of Chicago that left a woman dead and nine people injured, according to police.

Chicago police officials said investigators are searching for two suspects who walked up to a crowd gathered on the sidewalk in a business district in Chicago's Chatham neighborhood and opened fire just after 2 a.m. on Saturday, according to a police department online incident report. The nine adults who suffered non-life-threatening injuries in the shooting ranged in age from 23 to 46, according to the report.

The Cook County Medical Examiner identified Kimfier Miles, 29, as the woman killed in the shooting.

Those shot in the Chicago attack were among a total of 44 people shot across the city, including six fatally, since Friday, according to a review by ABC News of online crime reports.

The Gun Violence Archive, an online site that tracks shootings across the country, reports that there have been 270 mass shootings in 2021. The site defines mass shootings as single incidents in which four or more people are shot, regardless of whether anyone dies.

Chuck Wexler, executive director of the Police Executive Research Forum, told The Associated Press that the seemingly non-stop incidents of mass shootings and surging violent crime across the country has police officials bracing for a long and perilous summer as COVID-19 restrictions continue to be lifted and people begin to interact more.

"There was a hope this might simply be a statistical blip that would start to come down,” Wexler told the AP. "That hasn’t happened. And that’s what really makes chiefs worry that we may be entering a new period where we will see a reversal of 20 years of declines in these crimes."

A Florida woman caught in a love triangle with the son of a Florida state senator has been arrested for busting into his date unannounced and killing him, authorities said. Lakoria Shamece Washington, 24, allegedly forced her way into an apartment earlier this month and fatally shot her ex-girlfriend’s date, Jason Campbell, the son of former state Sen. Daphne Campbell, NBC Miami reported.

FORT DEPOSIT, Ala. — Police in Lowndes County, Alabama are searching for a suspect in a deadly shooting at a funeral last weekend. Learn more in the video above. Gunfire erupted during a funeral service in Fort Deposit for James Gipson, who recently died of cancer. Family members said a vehicle drove into the cemetery with loud music blaring, sparking an altercation. Moments later, witnesses reportedly told police the driver of the vehicle began firing into a crowd of about 60 people after he was told to turn down his music.

FITZGERALD, Ga. — After over a year and a half since a pregnant woman was found dead in her home in Fitzgerald, Georgia, authorities are still looking for her killer. The FBI is doubling the reward to $10,000 for information leading to the arrest of the person who took the life of 24-year-old Kasara Brown.

Surveillance video shows an officer punching a woman in the face after she tried to bite him during a violent arrest at a Walmart in New York. (WSTM, Dewitt Police Department, Walmart, CNN) Multiple cameras captured the violent incident inside the East Syracuse Walmart on July 4. These American Clog-Free...

Authorities said Saturday they have now arrested five suspects in the death of a Georgia mother of two and Lyft driver earlier this year — and three more suspect remain at large. Venezuelan-born Rossana Delgado, 37, disappeared in mid-April in DeKalb County, near Atlanta. Four days after she was reported...

Chicago shooting: 1-month-old shot in head among 7 wounded in Englewood

One-month-old Terriana Smith remains hospitalized after being shot in the head during a brazen daytime shooting in Englewood.

Two fugitives wanted in connection with the shooting of an police officer in Texas were arrested Thursday morning at the Dogwood motel in Mountain View. According to a news release from Stone County Chief Deputy Dammon McGilton, the department was contacted by both the U.S. Marshal’s service and the 16th Judicial District Drug Task Force that 43-year-old Royce Wood and his girlfriend, 32-year-old Tiffany Caswell, were possibly at the motel.

CHICAGO - New surveillance video shows a mass shooting unfold Thursday night on Chicago’s South Side. A one-month-old baby girl was shot in the head and critically injured. Six other people were also hurt. The video shows two men shooting high-powered weapons, aiming all over 66th and Halsted in the...

Three people have been shot outside of a barbershop following an argument between two men in their 40’s over who came first in a foot race over a month ago.

Matima Miller, also known as TikTok star Swavy, 19, died in a shooting on July 5 in Wilmington, Delaware. According to Delaware Online, police responded around 10:42 a.m. and Miller was found with a gunshot wound. He later died at the hospital. Police are currently investigating, according to the Wilmington...

FBI: Man wanted for shooting police officer in the face may be in South Carolina

CHARLESTON, S.C. (WCSC) - FBI officials said a man wanted for shooting a police officer in the face may be in South Carolina. Authorities are looking for Othal Toreyane Resheen Wallace who is wanted for first-degree attempted murder of a law enforcement officer with a firearm in Florida. FBI Supervisory...

CHICAGO - A man allegedly fatally shot a woman and wounded two other men over the weekend in Austin before being shot by a concealed-carry holder, police said. Calvin Gonnigan, 34, is charged with one count of murder and two counts of attempted murder, as well as one count of aggravated assault with a firearm in the July 4 incident, Chicago police said.

'She wasn't a nobody': Infant exhumed 30 years after death

CHICAGO — After a violent holiday weekend where 106 people were shot, 16 of them killed, residents in the South and West sides were left trying to understand why shootings keep happening in their neighborhoods. Some of those shot over the weekend were children, including a 15-year-old who was shot...

The boyfriend of a missing New Mexico Army veteran is facing murder charges after her body was discovered in Nevada, authorities said. Cecelia Barber Finona, a 59-year-old US Army vet, was last seen at her Farmington home in May 2019. Her boyfriend, Jerry Jay, was also missing from the New Mexico residence and evidence there led detectives to be “very concerned” for the Navajo woman’s safety, Farmington police said in a statement Friday.

PHOENIX — U.S. Marshals have arrested a couple in Phoenix wanted for the murder of a woman in North Carolina earlier this year, the agency said Tuesday. Tangela Parker, 50, and Eric Parker, 62, were found around 12:30 p.m. near Deer Valley Road and 35th Avenue after being on the run and wanted since the Jan. 13 murder of Phelifia Marlow.