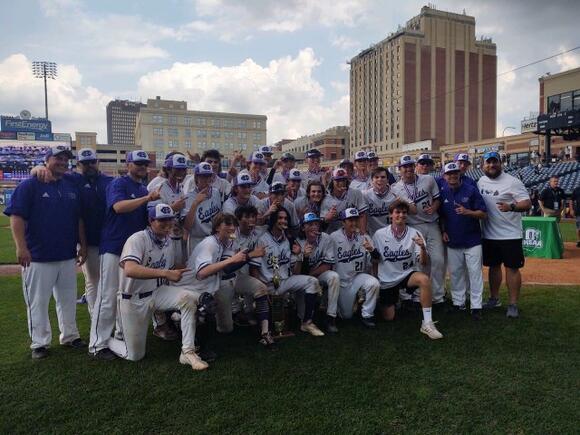 CHCA (23-8) won the program's first state title in its fourth state tournament appearance. The Eagles were a 2014 state runner-up.

Junior Cooper Robinson threw a two-hitter to help lead the Eagles. He struck out 11 Archbold batters and allowed just one run on one walk. His command was superb all day, Schulz said.

Junior Colin Ames was 2-for-3 including a double, two RBI and a run scored. Junior Ty Yelton was 2-for-3.

Ames hit with a double to left center in the bottom of the second inning that scored sophomore Johnathan Russell and junior Andrew Brock. Ames later scored on an error.

Junior Jack Vogele reached on a fielding error which allowed Yelton to score. Vogele said the state title has meant so much to the team.

"It's the best feeling in the world," Vogele said. "It almost made me cry tears of joy. Nothing can relate to this."

Rain accompanied the Eagles along the way to Akron. This weekend's state tournament was postponed a day due to weather. But, the Eagles made the most of its opportunity.

On Sunday, the state final was delayed nearly an hour due to rain but the Eagles didn't seem to mind. CHCA scored four runs in the second inning to take an early lead on Archbold.

It is the first Ohio High School Athletic Association state baseball title for a Greater Cincinnati team since Moeller (Division I) won in 2015.

The Reds dinger-slinger dialed long-distance in the top of the 6th against Mets pitcher Drew Smith, Votto's 7th longball in the past 7 games, tying Jim Thome, Barry Bonds, Kendrys Morales and Kevin Mench for second place for the record of most consecutive games with a home run.

Moeller baseball plans to play in Kremchek Stadium in 2022

Moeller High School plans to have a groundbreaking ceremony for its new athletic complex Thursday morning in Miamiville. The Crusaders' baseball team plans to play in Kremchek Stadium in spring 2022.

Former Moeller basketball standout Miles McBride was selected No. 36 overall in the NBA Draft Thursday and is going to the New York Knicks.

Purcell Marian freshman wing Dee Alexander has 18 scholarship offers, but the girls basketball standout has kept the attention in perspective this summer as she shifts her focus to the high school season.

“You just feel that excitement that you forgot that you missed,” Bengals head coach Zac Taylor said. “Now that it’s back, I know that our players are juiced up. Our fans, our coaches, everybody’s ready to get a full crowd out here and get after it.”

Crowds gathered early on Saturday at MVP Sports Bar and Grille in Silverton to cheer on Rose Lavelle and the US Women's National Team in the Tokyo Games.