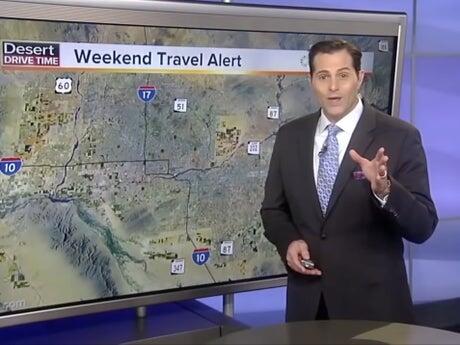 The death of Birmingham TV anchor and former Alabama college football player Christopher Sign is being investigated as a suicide, police have said.

After a 911 call at 8.13am on Saturday, police and fire personnel arrived at a residence in Hoover, south of Birmingham, Alabama, and found the 45-year-old dead.

“We have lost a revered colleague whose indelible imprint will serve forever as a hallmark of decency, honesty and journalist integrity. We can only hope to carry on Chris’s legacy. May his memory be for blessing,” Mr Land said.

While working as a reporter and a morning anchor at ABC affiliate KNXV-TV in Phoenix , Arizona , Mr Sign was the first to report on the June 2016 meeting between former president Bill Clinton and then-attorney general Loretta Lynch on the tarmac at Sky Harbor International Airport in Pheonix during the presidential campaign between Hillary Clinton and Donald Trump.

Mr Sign wrote a book following the story called Secret on the Tarmac .

Mr Sign grew up near Dallas , Texas and worked as a reporter at ABC 33/40 between 2000 and 2005. He reported on stories such as the 2001 Brookwood mine disaster and hurricanes Charlie, Frances and Ivan.

The station announced in 2017 that he was returning to the channel, this time as an evening anchor.

“The opportunity to rejoin ABC 33/40 as a weeknight anchor in 2017 was too good of an opportunity for him and his family to pass up,” the station wrote.

“What most people don’t know is Chris turned down an opportunity to work for one of the national networks to come to ABC 33/40, and he made that decision because of his family.

“That decision put him in a place where he could see his boys off to school in the mornings, watch them play baseball in the evenings, and take them fishing on the weekends,” the station added.

He won an Emmy in 2014 for breaking news for his coverage of the shooting of two police officers in Phoenix.

He also won an Edward R Murrow Award for spot news for his reporting on the hunt for the “Baseline Killer” and “Serial Shooter” in Phoenix during the summer of 2016.

Attending the University of Alabama in the 1990s, Mr Sign played offensive lineman for the Crimson Tide for four years.

He met his wife Laura, a volleyball player, at the university. They have three sons together.

“Chris was a tremendous leader in our newsroom,” ABC 33/40 wrote on their website on Saturday.

“He worked with our reporting staff on a daily basis, but also worked behind the scenes with the I-Team and with news managers on coverage of major events. You were very likely to get an email from him with a story idea in the middle of the night. He was passionate about journalism and showed it each and every day as he pushed himself and his colleagues to be the best.”

Elie Honig excoriates the man who ran interference over Russia. He might have considered attorneys general gone before

With Biden coming to campaign, Virginia’s race for governor takes on national overtones. But where’s Trump?

RICHMOND — Republican Glenn Youngkin likes to tell supporters that a victory for him in the Virginia governor's race would "send a shock wave" across the country. It would repudiate Democratic rule not only in Richmond, he says, but in Washington as well. Want proof? His campaign points to the...

President Joe Biden and the Democrat-led Senate are working quickly to appoint judges from a broad range of backgrounds to the federal bench as they counter Republican efforts to reshape the bench over the previous four years.

A former senior advisor to President Clinton has praised Donald Trump for being the "most effective" and "perhaps the only" spokesperson to call out President Biden's "disastrous" policies. "There is no other national figure dissenting from Biden's policies and laying out how disastrous they are," Dick Morris told WABC 770...

U.S. Capitol Police officer Harry Dunn said the attacks that Black law enforcement agents endured on Jan. 6 were not just physical, but verbal. In a March interview with The Washington Post, Dunn said he was called the n-word more than a dozen times that day in January. Black police officers, he said, “were fighting a different fight” as a throng of Donald Trump’s supporters stormed the U.S. Capitol grounds and building — some violently attacking police officers standing in their way.

What Tom Brady Has Said About His Friendship With Donald Trump

Tom Brady's thinly-veiled swipe at Donald Trump's claims of fraud at the 2020 presidential election raised eyebrows on Tuesday—not least because the athlete and former president have long been known to be friends. As Tampa Bay Buccaneers quarterback Brady, 43, and his teammates visited the White House following their Super...

Former Republican Senator Bob Dole said that President Joe Biden won the 2020 election fairly and there is no proof of election fraud. In an interview published in USA Today on Thursday, the same day as his 98th birthday, Dole called Biden, his once longtime colleague in the Senate, a "great, kind, upstanding, decent person."

The men accused of plotting to kidnap Michigan Gov. Gretchen Whitmer last September claim they were set up by the FBI because of their conservative political views. There were at least 12 FBI informants involved in the investigation to thwart the alleged scheme by a militia group known as the “Wolverine Watchmen” — but the agents actually took an active part in it right from its inception, according to court filings, evidence and dozens of interviews reviewed by BuzzFeed News — and now some members of the group are accusing the feds of entrapment.

Arizona State Sen. Paul Boyer has hit back at former President Donald Trump, with whom the Republican lawmaker is engaged in an online spat over the latter's continued false claims of electoral fraud and peddling of conspiracy theories. Boyer is among the Arizona Republicans calling on the state GOP to...

'They got what they wanted': Indictment outlines U.A.E. wins with Barrack working Trump

Rachel Maddow reports on how the federal indictment against Donald Trump insider Tom Barrack outlines how well served the United Arab Emirates was by allegedly having Barrack as an agent influencing Donald Trump on their behalf, and how lucrative the arrangement was for Barrack. July 21, 2021.

‘It’s chilling what is happening’: a rightwing backlash to Biden takes root in Republican states

Trump is a complication for Republican hopes in Virginia

Former President Trump is threatening to complicate Republican Glenn Youngkin’s bid for governor in Virginia, where the ex-businessman is trying to extend his support to the very suburban voters who fled from Trump in 2020. Youngkin has said he is “honored” to receive Trump’s endorsement, noting the former president “represents...

Former U.S. President Bill Clinton once declined an invitation to have tea with Queen Elizabeth II because he wanted to try Indian food like a true London tourist, recently declassified documents say. According to The Guardian, the documents allege that the American politician was on his first official visit to...

Rachel Maddow looks back at how the Trump campaign denied reporting that they had paid actors to fill out the audience at Donald Trump's presidential campaign announcement in 2015, only to confirm, now that Trump is out of office, that the story was true after all. July 20, 2021.

Polls overstated Democratic support ‘across the board’ in 2020 elections, study shows

QAnon fanatics are rebranding their 'secret war.' And it could work.

A few years into waiting for “the storm” to sweep away former President Donald Trump’s enemies, some believers in the prophetic QAnon conspiracy theory have decided to take matters into their own hands. These “digital soldiers” aren’t picking up guns or marching on the Capitol — though many actually did...

Trump rages over post-presidential books he did interviews for

The avalanche of coming books has caused recriminations. And there is anxiety about what’s to come.

Frida Ghitis (@fridaghitis) a former CNN producer and correspondent, is a world affairs columnist. She is a frequent opinion contributor to CNN, a contributing columnist to The Washington Post and a columnist for World Politics Review. The views expressed in this commentary are her own. View more opinion on CNN.

Former President Donald Trump chastised an Arizona Republican who said the chamber's controversial audit of the 2020 election in Maricopa County "makes us look like idiots."