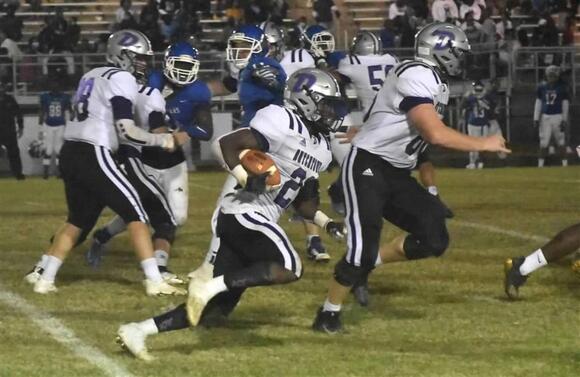 Tennessee continues a hot streak on the recruiting trail by adding a commitment from vastly underrated Louisiana running back Dylan Sampson. We take a look at the Dutchtown prospect will bring to Knoxville.

The Vols already have a young stable of backs that are expected to produce at a high level, but Sampson adds another element with his speed. The name of the game is speed in the SEC, and the Louisiana native is as fast as anyone in the class. He is a track star, and he has put up blistering 100m times. Sampson has eclipsed 1,000 yards on multiple seasons during his high school days, and his speed is a key reason for that, but there is more to his game, which the Vols covet.

The 5'10", 180lbs back is not the biggest player in the class, but he runs like he is. When a defender is able to get Sampson sized up, he makes them pay for and runs well through contact. Sampson will be the ideal scatback in Tennessee's offense that can make plays in a variety of ways while bringing added special teams value. Sampson is a natural pass catcher, which is a key requisite for playing in Josh Heupel's offense. Elsewhere, the Louisiana native's speed is obvious when he gets to the second level, but his vision sets him apart. Sampson's ability to set up his blocks and set up defenders is key. He does not let arm tackles bring him down, as he runs through contact routinely after making defenders guess.

7 of 10. Sampson is highly underrated in this class. He has a nice list of offers, but the Vols won out. He is the perfect first back to add to this class, as he has room to grow physically and within his own game. You can never bring enough speed to your roster, and there is no other running back the Vols could add in this class that would possess what Sampson has. This also sets Jerry Mack up to go big game hunting with his other spot, as he can focus in on landing one of the bigger, immediate impact prospects in the group.

Robert Griffin III has the social media world buzzing on Wednesday evening. That’s usually not a good thing. The veteran NFL quarterback is currently weighing his future. The former top NFL Draft pick is still a free agent, though he’s reportedly being pursued by more than just professional football franchises. Multiple networks are reportedly in a bidding war for RG3’s services as an analyst. Some see Griffin as the next Tony Romo-like analyst.

Dak Prescott and his girlfriend Natalie Buffett flew in to Omaha on Tuesday to catch the College World Series. Buffett shared a few clips on her Instagram Story on Tuesday showing them in a private plane on the way to Omaha. She also showed herself holding up a ball that she apparently got her hands on while at the game.

ESPN’s Dianna Russini Has A Question For NFL Fans

Paul George has been one of the most heavily scrutinized NBA players in recent memory for his lackluster showing across multiple postseasons. Even as the Los Angeles Clippers star tries to lead his team through the Western Conference Finals without Kawhi Leonard, he still hasn’t gotten his due. He may...

During the mid-2000s, running back Marion Barber earned himself a reputation for being one of the toughest ballcarriers in the NFL. After a strong college career with the Minnesota Golden Gophers, Barber went on to have a strong, although brief, stint at the professional level. Unfortunately, Barber has had a...

Barry Sanders is arguably the biggest legend in the history of Oklahoma State outside of perhaps the late T. Boone Pickens. But it’s only this coming year that he’ll be joining the Cowboys Ring of Honor. Stadium college football insider Brett McMurphy reported on Thursday that Sanders will be the...

On Thursday morning, the Miami Hurricanes suspended a former top recruit after troubling allegations arose. The team suspended former top recruit Avantae Williams after police arrested him earlier in the week. According to a report from ESPN, Williams is facing three counts of aggravated battery of a pregnant person. “We...

After taking three official visits in June, the nation's top running back prospect, according to Rivals.com is set to announce his college commitment. Germantown High School star Branson Robinson will make a live commitment on CBS Sports HQ at 2:00 pm central time. Entering June, Robinson was down to five...

PITTSBURGH -- The Pittsburgh Steelers have their starting center - for now. Head coach Mike Tomlin addressed the media following the Steelers' opening day of training camp and named rookie Kendrick Green as the starting center for the Hall of Fame game. The game will open Pittsburgh's preseason against the Dallas Cowboys.

The Chicago Bears‘ greatest rival in the last one and a half decades is easily Aaron Rodgers. However, Chicago’s archnemesis is more likely to move out of the NFC North after declining an extension from the Packers that would have made him the highest-paid quarterback in the NFL. According to...

The NFL announced some new rules on Thursday regarding COVID-19 and there’s been a whirlwind of reactions across the league from players. But, Arizona Cardinals star DeAndre Hopkins had the most shocking response of them all. While he did already delete it, this is what Hopkins had to say:. In...

The preseason Week 3 contest between the Tennessee Titans and Chicago Bears will be aired nationally on NFL Network, the league has announced. The game, which will kickoff at 7 p.m. ET on Saturday, Aug. 28 and take place at Nissan Stadium, will be blacked out in local markets but can be watched on WKRN, or listened to on WGFX 104.5 FM-The Zone.

After having a historic five players selected in the first 10 rounds of the 2021 MLB Draft on Monday, Tennessee baseball followed suit on Tuesday as two more players, one commitment and one signee were selected in the final 10 rounds. Overall, this year marks the fifth time in program...

The Tennessee athletic department currently owes $665,000 in legal fees surrounding the investigation into the football department’s recruiting violations under former head coach Jeremy Pruitt. Public records, requested and reported by WBIR TV in Knoxville, show that the university has racked up the $665,000 bill while Bond, Schoeneck & King...

The Green Bay Packers have decided to bring in notable tight end for a workout next week. Similar to recently signed Jacksonville Jaguar Tim Tebow, it’s another former quarterback who’s made the move to the pass-catching position. According to NFL Network’s Tom Pelissero, the Packers are bringing in tight end...

Over the past few weeks, some of our fellow baseball writers here at SB Nation have been working to set up a mock draft with a representative from every team’s respective SBN site. Given a chance to play scouting director/GM for the day, here is how the first round of the 2021 MLB draft played out for the Yankees.

The impending arrival of NFL training camps means an escalation in buzz in the rumors market. Both go hand-in-hand because as players report to camps around the league, details like holdouts and contracts start to move to the forefront of the line. Add in actual positional battles and a strong remaining free-agent class, and an uptick on the rumor mill is inevitable.

May 1, 2021; Eugene, Oregon, USA; Oregon Ducks wide receiver Troy Franklin (11) makes a catch in front of corner back Jaylin Davies (6) during Oregon Spring Game at Autzen Stadium. Mandatory Credit: Soobum Im-USA TODAY Sports. For a while earlier this week, it looked like Isaiah Sategna was headed...