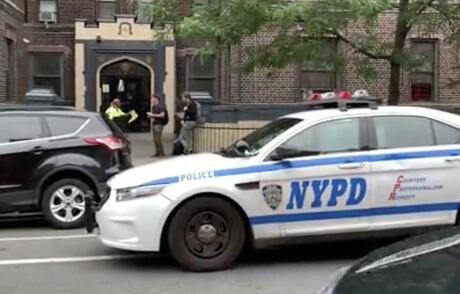 A disturbing scene unfolded in Brooklyn, New York, over the weekend when a naked mother tossed her newborn daughter and toddler son out of their second-floor apartment window.

The incident occurred at 11.20am on Saturday 12 June in the Brownsville neighbourhood. The mother, who remains unidentified, attempted to hurt her children, who were also unclothed through the ordeal.

The mom reportedly said she was “tired of being by herself” as she slammed the infant’s head into the sidewalk, according to an eyewitness as reported by The New York Post .

“I don’t think she intentionally meant to hurt her kids because I didn’t see any signs of anger. She didn’t have any, like, facial expression. She didn’t say anything to the kids.” Carl Chin, 41 said to reporters.

“Within seconds we heard a thump, like the body just his the ground. So she jumps up to the window and sees the two kids on the floor,” he said, as reported by The Daily Mail .

Next, Mr Chin’s fiancee yelled for him to call 911 and pleaded with the mom to not hurt her kids.

He continued to the Mail, “I run to the back and and I see the mom has the child in one hand and she drops her. The infant. She drops her a couple of times,” he said.

He said that he went to stop her, and described what he did next to help the children.

“I kind of forcefully took the baby from her, using my forearm, and got her to loosen her grip with the baby. We exchanged a few words, and within the seconds the FDNY and ambulance came and took care of it,” Mr Chin said to reporters.

He said that the toddler seemed to be OK, but that the baby appeared bruised and hurt.

“She was trying to open her eyes and it was closing. Half her face was bruised. I hope she didn’t hit her head on the concrete, but her head was shaped kind of like after you hit it hard and swelling starts to form,” he said.

He said that the woman thanked him, and became calm after he intervened.

“I have no idea what was going on with the mom. I had never met her or seen her prior to this but she clearly is not in the right state of mind. She must have been having some kind of mental breakdown because they were all naked,” he said.

His sister-in-law was also at the scene, and spoke to The New York Daily News about what she witnessed.

“We saw the newborn, we started screaming. It was three of them naked on the ground,” She said, noting that the baby was bleeding and the toddler was bruised.

According to the New York Police Department, the baby girl was admitted to Maimonides Hospital in a serious condition and the woman and the boy were sent to Brookdale Hospital with injuries believed not serious.

No more additional information has been given.

The onset of the Covid-19 pandemic has exacerbated many problems in society. This includes an increase in rates of poor postpartum mental health, according to a study from the University of Alberta.

According to New York State’s Office of Mental Health , poor maternal mental health can lead to urges to hurt yourself or your children, and this is considered to be an urgent crisis.

Mom slits 2 children’s throats, tries to do the same to herself but stops ‘because it hurt’

A Florida woman was sentenced on Friday to life in prison without the possibility of parole for allegedly fatally stabbing her two children in December. Berenice Jaramillo-Hernandez, 26, pleaded guilty to murdering 5-year-old Mateo Jaramillo and 6-year-old Katherine Jaramillo, before putting masks on both of their faces. The mother confessed to killing her son in the bed before killing her daughter, who witnessed her brother’s slaying and tried to flee, according to the Gainesville Times.

Pregnant Mom Crushed, Toddler Decapitated After Truck Runs Over Them

A 25-year-old woman and her 2-year-old daughter were killed in India after a truck struck their bike. The woman's 27-year-old husband was critically injured and taken to a hospital. The driver of the truck was arrested, and a case has been registered in connection to the incident. A pregnant woman...

A homicide and criminal mistreatment investigation are underway in Washington after a 14-month-old died at her home earlier this month. The Spokesman-Review reported that the toddler girl had been dead for hours by the time her 20-year-old mother called 911 to her South Hill apartment on July 3. A firefighter arrived at the residence first and immediately determined the child was dead, and stiff and cold to the touch.

A California mother and her 14-year-old son have been arrested after the son “accidentally” shot his toddler half-sister. Thirty-seven-year-old Veronica Pyatt, the teen, and Pyatt’s 20-month-old daughter were in a vehicle in San Bernardino Tuesday afternoon, San Bernardino police said. The teen was “manipulating a loaded firearm in the back seat” of the vehicle, police said. The gun discharged, striking the toddler in the right upper leg.

California mom, 37, and her son, 14, are arrested 'after he accidentally shot his baby sister in the leg "but mom ignored it and kept driving home"'

A California woman has been arrested on child abuse charges after police say her 14-year-old son accidentally shot his 20-month-old sister in the leg inside their mother's car. According to the San Bernardino Police Department, the mother, identified as 37-year-old Veronika Pyatt, continued driving home and then proceeded to unload...

‘I tried to defend myself, but before I knew there were just loads of them all on top of me.’. A pregnant teen attacked at a pub after watching a sports game has apparently lost her baby after enduring severe injuries. Beth Newman, 18, was watching the Euros final at...

A newborn baby girl was found inside a garbage bag, which was dumped in a bush, near the French city of Lyon. Local authorities said the infant was found Tuesday by passers-by. The cries of the child, believed to be just a day old, grabbed the attention of those walking by a street in a residential and shopping area in the town of Meyzieu, Euro News reported.

A man was left so badly beaten after a confrontation with his neighbors that he was unrecognisable even to his own family, according to local media. Frank Penkava, 42, from Florida, was placed in a medically induced coma with multiple fractures to his face following the brutal attack, NBC Miami reported.

In a heart-stopping save captured on video, a mom managed to pull her 5-year-old son from the window of a car after he was snatched in an apparent kidnapping attempt on the streets of New York. The little boy was walking a few steps ahead of his mother, Dolores Diaz,...

A New York mother foiled an attempted kidnapping this week after she managed to pull her 5-year-old boy out of an abductor’s car window seconds before it sped away. The youngster was snatched by a 24-year-old man off the sidewalk at 117-02 Hillside Avenue in the Richmond Hill section of Queens around 8 p.m. on Thursday, according to the New York City Police Department.

A mother from Queens, in New York City, is being hailed a hero after successfully saving her son from a failed kidnapping attempt on Thursday night. In a video shared by the New York Police Department, Dolores Diaz can be seen walking down Richmond Hill near the corner of Hillside and Myrtle avenues with her three children.

It happened within seconds. A 5-year-old New York City boy was running down the street a few steps ahead of his mother when a man sitting in a nearby car tried to abduct him — right in front of her. Her protective motherly instincts kicked in. Now, the boy is...

A mother and her 14-year-old son were arrested after California police said he accidentally shot his sibling. San Bernardino police said that Veronica Pyatt was driving on Tuesday with her son and 20-month-old daughter in the back seat of the car, according to a news release. Pyatt’s teenage son was...

The boy sexually assaulted the teen twice about three months back. The teen allegedly told their mother about the abuse. A 12-year-old boy has raped his 16-year-old sister twice, impregnating her. The abuse, which took place in India's capital Delhi, came to light when the employer of the children's mother...

A woman in India sacrificed her life to save her toddler son from a deadly snake that had entered their home. The mother died Thursday after she was bitten by the snake in Deulabad village in the eastern state of Odisha, media reports said Sunday. The woman was lying on...

A MUM has issued a heartbreaking warning telling people NOT to kiss babies after her newborn son died from an infection. Dakota Elizabeth Goss bravely shared her story on TikTok earlier this week in a video that's been seen by over 1.4 million people. The mental health advocate welcomed her...

A newborn baby's body was found abandoned near a gas agency in India on Tuesday. The police said the body had been partially eaten by stray dogs. Staff working for the gas agency in the northern state of Punjab saw the canines feeding on the body, local media Jagran.com reported [Google Translate showed]. They then informed the police who arrived at the scene and took the remains to a nearby hospital.

Girl, 17, ‘beaten to death and hung from bridge for wearing jeans’ dreamed of becoming police officer

A TEENAGE girl allegedly beaten to death by members of her family before being hung from a bridge because she wore jeans had ambitions to join the police force. Neha Paswan, 17, reportedly became embroiled in a row with her grandparents after she donned denim during a religious ritual in India, and was later found hanging from a bridge.

The incident took place in Nairobi's Kirinyaga County. A woman had gone to relieve herself in the toilet when she saw the baby. The newborn was rescued and rushed to a local hospital for treatment. A newborn was rescued from an 80-feet pit toilet on a farm in Kenya's Nairobi...

A toddler stranded in a North Boulevard apartment for several days after his mom died was rescued Friday morning and hospitalized for dehydration. The mother's death was discovered only after an apartment maintenance worker heard an alarm blaring from her unit, officials said. After no one answered his knocks on the door, he went inside to see what was going on.