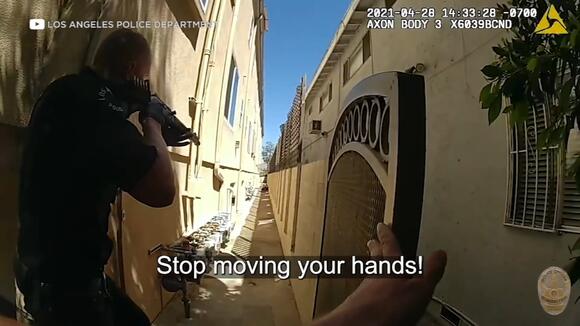 Warning: The footage in the above media player is graphic. Viewer discretion is advised. Authorities released a frantic 911 call and new body camera video Saturday of the aftermath of a gun battle between an off-duty Los Angeles police officer and an armed suspect in Van Nuys in April. The incident occurred around 2:30 p.m. on April 28 in the 5200 block of Vesper Avenue, where Los Angeles police officers responded to a call of shots fired. The video includes audio of a 911 call from a woman who was trying to help the wounded officer following the shooting. Footage shows officers discovering the suspect -- later identified as 24-year-old Christopher Carmarena-Quintanilla -- suffering from gunshot wounds in a breezeway on the side of the apartment. Suspect in custody after off-duty LAPD officer shot during gun battle, officials say

An off-duty Los Angeles police officer was shot Wednesday afternoon in Sherman Oaks, and a suspect is in custody, authorities said.

Los Angeles Fire personnel also found the suspect throwing the officer's handgun magazines over a fence. LAPD Chief Michel Moore said at the time of the incident that the gun battle happened when the off-duty officer left his apartment and went to a parking garage of the complex. The officer saw the suspect had broken into his vehicle and was wearing the officer's bulletproof vest and had stolen the officer's gun from his duty bag, which was stowed in the car, Moore said. The officer -- later identified as Mike Beyda, who was armed with a backup handgun -- confronted the man about the break-in. An altercation ensued, leading to the shootout, Moore said. The man fired at the officer, and the officer returned fire, Moore said. The gun battle led to the breezeway, where the man was shot in an arm and shoulder and fell to the ground. The officer retrieved the gun from the man and returned to his vehicle. He placed the weapons near his vehicle and collapsed with two gunshot wounds in his chest and one in his thigh, which he sustained during the shootout. Beyda and Carmarena-Quintanilla were taken local hospitals where they both received treatment for their injuries. Carmarena-Quintanilla was charged with attempted murder of a police officer, robbery, resisting a police officer and felon in possession of a firearm. An investigation is ongoing.

Another off duty LAPD incident involved a stressed out officers involving trouble. Fire the psychologists department throughout LAPD because that department continues to pass these flawed character individuals with uncontrollable behaviors.

Police say this man followed the 16-year-old victim before raping her in a Los Angeles-area parking lot. Now, investigators need your help finding him.
LOS ANGELES, CA・22 DAYS AGO
insideedition.com

A police sergeant in Indiana has been charged with two felonies after newly released officer bodycam video allegedly shows him stomping on a man's head. Eric Huxley, a 14-year veteran of the Indianapolis Metropolitan Police, has been charged with battery with moderate physical injury and official misconduct. These charges stem...
INDIANA STATE・2 DAYS AGO
CBS LA

LOS ANGELES (CBSLA) — A woman involved in a three-car crash was shot and killed Wednesday, just a few blocks from another shooting in South Los Angeles. (credit: CBS) The collision happened at the corner of Jefferson Boulevard and San Pedro just after 11 a.m. Three cars were apparently involved in the crash, and several bullet holes were seen in the windshield of a maroon car. “It just happened so quick, a car flew by me and crashed and then a second comes right behind and crashes,” said a male witness who did not want to be identified. He added that after that...
LOS ANGELES, CA・2 DAYS AGO
ABC7

A person was shot in South Los Angeles and then drove several blocks before being involved in a three-car crash at an intersection, where the wounded individual died, authorities said.
LOS ANGELES, CA・2 DAYS AGO

Suspect who shot Chicago cop in face said ‘you will die’ after opening fire, prosecutors say

A man on probation who shot a Chicago police officer in the face Monday told him "you will die" after opening fire at a strip mall, prosecutors said Tuesday. Jovan McPherson, 23, is charged with attempted murder, kidnapping and several other felonies in connection to the incident. At the time of the shooting, he was on probation in neighboring Kane County for drug possession and fleeing and eluding arrest, Fox affiliate, WFLD-TV reported.
CHICAGO, IL・3 DAYS AGO
ABCNY

Moussa Cisse had nothing to say as he walked out of the 32 Precinct - he was finally in handcuffs after 10 months on the run.
MANHATTAN, NY・11 HOURS AGO
Daily Voice

Harvey police said the suspects began shooting at the officer, who was on his way to work, in traffic.
HARVEY, IL・10 DAYS AGO
CBS LA

PALMDALE (CBSLA) – A suspected kidnapping and barricade situation involving a baby that began Wednesday evening at an apartment complex in Palmdale was still ongoing early Thursday morning, this after the suspect allegedly livestreamed a portion of the standoff on Instagram. Oct. 20, 2021. (CBSLA) The incident began in the 38000 block of 5th Street East at around 6:20 p.m. Wednesday. At one point, a male suspect surrendered to Los Angeles County Sheriff’s deputies, according to Sky2 reporter Desmond Shaw. However, a female suspect remained in the apartment and could be seen holding a baby as she stepped onto the balcony. The child is...
PALMDALE, CA・1 DAY AGO
fox7austin.com

The officer-involved shooting was captured on Officer Vargas’s body-worn camera. APD is also working on locating any other sources of video.
AUSTIN, TX・19 HOURS AGO
ABC7

"He wanted to do so much in life, but that was cut short," said Diego Ortega-Reza's brother. "So I'm just here speaking, hoping that this gets out to the public, someone knows something and speaks up."
LOS ANGELES COUNTY, CA・1 DAY AGO

Suspect In Deadly Harlem Shooting Arrested After 10 Months At Large

NEW YORK (CBSNewYork) — The NYPD has caught up with a murder suspect who had been a fugitive for the past 10 months. Detectives have been trying to track down 19-year-old Moussa Cisse, who allegedly killed a young mother and wounded her fiancé in Harlem in January. Detectives believe he may have fled to West Africa. Twenty-nine-year-old Shadina Smith was shot several times in the chest and later died. Her fiancé survived. Cisse is facing murder, attempted murder and several weapons charges.
NEW YORK CITY, NY・12 HOURS AGO
CBS Chicago

BRISTOL, Wis. (CBS) — A Kenosha County Sheriff’s deputy shot a suspect at a gas station in the village of Bristol, Wisconsin, on Thursday morning, after spotting a car that was involved in a homicide in Chicago, after he shot a police K-9, authorities said. The car the suspect was driving belonged to the victim of one of two murders on Chicago’s Northwest Side early Thursday morning, CBS 2 has learned. Kenosha County sheriff David Beth said around 11:15 a.m., 11:15 a.m., Kenosha County Sheriff’s deputies responded to the Benson Corners Shell gas station, at the corner of State Highway 50 and...
KENOSHA COUNTY, WI・1 DAY AGO
ABC7

One person was shot and wounded during an attempted robbery in a high-end business district of Beverly Hills.
BEVERLY HILLS, CA・3 DAYS AGO
news4sanantonio.com

SAN ANTONIO - The San Antonio Police Department released video Wednesday from an officer-involved shooting that happened back in August. SAPD was dispatched on August 13 at around 3:20 p.m. to a convenience store at Lakewood Drive and South WW White Road for a report of an armed man on a bike who had threatened to shoot a group of people.
SAN ANTONIO, TX・9 DAYS AGO

LAPD shoots armed man who barricaded himself in building with hostage

Police stormed a Los Angeles building Friday evening and shot a suspect in a dramatic hostage situation that was caught on camera. Videos posted to Twitter show police swarming a ten-story building in downtown LA where an armed suspect had barricaded themselves with a hostage, cops told The Los Angeles Times.
LOS ANGELES, CA・14 DAYS AGO
ABC7

Startling video that shows a Hemet police officer punch a suspect during a violent confrontation is raising a number of questions, but police say the footage doesn't tell the whole story.
HEMET, CA・3 DAYS AGO
wrtv.com

INDIANAPOLIS — The Indianapolis Metropolitan Police Department has released security camera video of a September 1 incident where two detectives shot and killed a man who had a gun inside an east side gas station. The shooting happened in the area of East 21st Street and North Ritter Avenue. IMPD...
INDIANAPOLIS, IN・14 DAYS AGO
fox29.com

PHILADELPHIA - Philadelphia police have released surveillance video in the shooting death of a man who was working on a gun violence prevention film when he was killed earlier this year. The shooting happened around 8 p.m. back on March 29, on the 1900 block of Page Street in North...
PHILADELPHIA, PA・3 DAYS AGO