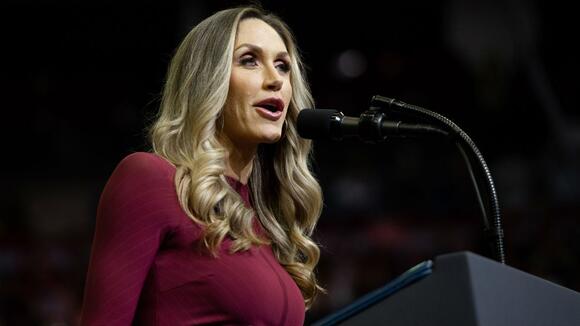 Lara Trump , the daughter-in-law of former President Trump , called on Americans living at the southern border to “arm up and get guns and be ready” in response to the influx of migrants arriving at the U.S. border.

“I don’t know what you tell the people that live at the southern border. I guess they better arm up and get guns and be ready, and maybe they’re gonna have to take matters into their own hands,” she said during an appearance on Fox’s “Justice with Judge Jeanine” on Saturday.

Her comments come on the heels of Vice President Harris’s trip to Guatemala and Mexico, which focused on the border.

Biden in March tapped Harris to lead the administration’s efforts to control the flow of migrants seeking entry to the U.S. at the southern border.

U.S. Customs and Border Protection (CBP) on Thursday said it encountered the highest number of people seeking to cross the U.S.-Mexico border this year in May, with 180,034 encounters.

That number was slightly up from the 178,854 encounters documented in April.

Lara Trump sparked outrage after she said many probably hope US Olympian Gwen Berry doesn’t make it to the podium in the hammer throw because the athlete and activist said she would use the global stage to take a stand for “oppressed people”. Athlete Gwen Berry has said that she would protest the US national anthem on the podium if given the chance. At the US track and field Olympic trials, Ms Berry turned away from the American flag. She advanced to the Olympic final on Sunday after facing calls from conservatives that she be banned from competing for...

Dan Patrick: Americans will die because of Biden's border policy

The number of children traveling alone who were picked up at the Mexican border by U.S. immigration authorities will likely hit a new high in July and-- in total--the number of families arriving at the border also likely reached its second-highest total on record, the Associated Press reported, citing a U.S. official with access to the preliminary data. Texas' Lt. Gov. Dan Patrick was on Fox News' "The Ingraham Angle" to discuss the border crisis and its radio silence in the media.

Biden calls for $100 payments for Americans to get vaccinated

“Throughout America’s vaccination efforts, we have seen that financial incentives serve as a motivating factor for some people to get vaccinated,” the White House said. The Biden administration said the incentives can be paid for with the $350 billion in aid granted to state, local, territorial and tribal governments under the American Rescue Plan Act.

Vaccinated family members from Europe are still barred from entering the United States, but President Joe Biden is still welcoming tens of thousands of unvaccinated illegal immigrants into the country every month. This incoherent, contradictory policy undermines both public health and the rule of law. And it will get innocent...

Republicans torched President Biden over a recent report that tens of thousands of migrants caught illegally crossing the border were released without court dates, the vast majority of whom haven't appeared at Immigration and Customs Enforcement (ICE) offices as directed. Axios reported on Tuesday that the Biden administration released 50,000...

H​ouse Republicans​ slammed President Biden and Democratic lawmakers for provoking the crisis at the southern US border — as the administration reportedly is prepared to roll back another of former President Donald Trump’s immigration policies, a move that the administration admits will exacerbate the problem. Republicans on the House Oversight...

Former Acting Director of U.S. Immigration and Customs Enforcement (ICE) Ron Vitiello argued on "Fox & Friends First" on Monday that the "root cause of the chaos" at the southern border is the reversal of former President Trump’s immigration policies. Vitiello made the comment one day before Homeland Security Secretary...

George P. Bush warns border crisis is 'not sustainable' as he sues Biden over wall, hits Dems for fleeing

Texas Land Commissioner George P. Bush on Tuesday warned that the border crisis is "not sustainable" as he explained how his office came to sue the Biden administration over its ending of wall construction, while also tearing into Texas Democrats for fleeing the state. "I can tell you this is...

House Republicans tee up border wall funding fight with Pelosi, calling it their 'hill to die on'

Retaining the House will be nearly impossible for Democrats; Trump will be the wildcard

All the bluster about controlling Federal levers of power by progressives hides a distinct nervousness. They know the window for pushing their policy agenda through Congress is about to slam shut in 2022. The rush to pass legislation and attacks on recalcitrant moderate Democrats are driven by the fear that this political opportunity may disappear for years.

Border Patrol Union president Brandon Judd joined "Your World" and offered insight into the border crisis, offering statistics that he believes America "needs to know." BRANDON JUDD: We're going to exceed 200,000 apprehensions in the month of July. 40% of those people were released into the United States to spread throughout our communities, a lot of whom very well could have COVID.

President Biden on Tuesday rebuked Republican governors who have imposed bans on mask mandates and pleaded with them to “get out of the way” of businesses and schools that want to impose coronavirus-related requirements. “We need leadership from everyone and if some governors aren’t willing to do the right thing...

The Biden administration will keep in place a Trump-era policy of turning migrants away at the southern border without allowing them to claim asylum due to the COVID-19 pandemic. The Centers for Disease Control and Prevention announced an extension of the policy in a statement on Monday, determining that "introduction...