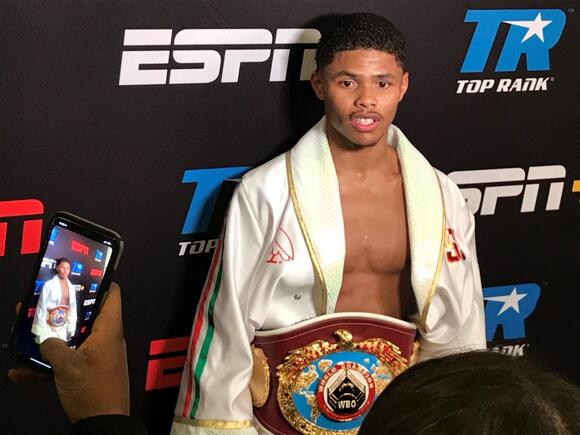 In his third fight since moving up to the super featherweight division, Shakur Stevenson left with a one-sided unanimous decision victory over Jeremia Nakathila in a WBO title eliminator. With the win, the 23-year-old improved his record to 16-0 with the win.

All three judges scored the fight 120-107 in Stevenson’s favor. The judges have not had him losing a single round in his last three fights and has only lost one of his last 43 rounds.

In October 2019, at just 22-years-old, Shakur Stevenson won his first world title defeating Joet Gonzalez to win the vacant WBO Featherweight title. Rather than opting to stay at featherweight and defend his newly won title, Stevenson instead vacated his title and moved up to super featherweight.

He had two fights in the super featherweight division prior to this bout against not well-known prospects winning each by 6th-round knockout and unanimous decision respectively.

Fighting out of Windhoek, Namibia in South Africa, Jeremia Nakathila came into the bout unbeaten record at 21-0 with 17 wins coming by knockout. This was his second fight not to take place in his native South Africa and his first in the United States.

From start to finish, Stevenson put on a dominant display of tactical boxing. Despite Nakathila having the reach advantage, Stevenson found his way inside mounting his offense against his opponent.

Stevenson frustrated Nakathila with his spectacular defense outlanding him 114-28 in the fight. Nakathila had four rounds in which he only landed one punch and only landed two jabs in 126 attempts all fight.

After having a potential knockdown ruled a slip in the 2nd round, Stevenson was able to score a knockdown in the 4th from a right hook in the corner.

Shakur Stevenson is now the mandatory challenger for WBO Super Featherweight champion Jamel Herring, who was in attendance for the bout. However, Stevenson expressed his desire to face unified champion Oscar Valdez.

“If I had the choice, I’d take Oscar Valdez, but if I have to beat up Jamel [Herring] to get to it, I’ll do that too. Jamel can’t beat me. He knows what it is.”

By Jeff Aronow: WBO super featherweight champion Jamel Herring vs. Shakur Stevenson is in the works for November 13th. Promoter Bob Arum told Dan Rafael of WBN they are closing in on a deal between the two fighters for that date. Arum has yet to determine the location of the fight.

Former world champion Chris Eubank has spoken on some tragic news that has come in his family and the boxing world today. Suddenly, his young son, Seb Eubank, has passed away. His father has spoken in an official statement saying the following:. Tragic news. Life is too short. Proof above...

Firas Zahabi recently opened up on UFC star Nate Diaz stating that he does not really lose fights, rather he just runs out of time. Diaz, who has record of 20-13 in MMA and 15-11 in UFC had previously showcased a great performance when he was able to pulloff an incredible comeback against Leon Edwards at UFC 263 earlier this month. Manny Pacquiao Reveals If Spence Fight Is Canceled.

Deontay Wilder's fitness has been called into question despite the American vowing to run over Tyson Fury like a "freight train" in their trilogy fight. Wilder is desparate to set the record straight on 24 July after losing his WBC heavyweight title in a crushing TKO defeat by Britain's Fury in February 2020.

By Sean Jones: Bernard Hopkins predicts a victory for Errol ‘The Truth’ Spence Jr over Manny Pacquiao for their fight on August 21st. B-Hop doesn’t view it as an easy fight for IBF/WBC welterweight champion Spence (27-0, 21 KOs) because Pacquiao is still fighting at a high level, even now at age 42.

Roy Jones Jr. Defends Himself Against Errol Spence Criticism: 'I Don’t Hate Nobody'

Roy Jones Jr. doesn’t understand why certain people accuse him of “hating on” welterweight champion Errol Spence Jr. In the past, the Hall of Fame boxer has criticized Spence, who holds the IBF and WBC welterweight belts, for not pushing harder for a showdown against WBO titleholder and rival Terence Crawford. But that does not stem from any personal bias against Spence, says Jones, who only wants to see the so-called best prove their case inside the ring.

Son of Kostya Tszyu, Tim Tszyu marched on in his professional boxing career once more today in Australia with another impressive performance at 154 lbs. Striking this time in the third round. Opponent Steve Spark got caught with a crunching body punch sequence in the end:. Great shot. Great finish.

Could Braun Strowman be making his way back to the WWE? The ‘Monster Among Men’ was one of the many shocking names released from the company this year. However, it appears that something could have changed in regarding Strowman’s status as it was recently revealed that WWEShop has released new merchandise for Strowman. This former champion showed up at tonight’s WWE Monday Night Raw.

By Dan Ambrose: Keith ‘One Time’ Thurman says Spence Jr needs to come to see him if he successfully defends his IBF/WBC welterweight titles against Manny Pacquiao on August 21st. It’s hard for former WBA/WBC 147lb champion Thurman to be taken seriously by Errol when he lost his last fight to Manny in 2019, and he hasn’t fought in two years.

Shawn Porter On Who Hits Harder Between Spence and Pacquiao

Next month’s epic fight of the summer between Errol Spence Jr. and Manny Pacquiao is not long away now. A throwback fight in the welterweight division between an emerging pound for pound champion and a former one. Pacquiao will be more than just the typical older lion against the younger...

Arguably the greatest to ever do it, the man they call Mike Tyson is not ruling out the possibility of a total upset when Manny Pacquiao challenges WBC, IBF welterweight champion Errol Spence on August 21 at the T-Mobile Arena in Las Vegas. Mike Tyson knows what he’s talking about, so I don’t think betting against him is wise…Mike Tyson Posts Floyd Mayweather ‘Racial Slur’ Video.

Errol Spence was a boxing fan like anyone else this weekend when it came to the big fight in Texas. Jermell Charlo fought to a split draw with Brian Castano. Many calling for a rematch already of the fight. It could be the most likely option but time will tell.

Light heavyweight “Zurdo” is coming, and he’s coming for Floyd Mayweather’s record. That’s a promise laid down by Golden Boy promoter Oscar De La Hoya. Recently hitting 42-0, Gilberto Ramirez – the former WBN Prospect of 2012, is on a mission to take what Mayweather prides himself on. When signing...

Freddie Roach didn’t hold back when he was asked on the The PBC Podcast to make a prediction for longtime protégé Manny Pacquiao’s pay-per-view fight against welterweight titleholder Errol Spence Jr. on Aug. 21 in Las Vegas:. Pacquiao by knockout. Roach respects Spence’s power but he believes the IBF and...

Freddie Roach, the long-time head coach of multiple-weight boxing champion Manny Pacquiao, has revealed he didn't want his fighter to face Errol Spence. Pacquiao will attempt to capture Spence's WBC and IBF welterweight titles when they fight on August 21 in Las Vegas while the vacant 'The Ring' welterweight title will also be on the line.

Oscar De La Hoya will make a long-awaited return to the boxing ring in September when he faces former UFC light heavyweight champion Vitor Belfort in a historic bout. The fight, between 48-year-old De Lay Hoya and 44-year-old Belfort - is set to be a sanctioned professional contest, taking place at Staples Center, Los Angeles over eight two-minute rounds at 180lb.

HOLLYWOOD, CALIFORNIA (July 12, 2021) — Would you buy a used car from the World Boxing Association (WBA)?. In a period of 12 months, from July 15, 2018 – July 20, 2019, eight-division world champion and boxer laureate Senator Manny “Pacman” Pacquiao lit up the welterweight division by knocking out WBA regular welterweight champion Lucas Matthysse, successfully defending that title against former four-division world champion Adrien Broner (world-rated No. 6 by the WBA when they fought in January 2019), and solidifying his hold on the division by tagging then undefeated WBA welterweight Super Champion Keith Thurman with his first loss while becoming the oldest fighter, at age 40, to win a welterweight title. A few months later, the world shut down as it battled the Covid-19 pandemic.

Former welterweight titleholder Keith Thurman jumped on Instagram Live to chat with fans about the upcoming showdown between Manny Pacquiao vs Errol Spence. Thurman says he’s noticed Pacquiao slowing down in some of his recent training videos and says Spence should have enough to beat the Filipino legend at this point in his career.

With the WBO pulling a surprise last week by ordering welterweight titlist Terence Crawford to make a mandatory defense next against former two-time world titleholder Shawn Porter it appears as though Crawford will finally get a chance to fight a top opponent in the division and that Porter will get another high profile fight he has wanted.