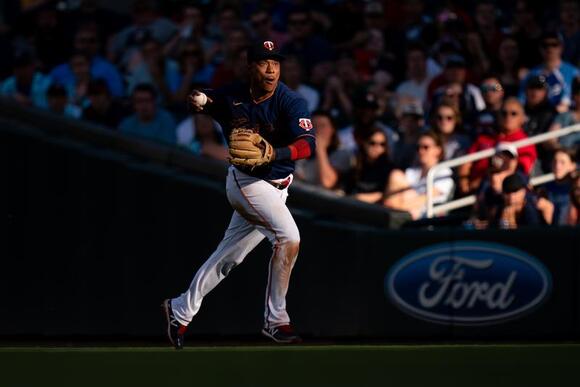 Jorge Polanco went 3-for-4 with a homer and three RBIs and Jose Berrios picked up his seventh win of the season as the Minnesota Twins defeated the Houston Astros, 5-2, on Saturday night in Minneapolis.

Berrios (7-2) held the Astros to three singles over the first six innings and allowed two runs on five hits over seven innings. He walked one and struck out eight. Taylor Rogers struck out two while pitching a 1-2-3 ninth to earn his sixth save.

It was the third homer in his last three games for Polanco. Miguel Sano added an RBI double for the Twins.

Kyle Tucker and Robel Garcia each homered for Houston.

Luis Garcia (5-4), who had won five consecutive starts for the Astros, suffered the loss after allowing four runs (three earned) on six hits over 4 1/3 innings. It marked the first time in 18 career outings that Garcia, who had allowed a total of three runs over 19 innings in his three previous starts, had allowed more than three runs.

Minnesota took a 1-0 lead in the fourth inning when Trevor Larnach singled with two outs and then scored on Sano’s double high off the wall in right-center.

The Twins extended the lead to 4-0 in the fifth. Nick Gordon started the inning with a strikeout but reached safely on a passed ball by Martin Maldonado. Gordon later stole second and then scored on the first career double by Ben Rortvedt. Polanco followed with his ninth homer of the season, a 425-foot drive off the front of the second deck in right-center.

Houston cut it to 4-2 in the seventh on back-to-back homers by Tucker, his 12th of the season into the bullpen in left-center, and Robel Garcia, his first in an Astros uniform.

The Twins made it in 5-2 in the bottom of the seventh when Andrelton Simmons led off with a double, was sacrificed to third by Rortvedt and scored on a single by Polanco.

NY Mets: SNY proposes a deal to acquire Jose Berrios from the Twins

SNY loves their images with trade proposals to land a big player. One of the latest they shared has the New York Mets targeting pitcher Jose Berrios of the Minnesota Twins. Berrios has been speculated about for weeks and the Twins don’t seem eager to deal him for anything short of a king’s ransom. Controllable for another year and young, Minnesota is doing the wise thing and asking for a lot in return for this unnecessary trade chip.

At 40-55, the Minnesota Twins are poised to be sellers at the MLB trade deadline. Outfielder Byron Buxton is a

The Minnesota Twins want a major-league player and a minor-league prospect in a potential trade involving right-handed starter Jose Berrios, reports MLB Network's Jon Heyman. While the asking price could come down closer to the trade deadline, the present fee is reportedly considered very high and has rival clubs doubting Berrios will be moved.

Aaron Judge and the New York Yankees are on the verge of sweeping the Houston Astros in their ongoing three-game series in H-Town after the former defeated the latter in the first two contests. As if the series needed anything more to spice it all up, Judge seemed to troll Jose Altuve in the Astros during the Yankees’ 1-0 win in Game 2 on Saturday. That then drew an intriguing reaction from Houston manager Dusty Baker.

During every game he plays, Carlos Correa tucks a list of the opposing lineup inside his cap. Astros bench coach Joe Espada assigns each man a running grade using baseball’s 20-80 scouting scale. Correa checks the paper prior to each plate appearance. Before each pitch, he peeks toward the catcher behind home plate. His positioning depends on it.

For Astros' Jose Altuve, an improbable decade and a dream come true

The Astros turned away 16-year-old Jose Altuve from a tryout and told him he was too short. Fifteen years later, he is the face of their franchise, forming a Hall of Fame case and now among the sport’s longest-tenured players. Altuve reached 10 years of major league service time on...

Kenta Maeda might never wear short socks again. The righthander took the mound for the Twins looking to sustain momentum after his previous start Sunday at Kansas City, the first appearance of the high socks. It was his strongest outing of the season, as he struck out 10 batters in six scoreless innings.

HOUSTON — Jose Altuve got the Yankees again. The Yankees finished off the first half of the season with a disastrous 8-7 loss at Minute Maid Park, as Domingo German and Chad Green blew a five-run lead in the ninth, with Altuve finishing it with a game-winning three-run homer — while Aroldis Chapman sat in the bullpen.

July 12 (UPI) -- Jose Altuve jumped on a 1-1 curveball and sent it over the left field fence for a 368-foot, three-run walk-off homer to lead the Houston Astros to a dramatic victory and prevent a series sweep by the New York Yankees. Altuve's round-tripper came in the bottom...

Peralta scheduled to start for Detroit against Berrios and the Twins

MINNEAPOLIS (AP) — Andrew Heaney found his groove, retiring the last 11 batters he faced. The left-hander rediscovered his belief in his own ability, too. Jack Mayfield hit a three-run homer and Heaney finished seven innings for his longest start of the season, leading the Los Angeles Angels past Minnesota 3-2 on Thursday night after the Twins traded away All-Star slugger Nelson Cruz.

Astros' Jose Altuve has the best approach to dealing with haters

Throughout his baseball career, Jose Altuve has dealt with his share of doubters. Even when the Astros signed him as a 16-year-old in Venezuela, it came with just $15,000 and only after Astros scouts had told him to go home because he was too small. Even as the 5-foot-6 hitting machine continuously had success in the minor leagues, he never was considered a top prospect because of his size. All he did was keep hitting and so far has a Most Valuable Player Award, three batting titles, seven All-Star Game selections and a championship.

CHICAGO — The Twins won a game they probably shouldn't have, then lost a game they had all but won. Gilberto Celestine made a rookie mistake that turned out to be a good thing, Jose Berrios made a bad pitch that turned a win into a loss, and the Twins split a doubleheader Monday with a 3-2 win and a 5-3 defeat at Guaranteed Rate Park.

Next up in the trade deadline series is one of the more underrated young pitchers in the game in Jose Berrios. He may not really be available, but he probably shouldn’t have been, anyway, since the Twins were expected by some to represent the American League in the World Series this year. Oops.

Altuve went 2-for-4 with a home run, a double, two RBI and an additional run scored in Wednesday's 5-4 loss to Cleveland. After homering twice Tuesday, Altuve stayed hot delivering another pair of extra-base hits Wednesday, including a solo shot off Eli Morgan in the fourth inning. He's still batting just .220 over his last 10 games, although he has six home runs since July 1. The 31-year-old is slashing .278/.358/.512, leading the team with 23 long balls and 70 runs scored in 394 plate appearances. Altuve remains a significant power threat, though his speed has diminished with just four steals in 2021 thus far.

The App is Back! Don’t forget to download the NBC Sports EDGE app to receive real-time player news, mobile alerts and track your favorite players. Plus, now you can check out articles and player cards. Get it here!. Jose Berrios O/U 6.5 Strikeouts vs. Tigers. Redemption. The first meeting between...

The Astros didn’t let Aaron Judge’s troll of Jose Altuve go without a response— getting the last laugh in emphatic fashion. After hitting a walk-off home run to beat the Yankees 8-7 on Sunday at Minute Maid Park, Altuve was the last one standing — with his shirt off, a scene he didn’t allow to happen when he hit another walk-off homer to sink the Yankees in the 2019 ALCS, which led many to speculate he was wearing a buzzer.

The Minnesota Twins may shop two-time All-Star Jose Berrios, but he won’t come at a cheap price. As we creep closer to the July 30 trade deadline, rumors will pick up speed on which players may or may not be on the move. Among the biggest names involved in those discussions will be Twins starter Jose Berrios.

Mariners Rumors: Trading with the Twins for Jose Berrios and Nelson Cruz

The Mariners have had a better first half than anyone could’ve imagined given the circumstances of the injuries they have suffered this season. Just 3.5 games back of Oakland at the all-star break, they have a record of 48-43 and seem like they could legitimately make that turn into “buyer status”.