NYPD: Mother Throws 4-Week-Old Daughter, 2-Year-Old Son Out Window Before Jumping Out Herself 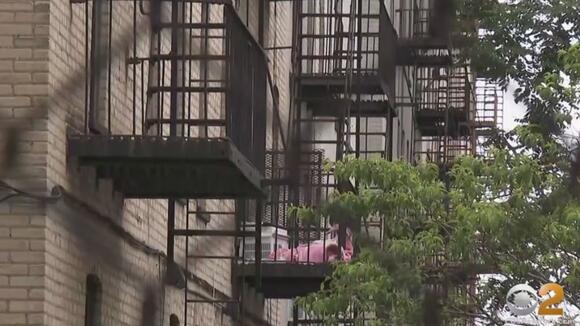 NEW YORK (CBSNewYork) — Police say a mother threw her two young children, including a newborn, out of a second-story window in Brooklyn on Saturday morning.

Neighbors at the Brownsville apartment building on Rockaway Parkway told CBS2’s Kiran Dhillon the woman and her kids had only lived there a short while before Saturday’s horrifying incident.

The aftermath of the frightening incident was caught on cell phone video.

Paramedics can be seen tending to two small children just moments after police say their 24-year-old mother Dejhanay Jarrell tossed them out of a second-floor window.

Neighbor Carl Chin lives behind the alley of 178 Rockaway Parkway.

“We heard crying and then we heard a thump,” he said.

He says after hearing noises around 11 a.m., he looked outside to see two children, a 4-week-old baby girl and 2-year-old boy on the pavement. Their naked mother was standing on the fire escape above.

“She was standing over the ledge, and she just jumped straight down,” Chin said.

Desperate to help, Chin called 911 and, barefoot, jumped a railing to get to Jarrell, who he says was still hurting the baby.

“She gripped the baby tight, so I kind of struggled with her to get the baby away from her,” he said.

Chin eventually got the baby girl into his own arms.

“She even thanked me and told me to take care of her daughter,” Chin said. “She was basically tired of being alone and not getting enough sleep.”

Jarrell and both children were taken to a local hospital.

“To see that is horrific, and I just did what any decent person would have done in that situation. I just reacted,” he said.

His sister-in-law Shandie Harrison, who was also there, agrees.

They say the mom did not seem to be in her right mind.

“She was asking for help. She asked my brother-in-law to take care of the baby … I hope she gets the best help she can. You know, a family member try to reach out to her and people are in the surrounding. She needs help,” Harrison said.

The 2-year-old boy and his mother suffered non-life-threatening injuries.

Police say what lead to the incident is unclear, but mental illness may have been a factor.

Video shows a man get out of a red vehicle, pick the boy up, and carry him into the car while the other suspect sat in the front passenger's seat.

A New York mother foiled an attempted kidnapping this week after she managed to pull her 5-year-old boy out of an abductor’s car window seconds before it sped away. The youngster was snatched by a 24-year-old man off the sidewalk at 117-02 Hillside Avenue in the Richmond Hill section of Queens around 8 p.m. on Thursday, according to the New York City Police Department.

Oklahoma police arrested a woman after her 12-year-old daughter gave birth – and the family welcomed the child’s rapist to a baby shower. Tulsa police said mom Desiree Castaneda and other family members knew about the victim’s relationship with 24-year-old Juan Miranda-Jara, who was reportedly surprised when he was arrested July 14 as he accompanied the 12-year-old to the hospital where she delivered.

RICHMOND HILL, Queens — A quick-thinking mother was able to rescue her child during an attempted abduction Thursday night in Queens, according to police. It happened around 9:30 p.m. in Richmond Hill, near the corner of Myrtle and Hillside avenues, an NYPD spokesperson said. A man got out of a...

SEE IT: Queens Mom Drags 5-Year-Old Son Out of the Clutches of Would-Be Kidnappers

A Queens mother saved her 5-year-old son from a kidnapping on Thursday, pulling the boy through a car window and out of the hands of two men who tried to snatch him. Surveillance video shows Dolores Diaz Lopez walking along Hillside Avenue in Richmond Hill at about 8 p.m., on their way to visit her husband at work, ABC 7 reported.

A woman in Egypt was arrested Thursday for allegedly killing her 2-week-old baby by throwing her into a water tank to please her husband who did not want a girl child. The incident occurred in Abu Al Matamir town in the Nile Delta in Egypt. Authorities said a health inspector raised concerns about the death of the infant, who had already been buried after her mother claimed she died of natural causes, the Gulf News reported. The Abu Al Matamir police station then contacted the El Beheira Security Department over the issue.

COLUMBUS, Ohio - An Ohio mother is in custody after she allegedly shot her 5-year-old son in the knees while she was intoxicated, according to a July 16 police report. Trenise Turner, 30, was lying with her son on the couch while allegedly intoxicated in a residence on the 1000 block of Seymore Ave. the evening of the incident, according to police.

A group of teens jumped a 44-year-old man who was out walking his dog in Middle Village Friday night. Dozens of teenagers were setting off fireworks and yelling at the corner of 75th Street and Juniper Boulevard North, near Juniper Valley Park when the man — reportedly an off-duty firefighter — confronted them about the noise just before 10 p.m.

NASHVILLE, Tenn. (WKRN) – An Antioch woman is encouraging her neighbors to be on high alert after her son came face to face with a burglar in their home. According to Metro police, officers responded to a break-in at the Boyd family home Wednesday night. The intruder was able to get inside after a man broke the back window.

BUFFALO, NY (WIVB) — A Buffalo mother is speaking publicly for the first time since her young son died of a bullet wound to the head in a case that has still not resulted in charges. Three-year-old Shaquelle Walker Junior was sitting on a bicycle watching fireworks with relatives on...

Lauderhill, FLA (WFOR) — A Lauderhill, Florida, mother has been charged in the deaths of her two daughters whose bodies were found floating in a canal last month. Detectives arrested 36-year-old Tinessa Hogan on Tuesday night. She was named a person of interest in the case shortly after the bodies were discovered on June 22nd, 2021.

A Sept. 10 preliminary hearing date was confirmed today for a registered sex offender accused of throwing his 1-year-old daughter off a cliff in the mountains south of the Coachella Valley, and also attacking the child's mother and a good Samaritan. Adam Slater, 50, of Palm Desert was arrested May 7, 2020, in connection with The post Preliminary hearing set for man accused of throwing one year-old daughter off cliff appeared first on KESQ.

NEW YORK (CBSNewYork) — The search continues for the suspect police say punched and kicked a 68-year-old man Saturday in Brooklyn, leaving him with a broken nose and wrist. The brutal attack was caught on video shortly after 9 a.m. near Pitkin Avenue and Barbey Street in East New York. (Credit: NYPD) Police said the suspect was riding a Citi Bike when he came across the victim and tried to rob him. Initial video showed the suspect whaling on the man, who eventually goes limp. The suspect then steals his cellphone and necklace before taking off. Newly released video shows the suspect at a subway...

Toddler is shot and wounded; mother and her 14-year-old son are arrested

A mother and her 14-year-old son were arrested on various charges after the son, apparently accidentally, shot his young half-sibling in the right upper leg, and the wounded toddler was not immediately taken to a hospital, according to the San Bernardino Police Department. The incident took place while the mother,...

VIDEO: He tries to kidnap a 5-year-old boy in the middle of the street, but his mother avoids him by taking him out of a window of the attacker’s car

A woman prevented her five-year-old son from being kidnapped by pulling him out of a car window on Thursday after a man grabbed the little boy on a street in Queens (New York, USA). In footage of the incident, released by the New York Police Department, a woman can be...

‘Smoke pouring out of the walls’: Southgate family says 4-year-old daughter saved them from fire

SOUTHGATE, Mich. – A Southgate couple said their 4-year-old daughter saved them from a fire by waking them up in the middle of the night. When they parents woke up they saw smoke and realized the house was on fire. They believe if they were asleep for a few more minutes they may not have survived.

She doesn’t call him “dad” anymore and her last memory of Brandon Edwards is the moment when he snatched her brother from her arms. This Monday the Dallas man’s trial for capital murder resumed and it was his daughter’s testimony that revived the terrible moments that ended her brother’s life, as The Dallas Morning News reports.

An Oklahoma father has pleaded guilty to felony child neglect over the deaths last year of his two young children, who perished in the back of his broiling truck while he napped for more than five hours, authorities said. Dustin Dennis pleaded guilty Tuesday in connection with the June 2020...

NEW YORK (CBSNewYork) — Queens prosecutors are searching for an accused drunk driver who was arrested for killing a Lyft driver but jumped bail. The victim’s grief-stricken wife is pleading with the suspect to turn himself in. Kulsama Jahan Baby, of Borough Park, Brooklyn, sat in mourning at the Morganville, New Jersey, grave of her beloved husband, Mohammed Hossain. She prays the drunk driver accused of killing him back in June will turn himself in. “He just took everything away in an instant. Please just come forward, please,” Baby said. Police say just before 4 a.m. on Sunday, June 13, 47-year-old Hossain was taking home...