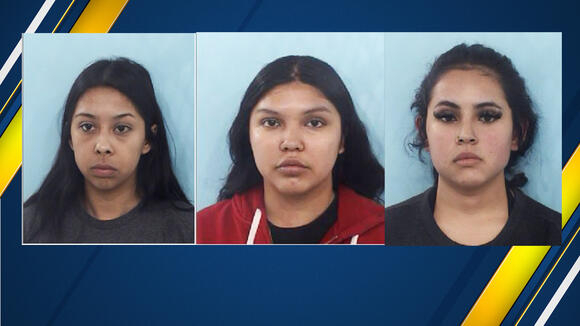 Tulare police have arrested three young women, including a teenager, in connection with a murder that happened last week. On June 5 just after 2 am, a victim was found in a car with gunshot wounds near North West St. and West Prosperity Ave. The victim, later identified as Nalen Peterson, died at the scene. RELATED: Victim dies after being found in car in Tulare with gunshot wounds Tulare police began investigating the incident as a homicide and appealed for help from the public to find the killers. On Friday, June 11, investigators arrested 19-year-old Stephanie Esqueda, of San Diego, 20-year-old Jacquelyn Hernandez of Tulare, and 21-year-old Alyssa Soto of Tulare. They say they are still looking for a fourth suspect who was also involved. This is the fourth homicide of the year in Tulare. Last year, there were a total of five homicides in all of 2020.

Fresno County Sheriff's deputies received reports of the shooting in the area of Dakota and Cornelia just after 1 am on Saturday.

Fresno police are at the scene of a deadly shooting that happened in the area of Bardell and Calwa around 6:15 pm on Saturday.

Homicide detectives are on scene investigating a deadly shooting in southeast Fresno.

Three suspects are in custody in connection with a shooting in Visalia, and one of the two victims has died.

Woman hit and killed on Highway 99 in Fresno area

An alleged drunk driver hit and killed a woman while she was running across a busy highway in the Fresno area.

California Highway Patrol officers are searching for the driver who hit and killed a woman in Fresno County.

Action News has acquired new video from a deadly Fresno police shooting that resulted in a lawsuit from the family who called officers to the scene.

The crash happened in the area of Avenue 368 and Road 52 around 3:30 pm on Saturday afternoon.

A woman has died after police say she was the victim of a hit and run in central Fresno Thursday night.

The Tulare County Sheriff's Office is asking for help identifying a person who was found dead in Earlimart last week.

Madera police received reports of a man running into lanes of traffic near Pecan and Madera Avenues around 10 on Friday night.

The search is on for the suspect who shot a 25-year-old Fresno mother on Tuesday, leaving her gravely injured. Investigators believe she was not the intended target.

'My mom did not deserve this': Family pleads for help finding deadly hit-and-run driver

Margarita Linares, 87, had ten children, including two daughters who tell Action News their mother was a friend to everyone.

Pedestrian hit and killed by driver in Porterville

Porterville police are investigating after a pedestrian was hit and killed by a car on Thursday morning.

Law enforcement officers followed her into Fresno. The pursuit ended at Fulton Street near Highway 180, where the suspect was taken into custody.

Investigators say one man suffered life-threatening injuries, and another was seriously injured.

The body of a man who drowned at Pine Flat Lake was recovered Wednesday, nearly two weeks after he went missing in the water.

Joseph Jimenez, 20, was arrested Tuesday night by Corona police and booked for murder, attempted murder and robbery. Authorities say it appeared to be an unprovoked attack.