Toddler falls from home window, mauled to death by family's 2 pit bulls when he lands 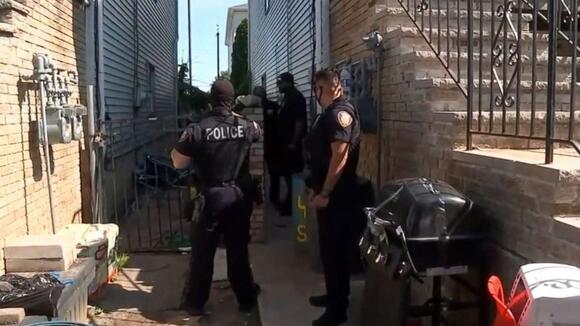 A 3-year-old boy has died after falling out of a window at his family home and being mauled to death by the family's two pit bulls when he landed in the backyard.

The incident occurred at approximately 5:30 p.m. on Thursday in Elizabeth, New Jersey -- about 6 miles south of Newark -- when police say the boy somehow managed to fall out of a window, landed in the backyard of the family home and was subsequently and savagely attacked by the family's two dogs, according to New York City ABC station WABC .

Neighbors say that the mother immediately reacted and went to rescue her son but that it was a horrendous scene as she tried to pull the dogs off of the little boy.

"I saw the mother, she was full of blood in her hands, her shirt," neighbor Maria Rocha told WABC in an interview after the attack. "And I was like, 'what happened?' so I came here because it was full of police and she told me, 'My baby, my baby, I went to the bathroom and my baby fell out the window.'"

The little boy was rushed to Trinitas Regional Medical Center, where he was pronounced dead shortly after 6:30 p.m., according to WABC .

Acting Union County Prosecutor Lyndsay Ruotolo, Elizabeth Police Chief Giacomo Sacca and Police Director Earl Graves said the circumstances are under investigation no charges have been filed at this point.

Witnesses interviewed by WABC said that the dogs were quite aggressive and that the yard that the boy fell into was full of dog feces, motorcycles, power tools and debris.

"Whenever I would pass by the dogs would always bark," another neighbor, Angela Perez, told WABC. "You could tell they were aggressive."

Animal control responded to the scene after the ordeal, secured the dogs and transported them to another location.

MORE: Man lucky to be alive after being found stuck inside farm equipment for 2 days

Neighbors say they are in shock over the tragic death of the 3-year-old boy.

"I went to the uncle and he said the dogs got to his neck and then I pushed the baby out of the [way of] the dogs and still the dogs were [holding] his legs," Rocha described to WABC. "They killed the boy right then and there."

MORE: Hunter fatally shot after being mistaken for a deer by another hunter

Authorities are still investigating the incident and are urging anybody with any information pertaining to this case to contact Prosecutor's Office Detective Richard Acosta at 908-347-0404 or Detective Michael Tambini at 908-472-4301.