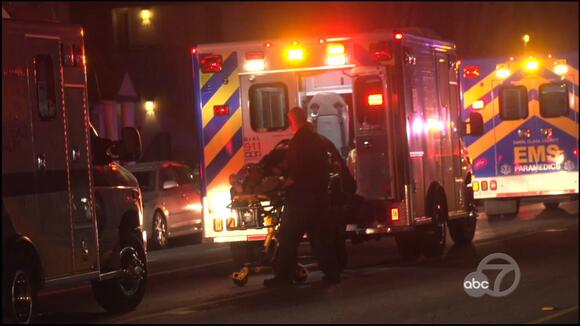 One person was killed and two others were injured Friday night after a truck crashed into the outdoor dining area of a San Jose restaurant, according to police. It happened at the Agave Sports Bar in the 500 block of West Alma Avenue. Police say one of the victims was transported to the hospital in critical condition but later died from their injuries. According to a tweet from SJPD, the driver has been arrested for possibly driving under the influence. Stay with ABC7 News for the latest details on this developing story.

"Timothy Hamano's actions have been inflicted inconsolable heartbreak upon our family that we will never fully recover from," Turnage's partner Angie Brey said through her tears.

The Nevada County Sheriff's Office said all those aboard the Bombardier CL 600 died when it crashed Monday in a heavily wooded area near the Ponderosa Golf Course in Truckee, near the Northern California border with Nevada.

Body cameras for officers have already hit the streets, as one city councilmember is proposing another initiative to tackle crime in town.

The fire broke out just after 4 p.m. Tuesday in the Mill River Lane neighborhood near Tasman Drive and Cisco Way.

LIVE: Residents advised to shelter in place due to fire burning near San Jose-Milpitas border

The San Jose Fire Department tweeted it's advising residents to shelter in place as crews work to knock down the fire.

1 dead, 1 injured in shooting on Highway 4 in Concord, CHP says

The California Highway Patrol is investigating a shooting a highway shooting in Concord Saturday night that left one dead and another injured.

Police say the violence unfolded around 10:30 p.m. Friday night near a nightclub on Fourth Street where a concert was happening but it's unclear what prompted the shooting.

'Pretty low to steal from kids': $8,000 worth of P.E. equipment stolen from Milpitas middle school

The P.E. program serves 700 students at Rancho Milpitas, kids who will soon be returning to full-time, in-person classes for the first time since March 2020

"That's what superheroes look like": Paramedics from Oakland whom were assigned to the Dixie Fire burning in Northern California saved a boy's life at their hotel.

Richmond police believe a body found in San Pablo Bay may be teen who went missing in February.