Motorcyclist killed in crash during suspected race on Highway 168 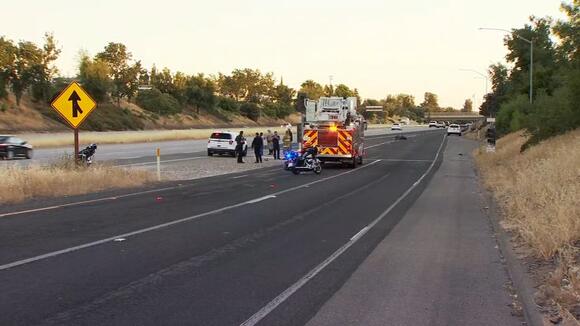 A motorcyclist has died after a crash in Clovis Friday night. The California Highway Patrol says it happened around 7:30 pm on Highway 168 near Bullard Ave. Officers say Fresno resident Phillip Lam, 27, was traveling west on the highway towards Bullard when he appeared to be racing another car and going about 90 mph. For an unknown reason, he swerved to the right and collided with a concrete curb. Lam was ejected from the motorcycle and died at the scene. Officers added that they do not know what happened to the other car involved.

California Highway Patrol officers are searching for the driver who hit and killed a woman in Fresno County.

The California Highway Patrol said the 26-year-old driver of a Kia was traveling west on Jensen when he ran a red light, colliding with an SUV.

A woman has died after police say she was the victim of a hit and run in central Fresno Thursday night.

Three suspects are in custody in connection with a shooting in Visalia, and one of the two victims has died.

A man has been hospitalized after a suspected road rage shooting in northwest Fresno Thursday afternoon.

Pedestrian hit and killed by driver in Porterville

Porterville police are investigating after a pedestrian was hit and killed by a car on Thursday morning.

'My mom did not deserve this': Family pleads for help finding deadly hit-and-run driver

Margarita Linares, 87, had ten children, including two daughters who tell Action News their mother was a friend to everyone.

One person in critical condition after shooting in east central Fresno, police say

One person is in critical condition after a shooting in east central Fresno Thursday night.

A truck driver was rescued after being pinned in a big rig that overturned in Merced County on Wednesday.

Traffic is backed up in northeast Fresno after a crash involving multiple vehicles, police say.

Investigators say one man suffered life-threatening injuries, and another was seriously injured.

One of the lanes of Highway 99 in Tulare County has been cleared after a big rig overturned blocking the roadway.

Flames break out at van, taco shop in central Fresno

A suspected arsonist has been detained after flames ignited a van and part of a taco shop in central Fresno.

The body of a man who drowned at Pine Flat Lake was recovered Wednesday, nearly two weeks after he went missing in the water.

65-year-old woman hit and killed by driver in Merced

A 65-year-old woman died at a hospital after being hit by a car in Merced on Wednesday morning.

Friends said 19-year-old Fabian Castellanos was a jokester who lit up the room and who would always help when he could.

Investigators also say 23-year-old Kong Vang tried to disguise the truck by spray painting the damaged area and removing some of the parts.

The California Highway Patrol has closed some southbound lanes of State Route 99 after a semi-truck crashed in Fresno County.

Action News has acquired new video from a deadly Fresno police shooting that resulted in a lawsuit from the family who called officers to the scene.

The search is on for the suspect who shot a 25-year-old Fresno mother on Tuesday, leaving her gravely injured. Investigators believe she was not the intended target.