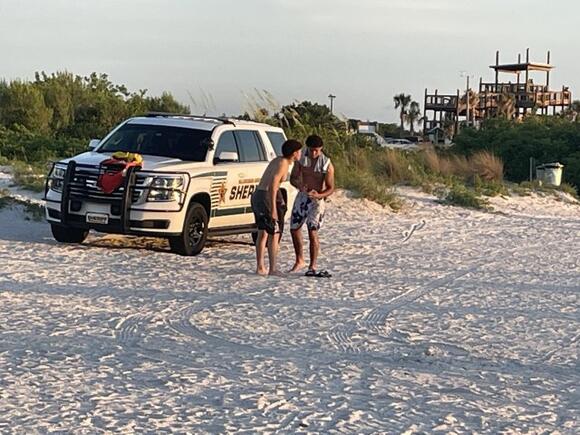 We now know the names of the father and son who drown near Apollo Beach Friday night.

U.S.C.G. confirms Janosh Purackal, 37, and Daniel Purackal, 3, were pronounced dead after being recovered from the water.

Another man who tried to help is still missing. His name is Kristoff Murray and rescue crews are calling him an Apollo Beach hero, after his wife reported he ran into the water to try to help the man and child, according to the Hillsborough County Sheriff’s Office.

“Saw the adult and child were struggling and immediately, without hesitation, jumped in the water to try to save the both of them. We’re calling him not just a Good Samaritan but our Apollo beach hero,” said Sheriff Chad Chronister.

The sheriff said the adult and toddler, were reported wading in the water when the current took them. The Apollo Beach Hero was revealed to be 27-year-old Kristoff Murray by his wife Tjonique Gray.

Tjonique and the rest of Kristoff's family spent most of Saturday out at the Apollo Beach Nature Preserve just hoping for the best.

“I’ve been here since 7 a.m., and nothing, just sitting in the hot sun waiting on somebody to tell us something," said Gray.

The Coast Guard pulled back their search efforts, but FWC and deputies with HCSO's Marine Unit conducted a search in the area of Surfside Boulevard, using a grid to search by air and water.

The sheriff described the water with a strong current and heavy chop. While he said chances of survival may be slim, they are continuing to search for the hero.

The Coast Guard has pulled back their search efforts, but FWC and HCSO continue searching for Kristoff.

A woman was found shot and killed in a vehicle near Woodlawn Memorial Gardens in St Petersburg.

PALM HARBOR, FLA.- — The Florida Fish and Wildlife Conservation Commission received a report regarding two injured deer in a Palm Harbor neighborhood on Thursday. State wildlife officers responded to the Lansbrook Community in Palm Harbor on Thursday, July 29. Neighbors took photos of the deer injured by a bow...

Ollie couldn’t wait to get back in Stephen Foster’s arms and overload him with her slobbery kisses.

A block down the street sits a charred and hallowed out shell of a truck so vital to their operation. They used it to transport food and supplies to their second location in temple Terrace. Wednesday, it went up in flames.

USF police are asking for tips to help identify the suspect who stole WWE property back in May.

Polk Sheriff searching for man accused of killing his girlfriend

The Polk sheriff says an Auburndale woman was found dead in her home Monday, July 26 and the prime suspect is her boyfriend of more than 20-years.

CLEARWATER, Fla. — Surprise! After a seahorse was brought to Clearwater Marine Aquarium for treatment, he surprised staff a few days later by giving birth to hundreds of babies. On Friday, July 23, a Good Samaritan came across a seahorse that was floating in the surf and brought it to...

A man who was on death row for kidnapping, raping and killing 11-year-old Carlie Brucia in Sarasota in 2004 died in custody, according to State Attorney Ed Brodsky.

When motorists are required to stop for school buses in Fla.

The start of the new school year means buses will be back on the roads carrying very precious cargo, but some motorists still break laws when it comes to sharing the road — and the consequences can be deadly.

The I-Team has learned there have been dozens of other reported incidents in the past five years of that model handgun firing without anyone pulling the trigger.

Pinellas County has halted red tide clean-up efforts because they say the fish kill is minimal enough for city crews to handle along the beaches.