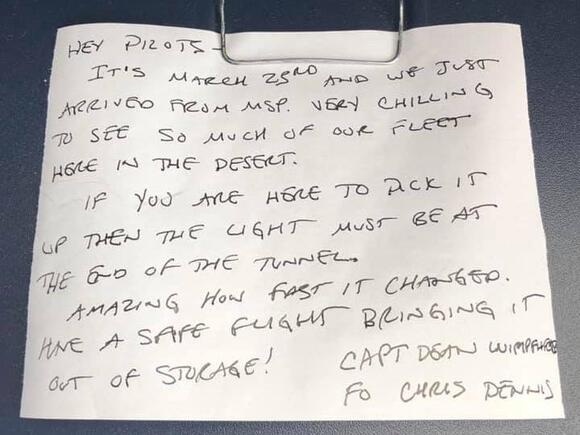 As the world starts to creep back to normality after more than a year of life defined by uncertainty and tragedy, one Delta pilot discovered an early-pandemic artifact offering a flash of prior hope and proof of resilience.

Delta First Officer Nick P. arrived at the Victorville Airport in Southern California earlier this month, ready to start the "wake up" process on ship 3009 after it spent more than a year out of commission due to the COVID-19 pandemic, according to a Delta Facebook post.

As he went through his checklist to awaken the aircraft, Nick found a letter "tucked away" on a tray table in the flight deck, the post said.

The handwritten note was dated March 23, 2020 - more than 400 days earlier - and had been left by a fellow first officer, Chris D.

As the virus rapidly took hold of the world in March 2020, forcing airlines to cancel flights and halting many forms of travel, Chris had flown ship 3009 from Minneapolis to Victorville to wait among a fleet of Delta planes parked in the California desert.

"Feeling the weight of the moment, he wrote a note for the pilot who would do the return-to-service flight and left it on the parked plane," Delta's post said.

In his brief letter, Chris captured the early anxiety and uncertainty that had afflicted the world as the coronavirus took hold.

"Very chilling to see so much of our fleet here in the desert," he wrote.

But even at the onset of the pandemic, Chris predicted a reprieve would come.

"If you are here to pick it up then the light must be at the end of the tunnel," he wrote. "Amazing how fast it changed."

The letter concludes by wishing his fellow pilot a safe flight bringing the plane out of storage.

"While the world certainly has changed over the past year, one thing is for certain: we won't be taking that open runway for granted anytime soon," Delta wrote.

American Airlines will suspend flights at the Fort Smith Regional Airport from Aug. 21 to Sept. 5 as the airport repaves its main runway. This will leave the airport temporarily without a major air carrier. Delta Air Lines suspended flights to Atlanta in June 2020 with plans to resume flights last September. Delta, however, has yet to resume flights at the Fort Smith airport.

American Airlines Group Inc. and Southwest Airlines Co. are carrying extra jet fuel on some flights and considering adding stops to other routes to pick up fuel as snarls in U.S. trucking and supply chains delay deliveries to small and mid-sized airports across the country. The delays are expected to...

Why Did United Airlines Fly A Brand New Boeing 737 MAX 8 To Oshkosh?

United Airlines flew a brand new Boeing 737 MAX 8 to Oshkosh, Wisconsin, on Monday. The airline does not service Oshkosh, and to the nearby commercial airport it serves (Appleton), it flies in regional jets. This special flight, carrying yours truly, members of United’s leadership and team members, and United’s partners in pilot training, the aircraft arrived in Oshkosh at the EAA AirVenture show, where United highlighted its continued commitment to pilot training and working to highlight the various pathways to enter a career in the aviation industry.

Pilot lands small plane on US 95 northwest of Las Vegas,

A pilot landed a small plane Wednesday morning on U.S. Highway 95 in the far northwest Las Vegas Valley, forcing closure of the highway in both directions, officials said. Las Vegas Fire Department crews were called at about 9:10 a.m. to U.S. 95 near Lee Canyon Road, according to dispatch records. Department spokesman Tim Szymanski said the plane did not crash, but the pilot landed on the highway and was out of the plane “walking around.”

A United Airlines flight was evacuated ahead of take-off at San Francisco International Airport on Thursday after a teenager sent a picture of an Airsoft gun to other passengers onboard via Airdrop, an iPhone feature that allows sharing between other Apple Inc. products. KNTV reported as the flight bound for...

ATLANTA - Atlanta-based Delta Air Lines says business is soaring post-lockdown, but now the company needs to hire thousands of workers to keep up with demand. In a letter posted on the company's website, CEO Ed Bastian says Delta will be hiring more than 5,000 people across the business to help ease some of the challenges caused by the demand.

This week I had my first experience applying American Airlines Executive Platinum status benefits to a flight operated by Alaska Airlines and it included a super early complimentary upgrade to First Class. Reciprocal benefits between American AAdvantage & Alaska Mileage plan (including upgrades for top tier elites) were announced in...

Airlines cite concerns about fuel shortages at some airports

FORT WORTH, Texas (AP) — The fuel needle is moving closer to “empty” at some U.S. airports. That's according to American Airlines, which is asking pilots to take steps to save fuel. American is reporting low fuel levels at “several” small to midsize airports, mostly because of a shortage of...

Lufthansa Cargo has had to cut between 3% and 5% of its freighter flights after a temporary agreement with pilots ended. The carrier said Asian destinations were particularly affected, citing Shanghai, Beijing, Hong Kong, Chengdu, Incheon, Chennai and Tashkent, while there have also been fewer frequencies to Brazil (Sao Paulo and Recife).

Pilot Lands Small Plane On I-10 In Florida’s Panhandle

MIAMI (CBSMiami/AP) – The pilot of a small plane who ran out of fuel made an emergency landing on I-10 in the state’s panhandle. No one was injured when the plane landed on the highway’s shoulder around 7:30 p.m. Sunday outside of Milton, which is near Pensacola. Witnesses told troopers...

A student pilot flying solo in a Cessna lost engine power WHILE in the air . . . and pulled off a successful emergency landing in a field. It was captured on cockpit video and you can also hear the entire conversation between him and the tower.

A plane spotter who alerted an airbase to a jet "malfunction" averted a potential disaster, its pilot said. Ian Simpson called RAF Lakenheath after seeing flames and sparks come out of Maj Grant Thompson's F-15E Strike Eagle on take-off. Photographer Mr Simpson regularly watches jets take off from the United...

CAUGHT ON CAMERA: Delta forces 23-year-old blonde off flight for fighting, spitting and no face mask

A 23-year-old Florida woman told police they were disrespecting her “human rights” as they removed her from a Delta Air Lines flight last week for refusing to wear a mask. Flight attendants said Adelaide Schrowang fought with them and spit on other passengers, and she’s seen in a passenger-shot video telling police officers they’re “not healing” situation by arresting her.

Except the plane is a rocket w/o wings, no pilot on board, if anything goes

Wrong the capsule holding the people gets jettisoned away from the engine & comes down by parachute. Yep, just like a plane. Won’t be long before Amazon is flying us all everywhere & grandma will be jettisoned out of an Amazon rocket plane and dropping in our backyards by an individual parachute for her Christmas visit. Dress warm grandma!