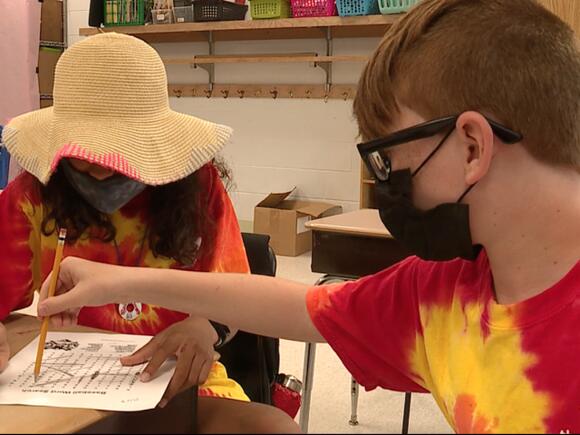 YMCA of Greater Kansas City is operating its SPARK program from three locations this summer – Kansas City, Kansas; Linwood and Red Bridge Elementary School. The academic summer camps aim to help students catch up after falling behind during remote learning.

The SPARK program has been offered to families in need for seven years through grants. But Program Director Royccie Jackson said the need and demand for this kind of academic camp spiked due to the COVID-19 pandemic.

There currently is a waiting list of students who want to be enrolled, after all 60 openings were filled.

Rachelle Hamrick, Red Bridge Elementary School principal, hand-picked the students who needed the most help at the end of the school year. Parents hope to prevent the “summer slide,” which often refers to the decline in academic skills during summer months.

“I got three boys,” father Christ Bohatyritz said. “When we moved to all virtual, it was very challenging for my sons. My middle son was actually failing in remote, and now that we’re back in school, he’s got an A.”

Bohatyritz said it was a sigh of relief to receive help from the SPARK staff. He decided staying home was easier than juggling his new business during a pandemic. And as his children get back in the swing of academics, he hopes he can get back on his feet as well.

Licensed teachers are in the classrooms Monday through Thursday and build their own curriculums around reading, writing, physical activity and play. Jackson said that, year after year, she sees how important this is.

Jackson recalled having to make the choice between emotional well-being and academics in her own house, too.

“We went from almost straight ‘A’ student to ‘D’ here, ‘C’ there,” Jackson said. “It was very difficult to watch her struggle.”

Senior District Program Director Savannah Standifer said the YMCA was intentional about serving the families of the school district. Oftentimes, the families in the area struggle with the economics of the community and their ability to access quality programs.

Jackson said it is a breath of fresh air for many parents.

“They were just trying to see if they can keep their jobs and keep their children safe," Jackson said.

A recent Horace Mann report found 97% of K-12 teachers surveyed saw learning loss among their students. As families look for ways to fill educational gaps, tutoring services are seeing a major spike in demand this summer.

A Kansas City-based carnival company called Evans Midland Empire Shows is back in business after a year of quarantine. President Andrew Evans said the entire family is excited to open its doors again and continue the family business of bringing smiles to the community.

The Kansas City area is sending four spellers to compete in the 2021 Scripps National Spelling Bee. In this 2021 Spelling Bee profile, we spoke with Garrett Li of Olathe.

It's not clear how many refugees in the Kansas City area are vaccinated against COVID-19. However, one local group is working to get refugees vaccinated and is reporting success.

A Kansas City nonprofit is launching a new program to help ease the transition for foster children when they first go to a new home.

A new program at the Johnson County, Kansas, Museum aims to include more sensory-friendly activities for children who have autism and have sensitivities to light, images and sound.

Several local spellers are set to compete in the virtual rounds of the Scripps National Spelling Bee.

The Kansas City area is sending four spellers to compete in the 2021 Scripps National Spelling Bee. In this 2021 Spelling Bee profile, we spoke with Drew Clawson of Gladstone.

GrantWatch has seen an increasing number of grants available through its service during the COVID-19 pandemic.

KANSAS CITY, Kan. — Kansas City, Kansas Public Schools announced Monday that for the remainder of the 2020-2021 school year, it will continue to require the use of masks for all students and staff. The district said masks will be required both indoor and outdoor settings, including all activities through...

SHAWNEE, Kan. — It won't be long now before the school year is out for many kids in the Kansas City area, however, big changes are coming Monday for some of our largest school districts. Many have chosen to roll back their mask mandates. The Lee's Summit School District sent...

KCKPS to continue requiring masks for class, activities through July

KANSAS CITY, Kan. — As other districts in the area consider stripping mask mandates for the last few weeks of class, the Kansas City, Kansas School District is doubling down with its current guidelines. The district said in a tweet Monday that for the remainder of the academic school year,...

For individuals first getting the COVID-19 vaccine, the range of emotions typically involve jubilation, relief and a sense of hope that things are returning to normal. But when bleary-eyed teenagers are the ones getting the shots, the prevailing attitude is much more nonchalant. "I barely felt it," said Ainslee Bolejack,...