By Clea Skopeliti
Posted by
The Independent
10 days ago 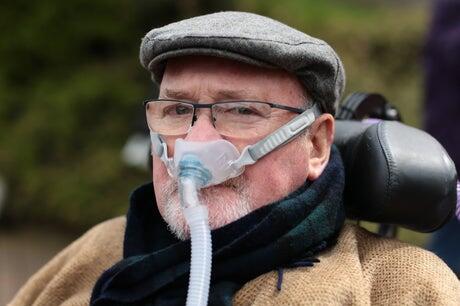 Assisted dying campaigner Noel Conway has died at the age of 71 after removing his ventilator.

Mr Conway, who had motor neurone disease (MND), died on Wednesday at his home in Shropshire.

In a statement released by campaign organisation Dignity in Dying following his death, Mr Conway said that he had made “a conscious and deliberate effort” to die after his quality of life “dipped into the negative”.

He said: “When you read this I will be dead. Not because I have suffered a tragic accident or died suffering from a long-standing or painful disease.

“No, it will be because I have made a conscious and deliberate effort to end my own life. I suffer from MND and was diagnosed over six years ago knowing that at some stage I would reach a point when my muscles would have deteriorated to such an extent that I could not function effectively.

“Over the past two months it has become increasingly evident to me that the balance of fulfilment in life, or if you like, my quality of life, has dipped into the negative... My voice has depleted to the extent that many people cannot now tell what I say and my eyesight recently deteriorated.

“I’m already a paraplegic and I cannot use my hands or fingers but I am aware that my neck muscles are weakening as are my mouth and speech muscles. I recognise that the time has come to take the decision now to do something about this.”

The retired lecturer, who was diagnosed with motor neurone disease in 2014 and said he felt “entombed” by his illness, lost his appeal against the UK’s ban on assisted dying in 2018.

After losing his legal challenge, Mr Conway urged MPs to make assisted suicide legal. He said: “Dying people like me cannot wait years for another case to be heard. All I want is the option to die peacefully, with dignity, on my own terms, and I know that the majority of the public are behind me. It is downright cruel to continue to deny me and other terminally ill people this right.

In his statement this week, he said he recognised that it may take him up to eight hours to die after removing his ventilator, which he said was “far removed” from the “swift” end-of-life process as practiced in countries such as Switzerland.

His wife, Mrs Conway said, that although he had been “in control” of his death, the “uncertainty” over how long it would take led to them experiencing “considerable anxiety”. She said his carers “ensured Noel had a painless and dignified death, demonstrating empathy and concern for us all”.

Mrs Conway said: ”Ultimately, Noel wanted the choice of an assisted death, and I hope his campaigning will bring this option closer to becoming a reality for other terminally ill people in this country.”

Sarah Wootton, chief executive of Dignity in Dying, said: “Noel will be sorely missed by all of us at Dignity in Dying and we extend our sincere condolences to Carol, their family and friends.

“We are indebted to Noel, an inimitable and award-winning campaigner who helped put assisted dying firmly on the political agenda in this country.

“Noel fought in the courts, lobbied parliamentarians and spoke powerfully to the media about his suffering under the UK’s blanket ban on assisted dying, all the while knowing any change would most likely come too late for him.

“Noel will be remembered as a loving husband, father, grandfather, friend, lecturer, mentor and for playing an instrumental role in bringing us closer to having a safe, compassionate assisted dying law in this country.”

The UK’s longest-known Covid-19 hospital patient has died after choosing to withdraw from treatment because he could not “live like this anymore”.Jason Kelk, 49, spent the past 14-and-a-half months in treatment after he was admitted to St James’ Hospital in Leeds in March 2020.He was transferred to the nearby St Gemma’s Hospice, where he spent his final hours surrounded by his family on Friday.His wife Sue Kelk wrote on Facebook: “It is with a very heavy heart that I have to share the sad news that Jason passed away peacefully at St Gemma’s at 12:40pm today.”Ms Kelk said her husband...

Terminally ill campaigner Noel Conway, who mounted a legal challenge to the ban on assisted dying in the UK, has died at the age of 71. Campaign group Dignity in Dying said Mr Conway died on Wednesday at his home in Garmston, Shropshire, after making a decision to remove his ventilator with the support of his family and a local hospice.

A paralysed man who challenged the law which criminalises assisted suicide has died, aged 65. Paul Lamb was severely injured in a car crash in 1990 and was left with no function from the neck down aside from limited movement in his right arm. Mr Lamb, from Leeds, had lived...

The UK’s longest-known coronavirus inpatient has died after he decided to withdraw from treatment, his wife said. Jason Kelk, 49, contracted coronavirus in March 2020 and had spent more than a year in intensive care at St James’ Hospital in Leeds. He had been transferred to a hospice on Friday...

Growing up in foster homes after being put into care aged four, Tasha Clegg couldn’t wait to get a place of her own. When she was just 17, she was offered a flat through her council and she was keen to move in as soon as possible. “I needed to...

A leading figure in Britain’s anti-vaccination movement who repeatedly spread coronavirus conspiracy theories, and once called the NHS “the new Auschwitz”, has been permanently struck off the Nursing and Midwifery Council (NMC) register.Kate Shemirani, a mother-of-four from Nottingham, had been banned from practising as a nurse under an 18-month interim suspension, imposed last July.But last Friday the NMC Fitness to Practise Committee issued her with a permanent striking-off order, under which she cannot practise as a registered nurse for at least another five years – after which point she will be eligible to appeal the decision.In its ruling, the...

A doctor who prescribed anti-psychotic medication that contributed to the death of a teenager with autism is being investigated by the General Medical Council.Dr Monica Mohan prescribed Olanzapine to 18-year-old Oliver McGowan against his own and his parents’ wishes at Southmead Hospital in Bristol in November 2016.A letter to the family from the medical watchdog the GMC has revealed it has opened an investigation into the consultant.Oliver, who was fit and healthy but had epilepsy and learning difficulties, died after the drug triggered a reaction called neuroleptic malignant syndrome. It caused his temperature to rise and his brain to swell...

A mum who had her womb removed “unnecessarily” after medics failed to spot her cervical cancer with a smear test has said she has the “broken body of an elderly woman” and is unlikely to work again. Nikita Nicholls, 33, who has three children, told i she suffered a “catalogue...

A second “mutilated” patient left with life-changing injuries after botched hospital surgery has described how she was left in urine-soaked bed sheets for days by nurses who called her lazy when she was unable to get out of bed.Lucy Wilson told The Independent she believes she would have been better looked after at a veterinary practice compared to the level of care she received from nurses at Norfolk and Norwich Hospital Trust in January last year.She was one of three patients harmed by surgeon Camilo Valero in the same week and almost died after Dr Valero and other staff...

A woman died after a former security guard at a hospital in Pakistan posed as a doctor and performed surgery on her, police have said. Shameema Begum, 80, died on Sunday, two weeks after Muhammad Waheed Butt attempted to treat her back wound at a public hospital in the eastern city of Lahore.

Up to 8,750 people died after catching Covid-19 in hospital

Health secretary Matt Hancock claimed on Thursday that “everybody got the Covid treatment that they needed” and that he had never been advised people were not receiving care.But an official national report into the impact of coronavirus on maternity services last year did make clear that in at least one woman’s case she was twice denied intensive care when her doctors believed she needed it, because of a lack of beds.During the pandemic NHS England officials have also repeatedly made the claim that no one was denied an intensive care bed.But in August last year, The Independent reported on an...

Doctors are being urged to look out for signs of stroke in people receiving the Oxford/AstraZeneca vaccine after a young woman in her 30s suffered a blood clot and died.Another woman in her 30s and a man in his 40s suffered clots in their large arteries, but experts have stressed the chances of developing side effects after a vaccine are still rare.A team from medical organisations including the National Hospital for Neurology and Neurosurgery at University College London (UCL) Hospitals NHS Foundation Trust warned doctors should look out for patients with ischaemic stroke within about one month of vaccination.An ischaemic...

It took months for Charlotte Wright to accept what killed her husband. His passing was sudden and unexpected, the causes desperately unclear at the time. After appearing to have suffered a stroke, Dr Stephen Wright was rushed to hospital in the early hours of 26 January. Later that day, at 6.33pm, time of death was called.

Five-month-old baby becomes first person in UK to be treated with £1.8m-per-dose drug

A five-month-old baby with a spinal disorder has become the first patient in England treated with a potentially life-saving drug on the NHS. Arthur Morgan was diagnosed with spinal muscular atrophy (SMA) earlier this month. The infant received one-off US gene therapy Zolgensma at Evelina London Children's Hospital on 25 May.

Encouraging figures show the number of vaccinated people becoming seriously ill or dying from the Indian variant after being vaccinated is very low. Public Health England says that two people who had received both jabs died after contracting the variant. Last night 12 people had died after 5,599 known infections...

A mum-of-five has told how she felt she was dying with Covid-19 and warned people the virus is still "very real". Donna Binns, 40, said she felt like her "chest was being crushed" and like she had been "poisoned" while in hospital with the Delta variant of coronavirus. She has...

An award-winning BBC radio presenter died in hospital after suffering blood clots after she received the AstraZeneca vaccine, her devastated family has said. Lisa Shaw, who worked for BBC Newcastle, developed “severe” headaches a week after having the jab and fell seriously ill a few days later, relatives said in a statement.

A woman has claimed to have suffered 14 anaphylactic shocks to the Covid-19 vaccine - but says she still wants people to go and get the jab. Mum-of-one Kirsty Hext, 26, says she has been left fighting for her life after a shocking allergic reaction to the vaccination. She was...