By Mike Martin
Posted by
HuskyMaven
13 days ago 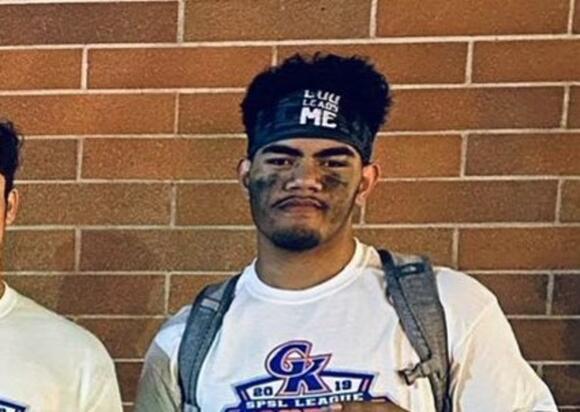 On Friday morning, University of Washington football coach Jimmy Lake sent out his signature Twitter message "Woof," signifying that a player had just committed to the Huskies.

In fact, the last three commitments received by Lake and his staff have been to offensive linemen. Others are Scottsdale, Arizona, center Parker Brailsford, who committed in the middle of May, followed by O'Dea High School's Mark Nabou, who started off June with his pledge.

With just a small amount of film to go on, given the short spring football season, Ioane impressed UW recruiters.

"When all of Sports Illustrated All-American's evaluation is completed for the players, I expect that he will be an All-American candidate," said Trevor Mueller, Husky Maven high school recruiting analyst.

Mueller said Ioane moves well for someone who carries a 6-foot-4, 320-pound frame.

"He has the size to be a road-grating offensive lineman, but he's also quick enough to defend against the quicker edge-rush defenders," Mueller said. "He is well-coached, between his time with Heir Football and G-P."

At last month's game between Ford Sports Performance and Heir Football, Ioane looked the part of a D-1 lineman.

"His size sticks out, even up against some of the best the state has to offer," said Mueller. "He's an important piece of the offensive recruiting class as a whole, but also for putting a fence around the state for the Huskies."

In his commitment video on Instagram, Ioane thanked his teammates, coaches and his family.

"With hard work and dedication comes success," he said. "I'm ready to take this next step in my life."

Ioane helped G-P to an undefeated season in the 4A South Puget Sound League. He anchored the line on an balanced offensive attack that averaged 441 yards of offense and 32 points per game in the five-game, league-only season.

All anyone wanted to talk about during a month of University of Washington spring football practices were the outside linebackers. They made big plays and big news, both glad and sad. Laiatu Latu had to give up the game. Coach Jimmy Lake opened camp by detailing how a neck injury...

For the longest time, Andre DeSaussure was like an incomplete pass. He looked impressive coming off someone's fingertips in a tight spiral, but nobody could haul him in. A quarter of century ago, he blew through the University of Washington football program as this talented yet fun-loving wide receiver who did well as a freshman and a senior, but went unused in between.

In a game fraught with newness all around, a near totally revamped University of Washington basketball team will open Pac-12 play next season on the road against Arizona and its recently hired coach Tommy Lloyd, the former Gonzaga assistant. The two sides will meet in Tucson on Thursday, December 2,...

Broadcast times for five University of Washington football games have been revealed, by the Pac-12 Conference and at least three of them involve night games. The Huskies will open the season on September 4 at home against Montana in a game that will kick off at 5 p.m. on Pac-12 Networks.

J.T. Tuimoloau, considered one of the class of 2021's top two or three college football recruits, has said all along he wanted to see each potential destination for him before making a selection. Like the relentless edge rusher that he is advertised, Tuimoloau has not wavered from that personal game...

UW Roster Review, No. 2-99: Turner Has Been Good, Needs to Be Better

Asa Turner has all the size and experience at strong safety to be a great college football player. It's time for him to show it. After two seasons at the University of Washington, the 6-foot-3, 210-pounder started half a season as a true freshman and the short four-game pandemic schedule as a sophomore.

On the eve of a late-starting Pac-12 football season, a forlorn University of Washington coach Jimmy Lake spoke to his virtual audience of media members before him and announced that Taj Davis had opted out. A 6-foot-1, 200-pound wide receiver, Davis chose to stay home in Chino, California, for personal...

The University of Washington football team is seeking a return to prominence, trying be more like its 2016 CFP version or its 2017 or 2018 New Year's Day bowl game qualifiers. All along, it's just needed a little more muscle. According to polling done by Athlon Sports (full disclosure, I've...

UW Roster Review, No. 2-99: Racanelli Made People Notice Him in Spring Football

In the middle of a month of University of Washington spring football practices, Jimmy Lake sat behind a table and a microphone, and he answered a question with a challenge. Asked who among his 100-plus players stood out, the Husky coach offered an initial response that seemed to imply the media types before him weren't paying close enough attention.

Jacob Eason hasn't been in a game situation, not even a regular practice routine, for nearly a year and a half. Such has been the football fate for the University of Washington quarterback turned Indianapolis Colts' fourth-round draft pick throughout the lengthy global pandemic. He was an inactive roster presence,...

As NFL Beckons, Joe Tryon Is Never Far From His Family

Joe Tryon hadn't been drafted for more than a few minutes, as a late first-round pick for the Super Bowl champion Tampa Bay Buccaneers, when he was asked to join a Zoom call with Florida media members. Before the conversation was over, and a lot of football questions had been...

University of Washington running backs accepted handoffs, sometimes four simultaneously, with ball carriers in constant motion as the Huskies sought to ramp up spring-practice repetitions. When it came time to narrow the competition, Cameron Davis more often emerged from the backfield jumble as the No. 1 rusher for scrimmages among...

They wear custom-made football equipment in many instances, typically eat for two people at the team training table and weigh two times more than a lot of their teammates. These are the Pac-12 Conference Giants. Man Mountains. The biggest collection of gridiron girth the league has to offer. Ulumoo Ale...

Joe Tryon, from suburban Hazen High School and the University of Washington and someone who was greatly under-estimated as a college football recruit, recently became a No. 1 NFL draft pick. Sav'ell Smalls, a swashbuckling sort entering his second season with the Huskies after building a huge following while at...

On a day when college football reopened its recruiting doors for the first time since March 2020, removing all pandemic restrictions, the University of Washington football program got immediate results, landing a top prospect in its own backyard. Long thought to be favoring the Huskies, O'Dea High School's Mark Nabou,...

Usually you can tell the difference right away. The football player isn't nearly as physically defined as the others. He's a step slower. And he wears some really obscure jersey number. This aptly describes the typical University of Washington walk-on, the non-scholarship guy, of which there are many who annually...

UW Roster Review, No. 2-99: With Hampton In, Huskies Book Some Down Time

Dominique Hampton pulls off his shiny gold helmet while reaching for a cup of water at a University of Washington spring football practice, revealing a large earring in the form of a cross. Which makes sense because playing in the Husky secondary is sort of like embracing religion. In Hampton's...

In a sure sign that the sports world is returning to normal, the University of Washington men's varsity eight on Saturday captured the Intercollegiate Rowing Association national championship for the 19th time, holding off California on Mercer Lake in West Windsor, New Jersey. Rain came down hard throughout the competition...

How Many Football Games Will UW Win This Season?

Most, but not all, signs point to a highly successful University of Washington football season. In its post spring-practice rankings, ESPN pegged the Huskies as the nation's No. 15 football team, which sounds about right. The Sporting News, however, couldn't find a spot for the UW in its recently compiled...

UW Roster Review, No. 2-99: Pleasant Dreams Would be to Start Again

Kamari Pleasant wiled away much of University of Washington spring football practice hearing how much better sophomore Cameron Davis and junior Richard Newton had become as running backs. He watched as fellow sixth-year senior Sean McGrew addressed the media on behalf of all the Husky runners. He likely rolled his...