By Reuters Staff
Posted by
Reuters
5 days ago 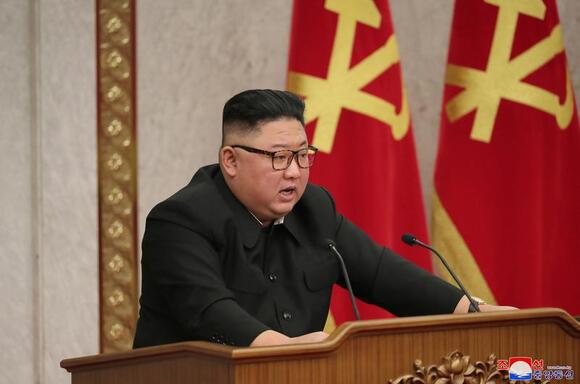 The meeting on Friday called for a “high-alert posture” against the “recent fast-changing” situation on the Korean Peninsula, said KCNA, adding that it also addressed organizational issue of dismissing, transferring and newly appointing some military officers.

Kim discussed “important tasks” to make “a fresh turn in the overall work of national defence,” KCNA said without elaborating on details.

North Korea’s plenary meeting of the ruling party’s Central Committee is planned for later in June.

Christopher Ahn is worried about Kim Jong Un putting a target on his back. "The court has recognized that there is a danger to my life and to those around me if I leave this country. Quite frankly, they've told me that that danger is here, in the United States and that that danger exponentially increases if I leave the country," Ahn told Fox News.

While President Joe Biden and South Korean President Moon Jae-in met in Washington on Friday, reports surfaced that North Korean leader Kim Jong-un is concerned about another perceived threat to his regime - skinny pants and mullets. Kim allegedly fears examples of "decadent" Western influence among North Korean youth because he believes it could lead to a negative opinion of the country's government. Jeans have reportedly been banned from North Korea for years, and pictures of "approved" hairstyles have circulated as well.

Seoul [South Korea], June 3 (ANI): In a major change to North Korea's ruling party, Kim Jong Un has a new second-in-command, according to excerpts of a government document seen by CNN. The position was created in January as part of a revision to the rules of the Workers' Party...

North Korean leader Kim Jong Un made his first public appearance in about a month, with state media showing him at a Party meeting that discussed ways to improve the country’s deteriorating economy. Kim, wearing his signature black Mao suit, said it was time to take “additional state measures for...

This article was originally published by Radio Free Asia and is reprinted with permission. Government officials in North Korea are living in fear after a series of executions of their colleagues on the orders of leader Kim Jong Un’s powerful sister, Kim Yo Jong, two officials told RFA. Since her...

Why Kim Jong-un is waging war on slang, jeans and foreign films

North Korea has recently introduced a sweeping new law which seeks to stamp out any kind of foreign influence - harshly punishing anyone caught with foreign films, clothing or even using slang. But why?. Yoon Mi-so says she was 11 when she first saw a man executed for being caught...

SEOUL, South Korea — (AP) — North Korean leader Kim Jong Un has vowed an “uncompromising struggle” against anti-socialist elements at home, state media reported Thursday, as he tries to fortify his power amid pandemic-related difficulties and U.S.-led economic sanctions. The comments by Kim, the third member of his family...

Kim Jong Un has admitted that North Korea's food situation is "tense", state media reported Wednesday, sounding the alarm in a country that suffered a devastating famine in the 1990s in which hundreds of thousands died. The impoverished country, which is under multiple sets of international sanctions over its nuclear...

How Did North Korea Get Its Hands on U.S.-Made Attack Helicopters?

New images suggesting Kim Jong-un has recently shed several pounds have sparked fresh speculation about the health of the autocratic leader who retains an iron grip over nuclear-capable North Korea. Kim, whose hefty physique has long prompted debate about chronic diseases that could impair his ability to lead, was a...

WASHINGTON — President Joe Biden on Friday rejected his predecessor's approach to North Korea and said his goal as president was to achieve a "total denuclearization" of the Korean Peninsula. Speaking at a joint press conference with South Korean President Moon Jae-in, Biden used the example of former President Donald...

This Picture Might Be How North Korea Starts a War

The May tests of at least one apparently nuclear-capable short-range missile startled foreign observers and threatened to elevate tensions between the United States and its allies South Korea and Japan on one side and, on the other side, North Korea and its main patron China.

SEOUL, South Korea — The health of North Korean leader Kim Jong Un has long been a source of morbid fascination in rival South Korea, which sits in the shadow of Mr. Kim’s 1.2-million-strong army and his growing arsenal of nuclear-armed missiles. Has he gained even more weight? Is he...

The head of the United Nations’ atomic watchdog is warning Monday that North Korea’s nuclear activities remain "a cause for serious concern" as there are signs it might be reprocessing spent reactor fuel to extract plutonium – an ingredient that could be used for weapons. International Atomic Energy Agency Director...

South Korean Prime Minister Kim Boo-geum on Tuesday, on the background of the 21st anniversary of the first inter-Korean summit, called on Pyongyang to return to dialogue with Seoul, Yonhap news agency reports. “I sincerely ask you to return to the table of dialogue and reconciliation so that the hours...

Artillery has remained a focus for North Korea, and in recent years the country has unveiled newly developed artillery pieces.

North Korea could have 40 to 50 nuclear weapons, think tank says

June 14 (UPI) -- North Korea continues to develop weapons of mass destruction and the regime is believed to have increased its nuclear arsenal, according to a Swedish think tank. The Stockholm International Peace Research Institute said in an annual report published Monday that Pyongyang is one of nine nuclear-armed...

What Keeps Joe Biden Up At Night: A U.S. Invasion of North Korea

Worth risking millions of lives?

SEOUL (Reuters) - North Korean leader Kim Jong Un convened a meeting of senior officials of the Workers' Party to evaluate and improve the economy in the second half of the year, state media KCNA reported on Tuesday. Kim is seeking a greater role in government to lift up an...