By TERRY SPENCER
Posted by
WHIO Dayton
5 days ago 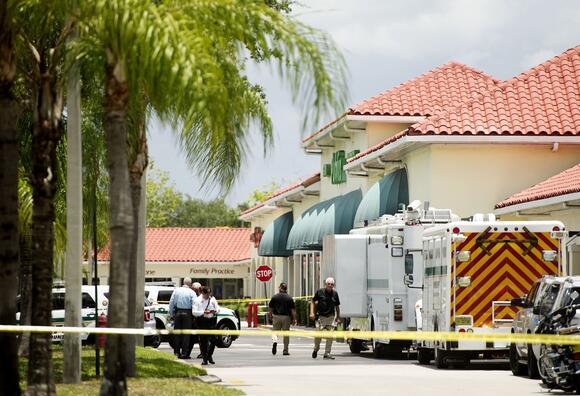 FORT LAUDERDALE, Fla. — (AP) — The gunman who stalked and then fatally shot a grandmother and her 1-year-old grandson inside a Florida supermarket had been threatening to kill people, including children, on his Facebook page but no one reported him, a Florida sheriff said Friday.

Timothy J. Wall, 55, had been making the threats for some time before he walked into a Publix in Royal Palm Beach on Thursday, stalked his victims in the produce aisle before first shooting the child and then the woman before killing himself, Palm Beach County Sheriff Ric Bradshaw and his detectives said. Detectives have found no connection between Wall and the woman.

“He has said, ‘I want to kill people and children.' He's got friends. Obviously, they saw that. His ex-wife said that he has been acting strange. He thinks he is being followed. He's paranoid. Do you think a damn soul told us about that? No,” Bradshaw said at a press conference. “If it sounds like I'm angry, I am.”

Under Florida's so-called Red Flag Law, a law enforcement agency can seek an order from a judge to seize the firearms of anyone shown to be a danger to themselves or others and hold them for a year. That can be extended if an agency shows the person is still a danger.

It was enacted in 2018 by the Republican-led Legislature shortly after a former student with a history of mental and emotional problems killed 17 students and staff at Marjory Stoneman Douglas High School in Parkland, less than an hour's drive from Thursday's shooting.

Facebook also allows users to report troubling posts and will forward them to law enforcement.

“That's how this could have been prevented. If somebody would have let us know who he is, we would have contacted him, seen if he has got a gun, gotten him into mental health and you wouldn't have two people dead,” Bradshaw said. “This didn't have to happen.”

The ex-wife's family told the Palm Beach Post she did try to get Wall help, but no one listened.

“He had mental issues. He wasn’t taking care of himself,” said Maia Knight, Wall's former sister-in-law. “My sister was going to the courthouse, going to police, telling everyone he needs help. My sister was trying to help him but didn’t know how.”

The Associated Press isn't naming the ex-wife to protect her privacy. She did not return a call Friday seeking comment.

Maj. Talal Masri, the lead detective, said the 69-year-old woman pushed her grandson into the store shortly after 11 a.m. Thursday, using a cart shaped like a race car so toddlers can play while the adult shops. Authorities have not released the victims’ names, citing a state law that allows survivors to block their release.

About 20 minutes later, Wall arrived at the store on a red scooter. He and his ex-wife had previously owned a dry cleaner in the shopping center, state records show, but it is unknown when it closed. Video shows he had been inside both the Publix and a nearby drugstore earlier in the morning and had approached people but then turned away, Masri said.

This time, Wall entered the Publix using a golf putter as a walking stick. He walked around for a few minutes before entering the produce section, where the woman was shopping with her grandson still in the cart.

He followed them for about three minutes before he pulled a handgun and shot the child, Masri said. The woman jumped on him and Wall's gun briefly jammed. She fell to the floor and he shot her and then himself. All died at the scene.

The shooting sent dozens of employees and customers fleeing the store, but no other injuries were reported.

Wall had been in financial and personal disarray for years before the shooting.

Meanwhile, he had accumulated more than $215,000 in debts, most of it owed on the home his ex-wife now owns, the bankruptcy file shows. She divorced him in 2018 and he had signed over their house to her in 2019, Palm Beach County court records show.

No previous criminal record for Wall could be found. Wall's bankruptcy lawyer, Ryan Loyacano, did not return a call and an email seeking comment.

Publix is Florida’s largest grocery chain and has more than 1,200 stores in the Southern United States. The company said in a Thursday statement that it was cooperating with law enforcement. The sheriff’s office said the supermarket would be closed until Saturday.

Royal Palm Beach is a middle-class suburb of 40,000 residents, about 15 miles (24 kilometers) inland from Palm Beach.

Man who drove at Minneapolis protesters charged with murder

MINNEAPOLIS — (AP) — A St. Paul man accused of speeding up and driving into a group of protesters in Minneapolis while he was drunk, killing one person, was charged Wednesday with intentional second-degree murder. Prosecutors say Nicholas Kraus, 35, was visibly intoxicated Sunday night when he sped up and...

BALTIMORE — (AP) — One person was killed and five others were wounded Wednesday when gunmen walked up a street and opened fire on a Baltimore block from an intersection, the city's police commissioner said. Commissioner Michael Harrison said that the shooting erupted in a west Baltimore neighborhood and the...

ST. LOUIS — A St. Louis teen is accused of shooting his father while the man was choking the 13-year-old boy’s mother, authorities said. Police were called to a home shortly after 1 a.m. CDT on Wednesday and found a 47-year-old woman suffering from a gunshot wound to her torso, KSDK reported. A 50-year-old man had been shot in the area of his legs and buttocks and was in critical condition, the television station reported.

SALT LAKE CITY — (AP) — A Utah state attorney angry about being awakened from a nap has apologized for sending an expletive-laden email to an LGBT politician campaigning to be the first Asian American person elected to the Salt Lake City council. Assistant Utah Attorney General Steven Wuthrich told...

Prosecutors: New trial not merited for ex-cop in Floyd death

MINNEAPOLIS — (AP) — Prosecutors say the former Minneapolis police officer convicted of murder and manslaughter in George Floyd's death should not be granted a new trial because the proceedings were fair and Derek Chauvin was found guilty by an impartial jury, according to a court document filed Wednesday. The...

Driver charged with murder after ramming into protesters in Minneapolis, killing 1, officials say

MINNEAPOLIS — Prosecutors in Hennepin County on Wednesday announced that a second-degree murder charge has been filed against the man accused of driving into protestors in Minneapolis late on Sunday night, killing one person and injuring another. Hennepin County Attorney Mike Freeman said Nicholas Kraus, 35, was drunk when he...

TROY — A Troy police officer who was fired for use of force and other city policy violations had at least five previous issues involving use of force in the department, according to the department’s police chief. Officer Eric Kilbourne was fired after an internal investigation into an incident involving...

COLUMBIA, S.C. — (AP) — The South Carolina Supreme Court on Wednesday blocked the planned executions of two inmates by electrocution, saying they cannot be put to death until they truly have the choice of the firing squad option set out in the state's newly revised capital punishment law. The...

COLUMBIA, S.C. — (AP) — The South Carolina Supreme Court on Wednesday blocked two executions that had been set for this month under the state’s recently revised capital punishment law. The high court halted the planned executions of inmates Brad Sigmon and Freddie Owens. The executions had been scheduled less...

Senators would stop 'micropolitan' label for 144 US cities

Some lawmakers are trying to stop 144 U.S. cities from losing their designations as “metropolitan areas" as the federal government updates its standards, doubling the minimum number of residents required in a city's urban core to 100,000 people. Sens. John Thune, a Republican from South Dakota, and Mark Kelly, a...