Posted by
COVID-19 Updates
5 days ago 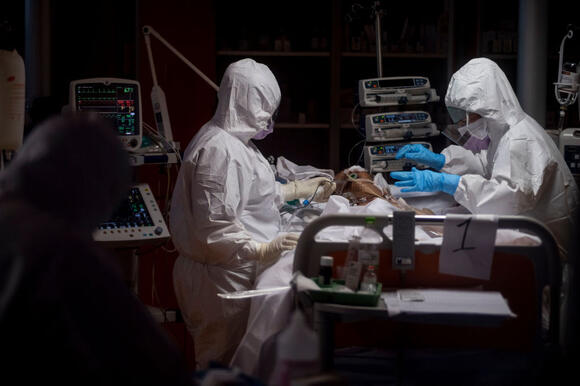 (WASHINGTON) Emergency room departments reported a surge in visits for suspected suicide attempts among adolescent girls aged 12 to 17 in early 2021, compared to years prior to the pandemic, the Centers for Disease Control and Prevention reported on Friday.

The new study, which used data from the National Syndromic Surveillance Program, documented an average of 50.6% more suspected suicide attempt visits between Feb. 21 and March 20, 2021, compared to the same period in 2019.

“The findings from this study suggest more severe distress among young females than has been identified in previous reports during the pandemic, reinforcing the need for increased attention to, and prevention for, this population,” the report said.

Overall, adolescents had 39% more suspected suicide attempt visits in the winter 2021 period compared to 2019, with those numbers largely driven by girls. There was a 3.7% rise in these visits for adolescent boys during that period.

The study drew on data from about 71% of the nation’s emergency departments in 49 states. The conclusion follows a number of recent studies that showed increased rates of mental health problems and suicidal thoughts and behavior among teenagers during the pandemic lockdown orders.

The agency called for more attention and effort to reduce the risk of suicide, especially among adolescent girls.

(Reuters) – The following is a roundup of some of the latest scientific studies on the novel coronavirus and efforts to find treatments and vaccines for COVID-19, the illness caused by the virus. COVID-19 hospitalizations up among U.S. adolescents. COVID-19 hospitalizations rose among U.S. adolescents in March and April, and...

COVID Tied to Spike in Suicide Attempts By Girls

ER visits related to suicidal ideation rose by 50.6 percent from 2019 to 2021. Increases in these types of admissions have been steadily documented throughout the COVID-19 pandemic. Adolescent boys only saw a 3.7 percent increase in ER visits for the same period. New research reveals that suicide-related admissions to...

PITTSBURGH — A heart condition in young people who got the COVID-19 vaccine is being investigated by the Centers for Disease Control and Prevention. The CDC said it’s an extremely rare and mild heart condition, but it’s something parents should be aware of. Called myocarditis, the condition causes inflammation in...

JACKSON, Miss. (WLBT) - As the country begins to turn the corner on the pandemic with fewer COVID deaths and cases in adults, the United States is seeing a rise in cases among children. “It is the same virus we have been dealing with all along, but it changes in...

The Centers for Disease Control & Prevention (CDC) has released brand-new data on the number of people who have been hospitalized or died despite being fully vaccinated for COVID-19. To be fully vaccinated, two weeks or more must have passed since they received the second dose of the Pfizer or...

The 'trauma' of the pandemic and rising adolescent suicide

According to one large hospital system in Colorado, the pandemic's emotional toll on kids has become a “state of emergency," with adolescents experiencing high rates of anxiety, depression and self-harm. Suicide is now the leading cause of death for children over the age of 10 in the state. William Brangham talks with Dr. David Brumbaugh, the chief medical officer for Children's Hospital Colorado.

Emergency room visits related to suspected suicide attempts by teenage girls spiked in the first months of 2021 compared to rates in 2019 and 2020, the Centers for Disease Control and Prevention reported on Friday. The new study, which relied on data from the National Syndromic Surveillance Program, showed that...

Coronavirus hospitalization in teens rose in March and April with nearly a third of patients requiring ICU admission, according to a Centers for Disease Control and Prevention report released Friday. “I am deeply concerned by the numbers of hospitalized adolescents and saddened to see the number of adolescents who required...

The CDC is urging parents to vaccinate their teens after an increase in coronavirus hospitalizations among kids ages 12 to 17.

There is a staggering increase in the number of children experiencing depression. Children's Hospital and Medical Center in Omaha reports depression among children is up 65% in the last six months. One of the top doctors there said the pandemic is just part of the problem. Doctors said living in...

CDC Urges Parents to Vaccinate Their Teens: 'Much of This Suffering Can Be Prevented'

The Centers for Disease Control and Prevention (CDC) Director Rochelle Walensky is calling on parents to vaccinate their teens against COVID-19. On Friday, Walensky said that she is troubled by the findings of a new study that showed increased rates of COVID-19 hospitalizations among those aged 12 to 17 years old.

Shortly after the pandemic began, when businesses and schools first closed and social lives turned upside down, emergency department visits for suspected suicide attempts started to increase among teens between 12 and 17 years old. As winter approached, visits skyrocketed among girls in particular. During February and March 2021, hospital...

Attempted suicide rates among Victorian teenagers soar by 184 per cent in past six months, Kids Help …

Sumary of Attempted suicide rates among Victorian teenagers soar by 184 per cent in past six months, Kids Helpline reveals:. Forty-four per cent of Victorian emergency interventions from December 1, 2020, to May 31, 2021, were responding to a young person immediate intent to suicide, while child abuse emergencies triggered 31 per cent..

Data from emergency departments documented a surge in visits for suspected suicide attempts among 12- to 17-year-old girls in early 2021, compared to before the pandemic, according to a study published on Friday. The Centers of Disease Control and Prevention (CDC) research determined that emergency departments reported a mean of...

Romance fraud reports soar by 40% during coronavirus pandemic, says Which?

Romance scam reports have soared during the coronavirus pandemic, according to Whic ?. The consumer group’s analysis of Action Fraud data found romance fraud reports were up by 40% in the year to April 2021, compared with the previous year, with more than 7,500 reported scams. Reported losses reached £73.9...

MONDAY, June 7, 2021 (HealthDay News) -- COVID-19-associated hospitalization rates increased recently for adolescents, and a considerable proportion of those hospitalized were admitted to the intensive care unit, according to research published in the June 4 early-release issue of the U.S. Centers for Disease Control and Prevention Morbidity and Mortality Weekly Report.

Suicide makes an attempt amongst adolescent ladies surged by greater than 50% throughout pandemic, CDC says

Suicide makes an attempt surged amongst 12- to 17-year-olds, particularly adolescent ladies, in the course of the Covid-19 pandemic and obtained worse the longer social distancing orders and authorities lockdowns continued, in line with new knowledge from the Facilities for Illness Management and Prevention. Emergency division visits at hospitals amongst...

Suicidal thoughts, attempts among US adolescents

What The Study Did: Differences by sex and race/ethnicity in suicidal thoughts and nonfatal suicide attempts among U.S. adolescents over the last three decades were assessed in this survey study. Authors: Yunyu Xiao, Ph.D., of Indiana University-Purdue University in Indianapolis, is the corresponding author. To access the embargoed study: Visit...

MONDAY, June 14, 2021 (HealthDay News) -- A rising number of young Americans, including children, are taking their own lives using firearms, a new study finds. Researchers found that between 2008 and 2018, gun suicides showed an "alarming" increase among Americans aged 5 to 24. And while those suicides remain rare among children, the rate among kids under 15 quadrupled during the study period.