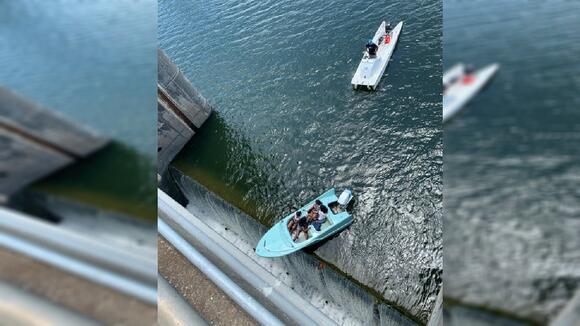 AUSTIN, Texas — A day on the lake turned into a close call for four people aboard a boat Thursday, who were rescued after their vessel nearly fell 36 feet over a dam.

Police said four female visitors had rented the electric boat and drifted too close to the dam, KVUE reported. The boat did not have enough power to get out of the spillway. They called the rental company, but their boat was not powerful enough too and also got stuck.

Austin police sent a patrol boat to the area. Officers aboard were able to throw a rope to the stuck vessel and give everyone life jackets. All of the boaters were then pulled to safety.

No one was injured.

POLK COUNTY, Fla. — Maybe he just needed a snack break?. According to the Miami Herald, deputies in Florida rescued a 3-foot-long alligator Wednesday after Polk City residents spotted the reptile underneath a Circle K vending machine. The Polk County Sheriff’s Office later took to Twitter to share a series of photos snapped during the incident.

PHOENIX — (AP) — Investigators on Friday were trying to determine why a gunman opened fire on vehicles and pedestrians for some 90 minutes across metropolitan Phoenix, leaving one person dead and a dozen others injured in the string of drive-by shootings. Authorities believe a man they arrested after the...

TULSA, Okla. — Juneteenth honors the end of slavery in the United States. June 19, 1865 marks the day when federal troops arrived in Galveston, Texas to take control of the state and ensure all enslaved people be freed. >>>>> Below is a list of all Tulsa Juneteenth Festival events...

TULSA, Okla. (KOKI) — Tulsa police are looking for a man shown on video at a north Tulsa Dollar General dragging two women out of the store trying to take one of their pursesPolice say it happened on June 2nd at the store near Latimer and Sheridan. The video shows...

MUSKOGEE, Okla. — A Muskogee furniture store is a total loss after a fire spread through overnight leaving nothing left but the building’s frame. Firefighters received the call around 3 a.m. Friday and saw heavy fire when they arrived. As of 7 a.m. crews were still working to put out...

NEW YORK — A tropical threat churning in the Gulf of Mexico is taking aim at the Gulf Coast -- and is forecast to strengthen into tropical storm Claudette. Tropical storm warnings have been issued in Louisiana, Mississippi, Alabama and the Florida panhandle as the region prepares for heavy rain, gusty winds and potential flash flooding.

DURHAM, N.C. — Two people have died and two others are hurt after gunfire erupted overnight in Durham, North Carolina, authorities said. According to WRAL and WTVD, the incident occurred about 10 p.m. Thursday near the intersection of Holloway Street and Guthrie Avenue. Durham police arrived to find one woman and three men with gunshot wounds, WRAL reported.

DETROIT — A 2-year-old boy was killed and a 9-year-old boy was seriously hurt when gunfire erupted on Interstate 75 in Detroit, authorities said. According to The Detroit News and WJBK, the incident occurred shortly before 10 p.m. Thursday near McNichols Road. Michigan State Police said a driver was traveling on I-75 southbound when someone inside “a light-colored, four-door passenger car” opened fire at the victims’ vehicle.