By Brett Stayton
Posted by
Whiskey Riff
2 days ago

One particular female grizzly bear in Wyoming’s Grand Teton National Park is some what of a big deal. Popular with tourists, “Bear 399” is arguably the most famous grizzly bear in the world.

Grizzly 399 was born in 1996, and according to Outdoor Life she was given her name/number by the Yellowstone Interagency Grizzly Bear Study Team who has monitored her closely for the duration of her life.

She is 7-feet tall, weighs 400-pounds and has given birth to 16 cubs over the years. Though she has spent most of her life in close proximity to tourist activity, the bear has never had a negative run in with humans.

Rafael Sandoval was recently exploring Grand Teton National Park when he captured an absolutely awe inspiring sequence of photos of Bear 399 hunting down an elk calf to feed her own cubs.

The pictures were originally shared by wildlife photographer Rafael Sandoval (give him a follow).

“So this just happened last night and my heart is still racing… This grizzly sow #399 bagged an elk calf for a dinner for five after an intense chase. For the past few months, bears in the Greater Yellowstone Ecosystem have been browsing on nutrient dense vegetation such as grasses, flowers and roots.

However, as prey species like elk, bison and deer begin dropping calves like it’s going out of style, the bears have begun to switch over to more savory menu options. The CALFeteria is open, folks!”

Even though it’s only an elk calf, the raw power and speed of the grizzly is on full display. Grizzlies are capable of reaching speeds of 35 mph, which is terrifyingly fast when you think about it.

In one photo the bears long sharp claws are clearly visible as it closes in and overwhelms the baby elk.

The fact that the mama bear had 4 cubs in tow to feed somehow makes the little elk’s demise less sad.

Once the elk was on the ground, those baby bears jumped on that thing like drunk people on a 2AM pizza.

Elk Tries To Escape A Wolf, Slams Right Into A Moving Car At Yellowstone National Park

Matt Fluke of Idaho Falls, Idaho, was looking for a place to picnic with his family when the car behind him got smoked by an elk. Boom, right into the side of their SUV.

Of course there is nothing special about hitting an elk with your car, just about anybody that’s every heard a country song has a deer a time or two. But this elk wasn’t just crossing the road, it was running for its life.

Yep, right after it slammed into the car and knocked itself out, a black wolf emerged from the trees, just seconds behind it.

“I didn’t look at my dashcam video until I got back to where we were staying at. Originally I thought it happened behind that car. We pulled over for a second and saw the elk on the road and the wolf with it.”

Naturally, they pulled over to watch nature take its course.

Wanna catch an elk? Just chase it into a moving car… chase is over.

“There was a turn out real close and lots of other cars stopping around there. You could see it from where we were at and the car that was behind me pulled over and then pulled out and went down the road… it was wild.”

Vote Dutton Rip ’24 – Get the shirt from Whiskey Riff Shop. 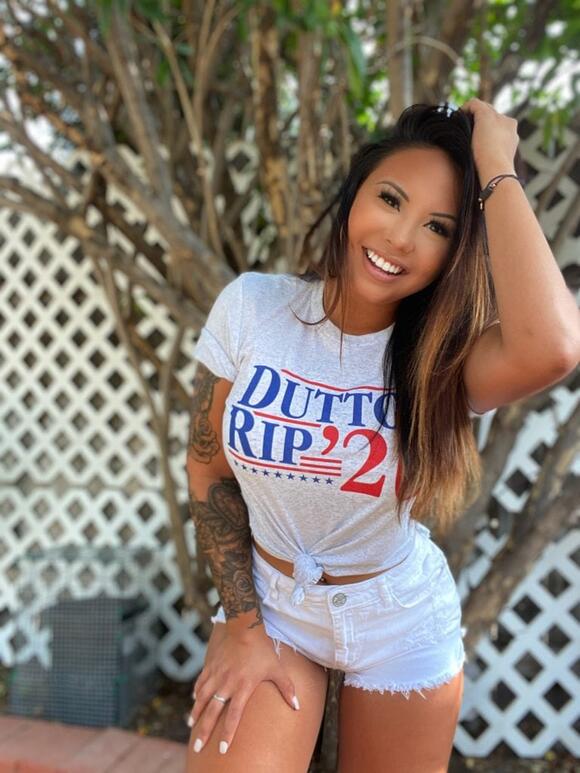 This just in. If you're a bison in Yellowstone National Park, you can take a nap anywhere you dang well please. That happened recently when traffic was brought to a halt by a calf that needed a few z's. Here's the description from a driver in traffic that witnessed this...

Check Out the Volcano Observatory Update from Yellowstone’s Grand Canyon

It's always interesting to stay abreast on all things volcano in Yellowstone, but it's even better when it's shot from the scenic view from the Grand Canyon of the Yellowstone. The official Yellowstone National Park Facebook page shared the monthly volcano observatory update video (shown below), along with a message...

Colorado has its first litter of gray wolf pups since the 1940s years, state wildlife officials said Wednesday. A state biologist and district wildlife manager each spotted the litter of at least three wolf pups over the weekend with their parents, two adult wolves known to live in the state, Gov. Jared Polis announced in a news release. Most wolf litters have four to six pups, so there could be more.

Just so you know, grizzly bears charge park rangers too. Last week, a Yellowstone National Park ranger arrived at a bear jam between Norris Junction and Swan Lake Flat where people were behaving poorly, leaving their vehicles and crowding “dangerously close within 20 yards of a breeding pair of grizzly bears,” the park said in a statement.

The Steamboat Springs man found a mother bear and two cubs in his garage and tried to back away slowly before the bear attacked.

Bison have returned to the Great Plains. Now what?

Louise Johns is a documentary photographer and journalist based in Montana. Her work has appeared in a variety of outlets including The New York Times, The Washington Post, High Country News, and National Geographic. This story originally featured on Undark. On a blustery October afternoon at the Wolfcrow Bison Ranch...

It's that time of year when more and more vacationers are heading to our nation's national parks, and this video is yet another reminder of just how wild an encounter with the animals at our favorite destinations can be. In a matter of moments, a Yellowstone Park Ranger went from...

A hiker in Yellowstone National Park was injured by a bear, possibly a grizzly, Friday morning while hiking the Beaver Ponds Trail at Mammoth Hot Springs in the park. The 39-year-old man was about 1.5 miles from the trailhead when he saw two bears, which he thought were grizzlies. "One...

Grizzly put down in park

A problem grizzly bear has been euthanized in Grand Teton National Park after it persisted in seeking out human food, getting into trash and bird feeders in a neighborhood on the south end of the park. This is the same 2-year-old male bear that had been relocated to the northern end of the park early in May. However, the bear returned and was trapped.

A 39-year-old male sustained injuries from a bear while hiking on the Beaver Ponds Trail at Mammoth Hot Springs Friday morning. The post Solo hiker injured by bear in Yellowstone appeared first on Local News 8.

FIELD – Two yearling grizzly bear cubs have been orphaned following the death of a well-known mama bear on the busy Trans-Canada Highway in Yoho National Park. Female grizzly bear No. 156, who produced two litters of cubs in her nine years of life, was struck by a car on the highway about one kilometre east of Field at 2 a.m. on Saturday (May 29).

Authorities in Northern California were called to a home after a mountain lion broke through a window and entered a home after confusing some taxidermy heads for live prey. The San Bruno Police Department said the cougar broke through the window of the home around 12:20am on Tuesday. "It is...

For the Claypool clan, deer season certainly isn't finished when the whitetail rut reaches its conclusion!. With summer looming dead ahead, how about allowing your mind to skip forward to thoughts of fall and whitetail adventures? May I take the liberty of evoking images of quiet, wide-open spaces and cool, sunny locales? Follow along with me for a few minutes as I tell you about some high-octane deer action I encountered a couple winters back.

An adult female grizzly bear, who had two cubs, was struck and killed on the Trans-Canada Highway in Yoho National Park, 1 km east of Field on Saturday May 29 at approximately 2 a.m. Parks Canada said the 9-years-old bear, GBF156, was and known to them and her home range...

It's not every day that I can write this phrase and be completely truthful. The Oscar Meyer Weiner Mobile just photobombed a bison in Yellowstone National Park. Yes, this really did just happen. Diana Borgmier shared this very unique moment just a few days ago on Facebook in the Yellowstone...

Welcome to Scientific American’s National Park Nature Walks. I’m your host and guide Jacob Job. Today, we explore America’s first national park. In today’s episode it’s May and we head to Yellowstone National Park in northwestern Wyoming. Yellowstone might be the United States’ most famous national park, attracting millions of visitors each year from around the country and world. Most come to Yellowstone to seek out its wildlife or to gaze upon its many geysers.

A video of a teenager from California has gone viral after she won a standoff with a wild mama bear in her backyard over Memorial Day weekend. Per NBC Los Angeles, security camera footage showed a bear and two cubs walking along a backyard wall in a house in California. The family’s dogs rush outside to combat the bear and her two cubs.

Idaho Fish and Game will begin annual research trapping efforts for grizzly bears in the Upper Snake Region beginning in June. To avoid conflicts with hunters, early operations will be confined to areas where hunting is prohibited. More intensive capture efforts will begin after spring hunting seasons conclude. Grizzly trapping...