By Jack Rathborn
Posted by
The Independent
8 days ago 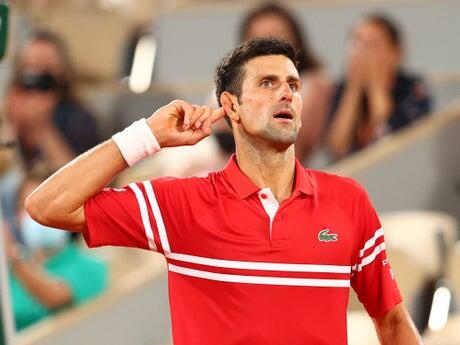 Novak Djokovic brushed off Rafael Nadal in an epic semi-final showdown to remain on course for his second French Open title.

The Serbian will meet Stefanos Tsitsipas in Sunday’s final at Roland Garros after clinching a second ever triumph over his rival, sealing victory late in the night in Paris 3-6, 6-3, 7-6, 6-2.

The world No 1 remains on course to become the first male player in the Open era to win every Grand Slam at least twice.

It is Djokovic’s second ever win over the Spaniard, following a famous victory in 2015, though he failed to win the title that year, instead losing to Stan Wawrinka and eventually sealing the title a year later.

Nadal falls to 105-3 all-time on the famous clay surface in the French capital, with Djokovic primed to close the gap on Roger Federer for the most Grand Slam titles by a male player.

The Swiss leads the way with 31 titles, but Djokovic is just two behind on 29 and Nadal one more back on 28.

“The first thing I want to say is it was my privilege also to be on the court with Rafa for this incredible match,” Djokovic said after victory.

“It is surely the greatest match I have played here in Paris. It’s also the match with the best atmosphere and ambiance and energy.”

Novak Djokovic insists he does not copy Rafael Nadal on clay, as their potential semi-final showdown became closer to reality after both players progressed through to the quarter-finals yesterday. Djokovic has faced Nadal eight times at Roland Garros, winning just once. However, the Serb will be adopting his own tactics...

The world number 1 Novak Djokovic will play the Mallorca Championships 2021 in preparation for Wimbledon. The Serb gets a wild-card by tournament director Toni Nadal (we have to recall that Rafael Nadal will not play the grass-season and the Tokyo Olympic Games). Djokovic will also attend the official inauguration...

Why does Rafael Nadal not like playing Novak Djokovic? Simply, because ‘he’s one of the best in history’

Rafael Nadal knows Novak Djokovic better than anyone when it comes to standing 78 feet away and trying to knock him out of a tennis tournament. The Spaniard set up a semi-final clash with arguably his greatest rival by beating Diego Schwartzman on Wednesday afternoon. His progress was not entirely...

'A lot of people, including myself, think that Roger Federer...', says legend

Novak Djokovic wrote yet another page of history at Roland Garros 2021. The world number 1 managed to take home an epic final, in which he recovered two sets of disadvantage to Stefanos Tsitsipas (11 years younger) . The 34-year-old Serbian had already recovered Lorenzo Musetti and Rafael Nadal on his way to Paris, highlighting a physical and mental strength that perhaps has no equal in the modern era of the sport.

Novak Djokovic claimed he would remember his epic win against Rafael Nadal in the French Open semi-finals for the rest of his life, after a game that has already been hailed as one of the best ever seen on a clay court. The great Spaniard went into the contest having...

‘There is no way I am getting past Novak Djokovic,’ says Roger Federer

Roger Federer says he has surprised himself with how well he is playing at the French Open, but there is ‘no way’ he is beating Novak Djokovic. Federer and Djokovic are in the same section of the Roland Garros draw and will meet in the quarterfinals should they both progress that far.

"Watching Rafa play at Roland Garros to me is like watching your favorite movie," two-time major champion Victoria Azarenka tweeted as Rafael Nadal was making short work of Cameron Norrie in the French Open's third round. "You enjoy it a lot but you kinda already know what is going to happen."

Rafael Nadal out of Wimbledon, Olympics

Rafael Nadal will not play Wimbledon in two weeks or the Olympics next month, saying he is "listening to my body." "The goal is to prolong my career and continue to do what makes me happy, that is to compete at the highest level," was posted on Nadal's social media. "The fact that there has only been 2 weeks between RG and Wimbledon, didn't make it easier on my body to recuperate after the always demanding clay court season."

Rafael Nadal has said he will not be taking part in Wimbledon or the Tokyo Olympics this year. The 35-year-old announced the move on social media, saying it was not “an easy decision” but “after listening to my body” and discussing it with his team he said it was “the right decision”.

'I have never seen Rafael Nadal so powerless at...', says top coach

After winning the second Roland Garros of his career, achieving an extraordinary feat between the semi-final and the final, for Novak Djokovic it seems that there are no more limits. The former tennis player and well-known coach of the Serbian champion, Goran Ivanisevic, gave an interesting interview to the Tennis Majors microphones talking about the latest feat of his student and the next goals of Novak.

Last Friday, Novak Djokovic and Rafael Nadal made their 58th appearance in the French Open semi-finals. The Serbs expelled the Spaniards in Paris for the first time in six years, causing Nadal a third defeat at his beloved event and advancing to the sixth final in the French capital. Djokovic...

Rafael Nadal and Naomi Osaka, with 24 Grand Slam titles between them, both withdrew from Wimbledon on Thursday with the Spanish star also pulling out of the Tokyo Olympics in a bid “to prolong my career”. Nadal’s snub of the Olympics was later followed by world number five Dominic Thiem...

The dream of conquering the 21st Slam of his career was stopped in the semifinals and Rafael Nadal could not be confirmed in Paris, defeated by his great opponent and world number one Novak Djokovic. After four hours of play and 11 minutes Novak won with the result of 3-6 6-3 7-6 6-2.

Novak Djokovic writes history as the first player with..

With six Major finals, you have an excellent chance to become a winner at one of the four most prestigious tennis events. When you reach six finals at a single Major, it's worth a tournament-legend title and a place on the exclusive list in the Open era. Since 1968, only...

Toni Nadal: "If Djokovic had lost in Paris, Rafa would be less disappointed!

Novak Djokovic wrote a new page of history at the Roland Garros 2021. The world number 1 not only won his 19th career Slam, but also became the first player in the Open Era to have won all four Slams at least twice. The Serbian champion has forfeited two wins from two sets down along the way, respectively in the round of 16 against Lorenzo Musetti and in the final against Stefanos Tsitsipas.

Bjorn Borg's record that Rafael Nadal is unlikely to equal

Since his debut on the Parisian clay oft he Roland Garros, the king of clay court Rafael Nadal has achieved an incredible series of numbers starting from the extraordinary record of 13 Roland Garros conquered and a series of 105 wins and only 3 losses in 108 games played. Rafa's...

Competing against each other for the 58th time in the last 15 years, Novak Djokovic and Rafael Nadal played another epic encounter in the Roland Garros semi-final. After four hours and 11 minutes, Djokovic scored a 3-6, 6-3, 7-6, 6-2 triumph to advance into the sixth Roland Garros final and deliver Nadal's third loss at his beloved tournament.

The recently finished Roland Garros was the first Major with Roger Federer, Rafael Nadal and Novak Djokovic in the same half of the draw. World no. 1 Djokovic led the field against his biggest rivals, seeking the second Major crown of the season and the first in Paris in five years.

Seeking the 14th Roland Garros title, Rafael Nadal came to Paris after winning two titles on his beloved surface this spring. Nadal endured challenging encounters and match points in Barcelona and Rome to lift the first trophies of the season, hoping for more of the same in his 18th appearance at Roland Garros.

World No. 6 Alexander Zverev was stunned in three sets by Ugo Humbert in the second round of the Noventi Open in Halle. The 22-year-old prevailed 7-6 (7-4), 3-6, 6-3 against the third seed at the ATP 500 grass court tournament. Zverev is a two-time runner-up in Halle – having...