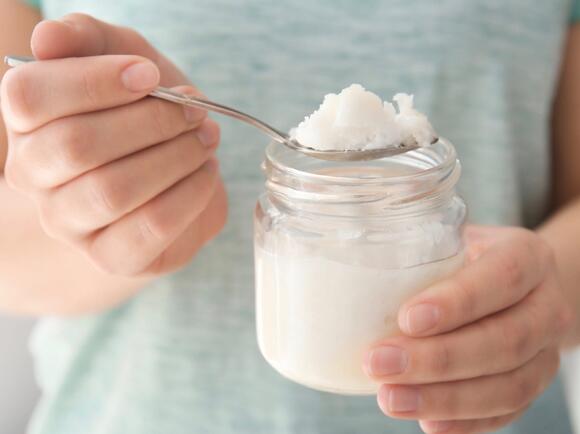 Coconut oil is often thought of as a healthy alternative to butter or other oils used in cooking and baking. However, nutritionists say it may be best to limit coconut oil.

No, coconut oil is not good for you

Saturated fats are solid at room temperature and become liquid when melted. "Think of it as going into your body as a liquid and then turning to that solid in your arteries," says Colleen Christenson , a registered dietitian and nutritionist. "This is essentially the basis for why it's recommended to avoid excessive saturated fat intakes."

Coconut oil is also a high-calorie food, meaning if you don't consume it in moderation it could cause weight gain. Fats contain nine calories per gram , which is much higher than the ratio found in carbs or protein, which both contain four calories per gram.

Despite its high saturated fat content, there are a few reasons that people think coconut oil is a healthy fat.

"MCTs are able to be digested and absorbed more rapidly than other fats, and therefore can be used as a more immediate energy source," says Melissa Rifkin , MS, RD, CDN, a dietitian based in New York City.

However, despite its benefits, store-bought coconut oils only contain around 54% MCTs, says Rifkin. Additionally, the chemical makeup of MCTs used in research tends to be different than those found in coconut oil.

"Many of the MCT oils used in clinical studies have eight or 10 carbon chains, whereas those in coconut oil typically have 12. This composition makes the coconut oil we use in cooking quite different from those studies using MCT oil," says Christensen.

Although coconut oil does have some MCTs , it doesn't have enough to reap their health benefits and override the negative consequences associated with its high saturated fat content.

Coconut oil does help you feel fuller for longer

Although coconut oil may not be as healthy of a food as most people think, it does have some health benefits, namely its ability to keep you fuller for longer, which might help with weight loss.

Fats are more calorie-dense than most foods, so eating them during meals may help you stay satiated compared to eating a carb-heavy meal. Increasing your MCT intake may also help curb your hunger.

However, you certainly shouldn't "add it to everything thinking it's the magical fat for weight loss and health," says Lisa DeFazio , a registered dietitian nutritionist based in California.

Consuming moderate amounts of healthy oils is good for you because they contain essential fatty acids that your body can't make on its own. There are three types of fats in plant-based oils:

To choose the healthiest cooking oil, opt for those with high amounts of monounsaturated and polyunsaturated fats and low amounts of saturated fat. Some examples of plant-based alternatives for coconut oil include:

Sesame oil: This oil is high in lignans , which are plant nutrients with antioxidant properties, possibly reducing the risk of heart disease and some cancers. Sesame oil has 40% monounsaturated fat, 46% polyunsaturated fat, and 14% saturated fat.

While many people think coconut oil is a healthy fat, it can actually increase cholesterol levels and lead to weight gain. Although it contains beneficial MCTs, it does not contain them at the same high percentage used in research, meaning it won't have the same benefits for your health.

Therefore, it's best to swap your coconut oil for other plant-based oils like olive or canola oil.

8 healthiest cooking oils and the best ways to use them Is coconut oil good for your skin? How to use it effectively, based on your skin type The science-backed health benefits of MCT oil and how much you should take each day There are tons of myths about drinking celery juice - here are 4 proven health benefits, backed by science Read the original article on Insider

Health Benefits of Bitter Melon: Eat it to Reduce Your Risk of Disease

Bitter melon is a fruit that you may never stumble across unless you find yourself in tropical areas or go out of your way to look for it in specialty markets, but it's certainly a good one to have on your radar right now, in light of the Delta variant cases rising across the country.

This $19 Supplement Can Lower Blood Pressure, Decrease Your Risk of Heart Disease, and Give You an Energy Boost

Good blood flow is critical to so many different processes in your body. It regulates blood pressure, keeps cardiovascular problems at bay, and makes you feel energized as you go about your life. If you’re looking for a bit of help on this front, a little-known supplement called citrulline may be able to help.

Heart disease is currently the leading cause of death in the United States. As numbers continue to rise, it becomes increasingly important that we prioritize our heart health, especially as we get older. Luckily, emerging research shows that our dietary habits can positively (or negatively) influence our heart health. According to a new review of studies, there is a specific way you should structure your diet in order to prevent cardiovascular disease.

Eating processed meat raises the risk of heart disease by a fifth, according to the largest ever analysis of research into the impact of meat consumption on cardiac health. Researchers at the University of Oxford are urging the public to cut their red and processed meat consumption by three-quarters, or to give it up entirely, to lower their risk of dying from coronary heart disease.

Eating This 3 Times a Day Can Boost Your Heart Health, New Study Says

While everyone may require a different plan of attack when it comes to maintaining their heart health, there's at least one universal truth: Everyone should be keeping an eye on their risk of cardiovascular disease. After all, about one in every four deaths in the U.S. is caused by heart disease, according to data from the Centers for Disease Control and Prevention (CDC). But besides getting plenty of exercise and staying active, there may be other diet tricks that can help you maintain a healthy ticker. And according to one new study, eating one type of food item three times a day can provide a serious boost to your heart health, especially as you age. Read on to see what you should be adding to your meals.

There are a number of factors that are known to raise your risk of developing heart disease, from eating too much salt to drinking too much alcohol. But that's just scratching the surface. With heart disease still the leading cause of death in the U.S., it's important to be aware of all of the risks, not just the biggies. With that in mind, researchers for one recent study say they uncovered an "often overlooked cardiovascular risk factor" that many people do every single day. Read on to find out which daily habit could be putting your heart in danger.

When it comes to fruits that everyone enjoys, it makes sense why mandarin oranges often reign supreme: They’re easy to peel, fun to pull apart, and yummy to eat. But on top of all of that deliciousness, these oranges are also full of health benefits, including being a huge help to your immune and cardiovascular systems.

Eating just three servings of whole grains a day kept weight and cardiovascular disease risks under control, a study found. Add variety to your diet with these ancient grains.

Children and young people whose mothers had a BMI greater than 30 during early pregnancy are at an increased risk of fatty liver disease. This is shown in a register-based study from Karolinska Institutet and Harvard University published in the journal Journal of Hepatology. As obesity rates increase also in women at a child-bearing age, more and more young people are at risk of developing fatty liver disease, the researchers say.

Light-to-moderate drinking tied to lower risk of heart attack and death in patients with heart disease. July 26, 2021; 8:09 PM EDT (Updated July 27, 5:34 AM EDT) Light-to-moderate alcohol consumption is linked to a reduced risk of heart attack, stroke and death among those with heart disease, according to a study published in the journal BMC Medicine on Monday.

Shelling hemp seeds reveals the most nutritious and tender part of the seed — the heart. Hemp hearts have a slightly nutty taste, similar to sunflower seeds or pine nuts. Whether you mix them into your smoothie, sprinkle them on yogurt or cereal or add them to your baked goods, hemp hearts are a nutritional powerhouse with outstanding health benefits.

How vegetable oil could trigger your migraine pain

The throbbing, pounding, seemingly never-ending cycle of migraine is one of the most common causes of chronic pain. When statistics show that a whopping 90 percent of migraine sufferers are unable to function normally during an attack, it’s a true testament to just how severely this kind of pain can impact your entire life.

This Common Habit Could Increase Your Risk Of Heart Disease

Your heart health is influenced by a wide variety of behaviors. A recent study shows a common behavior could be increasing your risk of developing heart disease. Heart disease is the leading cause of death in the US, causing about 1 in 4 deaths. The term refers to several diseases that affect the heart, which can be influenced by a variety of things, from how much you work out, to the number of french fries you eat on a weekly basis. This one habit, that we might be guilty of doing depending on our professions, could also increase your odds of developing heart disease.

What (and how) you eat can help lower systemic inflammation for long-term health. The old adage "you are what you eat" is especially poignant when you think about how our food can influence our health. "It's a large piece of the puzzle when it comes to reducing or ramping up inflammation in our bodies," says Caroline Margolis, RDN, a registered dietitian at Lifeway Foods.

In a new study from Mount Sinai, researchers found having excess pericardial fat — fat around the heart — increases the risk of developing heart failure, especially in women. They found women with high amounts of heart fat are twice as likely to develop heart failure, while men are 50%...

Eating Fermented Foods Both Fights Inflammation and Boosts Immunity, According to a New Study

Packed with live probiotics (aka good gut bacteria), fermented foods have long been the darlings of dietitians thanks to their many microbiome-balancing benefits. Studies have shown that eating the probiotic strains that thrive in these naturally tangy foods (such as yogurt, sauerkraut, and kimchi) can boost your overall intestinal and respiratory health and even slash your risk for chronic conditions like type 2 diabetes and heart disease.

Noted philosopher and historian Homer Simpson once called alcohol “the cause of, and solution to, all of life’s problems.” When it comes to people’s health, that may be more accurate than you might expect. There are a host of health issues associated with drinking to excess, but it turns out that drinking in moderation has a lot to offer. That, at least, is one of the conclusions of a new study published in the journal BMC Medicine.