By Joey Blackwell
Posted by
BamaCentral
4 days ago 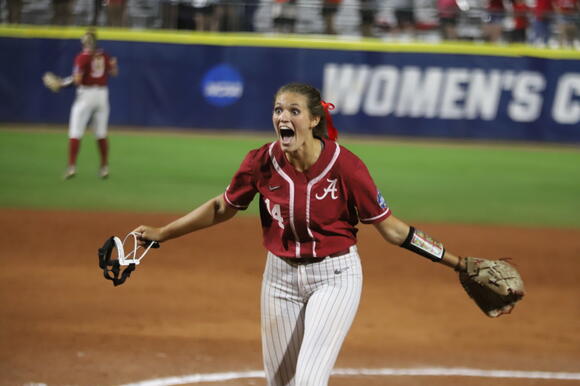 TUSCALOOSA, Ala. — Alabama softball junior pitcher Montana Fouts has been named the 2021 Schutt Sports/NFCA Pitcher of the Year, the award's committee announced on Friday afternoon.

Fouts was named a unanimous First Team NFCA All-American, finishing the 2021 season with an impressive 27-4 record. Along with her strikeouts — the third-most in a single season in Crimson Tide program history — Fouts also recorded a 1.61 ERA. On the year, she recorded 22 double-digit strikeout performances

In total, Fouts pitched 24 complete games in 2021, and also recorded three saves in her four relief appearances in the circle.

Fouts' highlight moment of the season came during the Women's College World Series against UCLA, where Fouts struck out 14 batters en route to the fifth perfect game in WCWS history. The perfect game occurred on Fouts' 21st birthday, exactly 21 years to the day since the last perfect game at the WCWS took place.

The Schutt Sports/NFCA Pitcher of the Year award was first awarded in 2019, an additional award alongside the Player of the Year award that had been presented since 2016. The award was voted on by members of the National Fastpitch Coaches Association NCAA Division I All-American Committee.

TUSCALOOSA, Ala. — University of Alabama pitcher Connor Shamblin announced on Tuesday that he'll be leaving the Crimson Tide and transferring to Memphis. The right-hander is originally from the state. He was recruited out of Briarcrest Christian High School in Lakeland, Tenn. Shamblin pitched three years for the Crimson Tide,...

BamaCentral Headlines ... The Extra Point: Has Jerry Jeudy Turned a Corner with the Broncos?. The junior is the third member of the Alabama program to make a U.S. Olympic Team, and first since 2004. It may not have been the ending the Crimson Tide had hoped for, but Alabama...

TUSCALOOSA, Ala. – Alabama men's basketball player James Rojas suffered a torn ACL in his left knee, head coach Nate Oats confirmed with an announcement Tuesday afternoon. The 6-8, 220-pound senior forward underwent successful surgery on his left knee Tuesday morning and is expected to make a full recovery with the anticipation of playing in the 2021-22 Southeastern Conference season.

23-0. Nick Saban's unblemished record against former assistants will likely be never touched by another coach again. It's even more impressive when you think about who he has beaten to get to this point — Jimbo Fisher, Kirby Smart, Lane Kiffin, Will Muschamp, Mark Dantonio, Billy Napier, among others. And...

There's not many rising sophomores in the country that have the blue bloods of college football wanting to play for them, but that's exactly what's happening with the recruitment of 2024 prospect Peyton Woodyard, a two-sport athlete from St. John Bosco High School in Bellflower, Calif. Woodyard took a trip...

When determining the top five women's swimmers and divers in program history, it's difficult to not factor in the athletes' performances on a global scale and remain solely focused on their time with the Crimson Tide. So that's exactly what today's list evaluates. Since the 1972 Olympic Games in Moscow,...

Alabama football coach Nick Saban has a knack for landing and developing elite talent at every position on the gridiron. The Crimson Tide's recruiting reach spans well over the United States and it's now gone international, as Saban and company have landed a punter from Australia to its 2021 class.

For the first time since 1987, Alabama women's track and field finished on the podium at the NCAA Women's Outdoor Track and Field Championships, with the Crimson Tide placing fourth on the final day of competition in Eugene, Ore. Alabama finished with 31 total points, giving the program its third-highest...

The Extra Point: Has Jerry Jeudy Turned a Corner with the Broncos?

After having trouble with dropped passes during rookie year, the word out of Denver is he's now catching everything thrown his direction. The buzz around the Denver Broncos is that Jerry Jeudy looked like a different player during recent OTAs, and all in a good way. Per Mile High Huddle,...

It’s never easy to say goodbye. That’s because it means the end of something. Seven Alabama softball seniors said goodbye last week after their season and Crimson Tide careers wrapped up in Oklahoma City in the semifinals of the Women’s College World Series. Their journey came to a painful end,...

Alabama senior Robert Dunning won the 2021 NCAA 110-meter hurdles title on Friday's final day at the Men's NCAA Track and Field Outdoor Championships in Eugene, Ore. Dunning recorded a time of 13.25 into a headwind, just one one-hundredth of a second slower than his program record that he set two weeks ago at the NCAA East Preliminary.

TUSCALOOSA, Ala. — Alabama men's golf assistant coach Jon Howell is departing the program after being named the director of golf at the Annandale Golf Club in Madison, Miss. Howell served as the assistant coach for the men's golf team for the last seven years. “This was an incredibly tough...

TUSCALOOSA, Ala. — Alabama freshman defensive back Ga'Quincy 'Kool-Aid' McKinstry is now just 'Kool-Aid', according to the Crimson Tide's online roster. While Ga'Quincy is still McKinstry's legal first name, his nickname of 'Kool-Aid' was given to him due to his eccentric personality. You can check out his updated name on the roster:

“A towel, [The Hitchhiker's Guide to the Galaxy] says, is about the most massively useful thing an interstellar hitchhiker can have. Partly it has great practical value. You can wrap it around you for warmth as you bound across the cold moons of Jaglan Beta; you can lie on it on the brilliant marble-sanded beaches of Santraginus V, inhaling the heady sea vapors; you can sleep under it beneath the stars which shine so redly on the desert world of Kakrafoon; use it to sail a miniraft down the slow heavy River Moth; wet it for use in hand-to-hand-combat; wrap it round your head to ward off noxious fumes or avoid the gaze of the Ravenous Bugblatter Beast of Traal (such a mind-boggingly stupid animal, it assumes that if you can't see it, it can't see you); you can wave your towel in emergencies as a distress signal, and of course dry yourself off with it if it still seems to be clean enough.”

Former University of Alabama linebacker Eryk Anders won the 14th fight of his career over the weekend. Anders defeated Darren Stewart by unanimous decision after three rounds during UFC 263. It was a rematch of the two’s first fight from back it March that was ruled a no-decision. The former...

It's not everyday that a rising ninth grader gets his dream offer from Alabama but that's exactly what happened with 2025 signal caller Davi Belfort. Belfort camped in Tuscaloosa earlier this week and performed well enough to receive a scholarship offer from coach Nick Saban. Alabama is only the third...

From the opening weekend of the 2021 season, when Alabama softball was supposed to start the season at a tournament in Texas only to have it cancelled because of ice storms, this Crimson Tide team faced adversity. Whether it was season-ending injuries, weather delays and cancellations, or playing an entire...

Just days after a season-ending loss to Florida State in the Women's College World Series national semifinals to Florida State and Alabama softball has already begun retooling its roster. Senior outfielder KB Sides entered the NCAA transfer portal on Wednesday afternoon. 247Sports was first to report. Due to the COVID-19...

Golf fans, remember the name, Hayden Carner. During his freshman year at Central Alabama Community College, the local product finished in the top five of every tournament he played this past season. That included winning two events, including the ACCC Conference Championship. Consequently, Carner is the Alabama Sports Writers Association's...