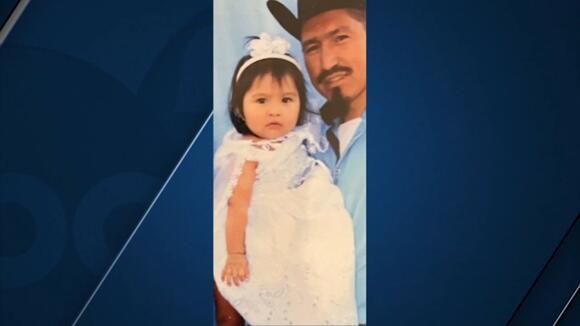 Last week, Ruben Campos Barrios found out his 3-year-old daughter, Jessica Campos, died after being left in a scorching hot car for two and a half to three hours. It comes just months after he lost his 8-year-old son, Jessica's brother, to brain cancer. Court documents reveal that Jessica Campos' internal body temperature was 114 degrees. "So he just wanted to die, he didn't want to be alive because that was his main reason to live," one of Barrios' family members told ABC7's sister station KFSN as they translated for him. Ruben's ex-girlfriend and Jessica's mother, 28-year-old Eustajia Mojica, has been charged with involuntary manslaughter and child abuse in connection to Jessica's death . MORE | Child, 3, dies after being left in car in triple-digit heat, police say

Visalia police say a 28-year-old woman was arrested Thursday after she left her 3-year-old daughter in a car for three hours amid triple-digit heat.

Visalia police say she drove to her sister's house last Thursday afternoon with her three children, but left Jessica behind in the car when they parked outside of the home. Mojica, police say, then tended to an illegal marijuana grow while her other children went swimming. Eventually, Mojica realized her daughter was missing, and found her laying down in the car's backseat, unresponsive. In their reports, police say Mojica told them she saw her kids outside of the car when they arrived at the house, but said "she had a lot going through her mind because she had just recently lost one of her children." Mojica also told police that she had gotten used to letting the kids get out of the car on their own, but that her other child who would usually help Jessica get out of the car would frequently close the door on Jessica and leave her trapped inside. RELATED | What everybody should know to help prevent hot car deaths

During the summertime, the temperature inside a car can skyrocket to 125 degrees in a matter of minutes, and most of the increase occurs in the first 10 minutes. Follow these tips to help prevent hot car deaths and keep kids safe this summer.

"She would run towards him, saying, 'Daddy, daddy,'" the family member said. "After work, when he would come out, she would want him to take her to the store every day and whenever he would go to work, she would want to go work with him." Police reports even detail how Ruben would remind Mojica to be careful about leaving kids inside of hot cars. In a statement of probable cause to arrest Mojica, Visalia police described the tests they conducted inside Mojica's car the day after Jessica died. Temperatures reached a high of 131 degrees. Ruben is crushed by his daughter's death, but he hopes all adults can learn something from her tragic story. "To pay attention to their kids whenever they stay at the car, because it happened to him and it could happen to other people," the family member said. Mojica is scheduled to be back in court next Tuesday. She's being held at the Tulare County Adult Pre-Trial Facility. If convicted, she faces 10 years in prison.

A mother and her infant daughter were ejected from their vehicle following a crash that injured another person in Torrance Thursday afternoon.

A driver was suffering a medical emergency on an Atlanta highway. A bystander's dramatic video shows a group of good Samaritans reaching him by smashing out the rear window of his pickup truck.

A man who was beaten outside a hookah lounge in North Hollywood says he was the victim of a hate crime and was targeted because of his sexuality.

A suspect has been arrested in the deadly movie theater shooting in Corona that left Rylee Goodrich dead and a TikTok influencer on life support.

"It sounded like a bomb." Video shows the moment a two-car crash sent a bus careening into a pole in the Bronx.

A 20-year-old man has been charged in connection with the shooting death of a Rite Aid employee in Glassell Park who was killed while confronting shoplifters.

1 killed, 1 wounded in shooting at Corona movie theater during showing of 'Purge' sequel

Someone opened fire inside a Corona movie theater late Monday night during a showing of the new "Purge" sequel.

A gunman fatally shot Army veteran Ismael Zabala while he was enjoying a family birthday celebration in Lancaster last year.

Video: Fight breaks out on 60 Freeway in Ontario after crash, officer tackles men to ground

Video shows a fight that started on the 60 Freeway in Ontario and had to be broken up by police.

At Providence Saint Joseph Hospital in Orange, at least one unvaccinated COVID patient says he's still not convinced that the vaccines are safe.

The remains of 17-year-old Jack Cantin have been found three years after he went missing when Montecito was hit by a devastating mudslide, according to his mother.